Nakba Day*
A demonstration on May 16, 2019 sponsored by the Anti-War Committee, Twin Cities
Talk by Women Against Military Madness member
Sara Olson 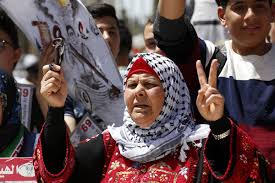 From the 1970s through 1994, I was deeply involved with the majority black South Africans’ struggle to end the minority whites’ apartheid system of governance. I lived in southern Africa—in Zimbabwe when majority rule replaced Rhodesian apartheid—for two years during that time. Little did I know that Israel was well on its way to development of a permanent apartheid system within its borders; socially, legally, politically, and physically. Physically, the system is evidenced by the overweening separation wall Israel built, an endless series of checkpoints Palestinians must negotiate to travel anywhere, and an American-style redlining structure that determines where and for how long Palestinians may live, much like the ones devised to keep African Americans and other populations in their appropriate places in the United States. Perhaps it follows, in terms of historical continuity, that the country that is most responsible for keeping Israel afloat, economically and militarily, for decades is the country that first enshrined legal apartheid in its constitution, the United States.
For most of its existence, Israel has been an arms exporter to supposedly friendly western nations. It supplied the Guatemalan army with the majority of its weaponry in the 1980s, kept Reagan’s Nicaraguan Contras well-armed to the tune of hundreds of tons of weaponry to fight the Sandinista government, trained and armed private security forces for large, private landowners in Colombia and in Marcos’s Philippines. American-favored dictators were all armed by Israel.

A decade ago, Sasha Polakov-Suransky revealed in the book, The Unspoken Alliance, that post-apartheid documents show that Israel offered to help apartheid South Africa develop nuclear weapons. Israel, in the 1960s, came to view South Africa as a kindred state with an oppositional, ethnic enemy within its borders much like the Palestinian presence in Israel. Both states saw themselves as unfairly criticized for their hostile treatment of internal enemies by a hypocritical world. Both states wanted to prevent the majority populations from ever gaining any power. Israel offered to trade South African uranium for Israeli technology and, subsequently, both states secretly produced nuclear weapons. Although South Africa voluntarily dismantled its nuclear arsenal to keep it out of the hands of the African National Congress when it came to power at the end of apartheid, Nelson Mandela said, “The people of South Africa will never forget the support of the state of Israel to the apartheid regime.”

Today is the anniversary of the Nakba. Women Against Military Madness supports the Palestinian people on the day of their commemoration of the catastrophe that enshrined formal occupation of their land and its people, the creation of massive refugee camps in neighboring countries, and overall death and destruction.

But, like apartheid in South Africa, I believe Israeli apartheid too will fall. There are growing signs that the people of the United States are slowly coming out of their long stupor of support for an apartheid regime in Israel, just as they did for the one in South Africa. Despite attempts by both major American political parties to suppress opposition, American campaigners are refusing to bow to the truth of Israel’s increasingly far right government to further permanently steal and occupy Palestinian land, to kill Palestinians at will, and to foment regional wars in the Middle East. Israel’s leaders will continue to experience some success with their machinations in the near future, but they will one day fall and not only the Palestinians, but the rest of the world, will be better off for it.

For more information contact the WAMM Middle East Committee, 612-827-5364. Join a weekly vigil for Palestinian rights every Friday from 4:30 to 5:30 at Summit and Snelling in St. Paul.

*Nakba Day is generally commemorated on 15 May, the day after the Gregorian calendar date for Israeli Independence Day. For the Palestinians it is an annual day of commemoration of the displacement that preceded and followed the Israeli Declaration of Independence in 1948. Wikipedia

Anthropology Graduate Student Association at the University of California, Los Angeles on May 29, 2019 on Mondoweiss

Donate
By Rise Up TimesPublished On: May 30th, 2019Comments Off on Nakba: A Remembrance, A Call to Action