Coleen Rowley, Mel Reeves, and Sue Ann Martinson talk about Julian Assange and the endangering of investigative journalism around the threat of indictment.

Sponsored by Mayday Books. Video by

Coleen Rowley, retired FBI agent and former Minneapolis Division Legal Counsel who wrote a whistleblower memorandum about the FBI’s pre 9-11 failures in connection with the Joint Intelligence Committee Inquiry and then testified about these problems to the Senate Judiciary Committee. A couple months after being named one of TIME’s 2002 “Persons of the Year,” she wrote a second memorandum to FBI Director Mueller critical of his role helping lie us into war on Iraq and warning it would prove disastrous.

Sue Ann Martinson, a long-time WAMM member, is the editor of RiseUpTimes.org: Justice- and peace-seeking commentary and thought- provoking media analyses about current issues in these Rise Up Times: information, stories, discussion, videos and perceptive views on current events and media issues.

TRANSCRIPT of Sue Ann Martinson’s talk (other transcripts are not available):

RETHINKING POLITICS IN THE SOCIETY OF THE IMAGE*

AUDIO-VISUAL REPRESENTATIONS have transformed not only the landscape of cultural production and reception, but the very nature of politics itself, particularly the relationships among nationalism, spectacular violence, and a new global politics. …It is impossible to comprehend the political nature of the existing age without recognizing the centrality of the new visual media [in all its forms].

…as novelist and cultural critic Marina Warner puts it, “in the realm of culture, the character of our representations matter most urgently. …The images we circulate have the power to lead events, not only [to] report them, [and] the new technical media have altered experience and become interwoven with consciousness itself.”

The force of culture is now writ large within circuits of global transmission that defy both the military power of the state at the same time reinforcing the state’s reliance on military power to respond to the external threat [NATO expansion] and to control its own citizens. In the United States, the war against terrorism, with its requisite constant story line of fear dominating every conceivable media outlet, creates the conditions for transforming a weak American democracy into a dangerous authoritarian state.

The merging of spectacle, terrorism, war, and politics, suggests something unique about the deadly power and battle of images in contemporary global culture. A cinematic politics of the visceral has replaced the more measured and thoughtful commentary on human suffering and alienation.

Giroux uses “shock and awe” and the 9/11 attack on the World Trade Center as examples. 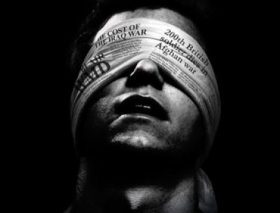 I bring this up because, while these visuals are used as a tool to control U.S. citizens and others worldwide, in the case of Collateral Damage and all that short video visually explains and implies, I see the reason for the persecution (and attempted prosecution) of Julian Assange of Wikileaks.

The “warmakers,” the ruling elite who wish to control the world, including of course the USA, found this short video taking its place in global politics and belying all their efforts at spectacle such as the “light show” that was “shock and awe” and the visuals of the demise of the towers and surrounding buildings along with the people of courage who responded and the tragic deaths of others. I can play images of 9/11 back in my mind like a movie. Too much like a movie, and that makes it almost unreal, as the disaster movies, as I call them, have so normalized violence.

Except it was real.

Not as spectacular as “shock and awe” or movie-like as the filming of 9/11 with the tragedies of the dead and injured and the many heroes, the Collateral Damage video nonetheless challenges all their efforts— efforts that have exploded under Trump—to criminalize the media and to control the people through propaganda. Collateral Damage takes its place on the stage of global politics, painting an entirely different picture of a non-benevolent and bullying government with a military arm killing innocent people with the ease of a pin-ball machine game, or more recent sophisticated versions of the same, the apparent model for the drone-killing machines.

WikiLeaks has leaked many other stories, types of documents, and so on, but the accusations presented by the Trump administration all focus on Assange and Manning and that means above all the Collateral Damage video.

The charges are not new; they are the same as the charges under the Obama administration. The Obama Department of Justice (DOJ) ultimately understood the powerful peril to freedom of the press and all media worldwide by pursuing WikiLeaks and the relationship of a journalist, Assange, to his source, Manning, and decided not to prosecute.

The Trump DOJ case evidently rests on the accusation that Assange was helping Manning to find classified information in databases by using a different user name to protect her anonymity.

Glenn Greenwald in his article ”The U.S. Government’s Indictment of Julian Assange Poses Grave Threats to Press Freedoms” on The Intercept, which I recommend, goes into great detail about why this is a specious charge because what Assange was doing was protecting his source, a long-standing right of journalists to protect the anonymity of their sources. Assange was not encouraging ‘hacking”; Manning was not ‘hacking.’

Although the indictment does not cite ‘hacking’ as a charge, the Trump DOJ sent out a press release that used the term ‘hacking.’ Media across the country picked up the term and spread it across headlines. The release was on April 11 th. On April 12th, having read Greenwald’s article, I was in a store where the Star Tribune and Pioneer Press were displayed. Both had front-page articles about Assange that used ‘hacking’ in the title.

One of the characteristics of fascism is “controlled mass media.” I may not totally understand all the legal ramifications of an indictment of Assange, but even the experts are evidently unclear from what I have read on the web about how the indictment may play out legally.

What is very clear to me are two threats: First is the threat to the rulers of U.S. empire that the short and succinct video Collateral Damage embodies; and why Assange, WikiLeaks and Manning and others like them need to be silenced by the warmakers because they tell the truth and counter their propaganda. Second, the indictment is a grave threat to press and media freedom by criminalizing investigative journalism, and is one more step in establishing an authoritarian fascist state.

*Giroux’s  “Rethinking Politics in the Society of the Image” was published in Situations, the journal of the Institute for the Radical Imagination, Vol. 2, No 1 (2007) as part of the essay “Beyond the Spectacle of Terrorism.”

*Giroux’s essay draws on ideas from Giroux’s book, Beyond the Spectacle of Terrorism: Global Uncertainty and the Challenge of the New Media (Boulder, Colorado: Paradigm Publishers, 2006).

Donate
By Rise Up TimesPublished On: May 15th, 2019Comments Off on The Warmakers Assault on Free Press:  Manning, Assange, WikiLeaks and US War Crimes, a panel with Coleen Rowley, Mel Reeves, Sue Ann Martinson