It’s worth remarking that fires from even a very “limited” use of a small number of modern nuclear weapons would create so much soot and ash that the consequent collapse of agriculture could cause the famine death of two billion people. 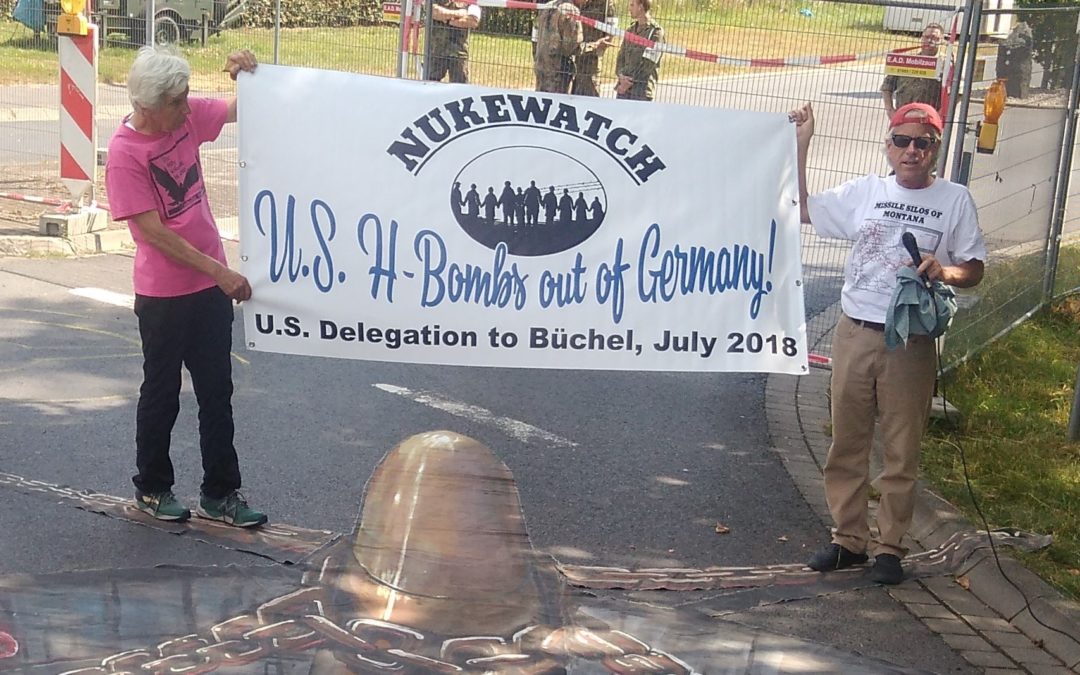 Nukewatch members are among activists from throughout the world who gather at Buchel Air Base to protest U.S. nuclear weapons and call for their elimination in Europe. Photo: Nukewatch

Decades after the Cold War, 20 U.S. nuclear bombs remain at an air force base in Germany, and the Germans want them gone.

Instead of removing these B61 bombs from German soil, the U.S. plans to replace them with a modernized version: the B61-12 (classified as “hydrogen” or “H” bombs). These new bombs are scheduled to be built in the U.S. by 2020, then deployed at the Büchel Air Base in Germany, and in four other European countries: Italy, Belgium, the Netherlands, and Turkey. An antinuclear campaign, “Büchel Is Everywhere: Nuclear Weapons-free Now!” has responded with the goal of preventing this from happening.

According to AirForce-technology.com, the U.S. bombs can be air-launched by warplanes such as the B-2s, F-15s, F-16s, and Germany’s Tornado PA-200 fighter jets.

German Tornado pilots are trained and obligated to take off with these U.S. bombs and, under orders from a U.S. president, to attack populations deemed the enemy. This unlawful and terrifying war plan is part of a “nuclear sharing” agreement between the U.S. and the cooperating European nations. It includes a first-strike option considered necessary by the U.S. and the North Atlantic Treaty Organization (NATO), to which these nations belong. NATO calls its weapons proliferation “power and burden sharing,” and it currently involves nuclear war exercises next to the East-European Russian border—one such exercise was code-named “Anaconda”—involving tens of thousands of soldiers and extensive maneuvering of heavy military equipment.

Like the current B61, the new precision guided B61-12 is a weapon of mass destruction, which experts have called illegal under German, U.S., and international law.

Three U.S. National Laboratories where nuclear weapons are developed—Los Alamos and Sandia in New Mexico, and Lawrence Livermore in California— designed the new B61-12. Component parts are being made at the Y12 complex in Tennessee, the Kansas City plant in Missouri (formally the “Kansas City National Security Campus”), and at Sandia. Final bomb assembly takes place at the Pantex weapons assembly site in Texas. Major contractors are Boeing, Lockheed-Martin, Honeywell, and Bechtel. Hans Kristensen of the Federation of American Scientists has reported that 400 new B61-12s are planned and each weapon will cost at least $25 million ¾  a whopping $10 billion for the entire upgrade.

After Detonation: Firestorms and Nuclear Winter

But what would it look like if these B-61s were actually put into use? In 1985 the U.S. National Academy of Sciences (NAS) explained that among the consequences of a large-scale nuclear war between the United States and what was then the USSR “…the primary mechanisms for human fatalities would likely not be from blast effects, not from thermal radiation burns, and not from ionizing radiation, but, rather, from mass starvation.” The NAS study said that the resulting nuclear winter would cause “the loss of one to four billion lives.”

Thirty years later, scientists and doctors dramatically adjusted the mathematics of doomsday taking heed of new information about nuclear weapons-caused firestorms and climate disruption. Left out of those grim NAS calculations in 1985 had been the effect of mass firestorms caused by nuclear weapons being detonated on urban areas. A forewarning has come in the book Whole World on Fire (Cornell Univ. Press, 2004), by Lynn Eden, in which she noted, “For more than 50 years, the U.S. Government has seriously underestimated damage from nuclear attacks.”

“The failure to include damage from fire in nuclear war plans continues today,” Eden wrote. “Because fire damage has been ignored for the past half-century, high-level U.S. decision makers have been poorly informed, if informed at all, about the extent of damage that nuclear weapons would actually cause. As a result, any U.S. decision to use nuclear weapons almost certainly would be predicated on insufficient and misleading information. If nuclear weapons were used, the physical, social, and political effects could be far more destructive than anticipated.”

It’s worth remarking that fires from even a very “limited” use of a small number of modern nuclear weapons would create so much soot and ash that the consequent collapse of agriculture could cause the famine death of two billion people. This was the conclusion of Ira Helfand, MD, who wrote Nuclear Famine: Two Billion People at Risk, (2nd ed. November 2013. Physicians for Social Responsibility), for the International Physicians for the Prevention of Nuclear War and Physicians for Social Responsibility. The B61-12s planned for Germany are as many as three times the size of the Hiroshima bomb ¾ yet, they are considered small compared to any of the other nuclear weapons currently deployed.

What nuclear war planners in the U.S. Navy and the Air Force, or ignorant sociopaths like Mr. Trump ignore or fail to grasp is this (from Whole World on Fire): “Within tens of minutes after the cataclysmic events associated with the [nuclear] detonation, a mass of buoyantly rising fire-heated air would signal the start of a second and distinctly different event—the development of a mass fire of gigantic scale and ferocity. This fire would quickly increase in intensity. In a fraction of an hour it would generate ground winds of hurricane force…”

People in Germany and around the world are aware of these consequences, and the global movement to eradicate nuclear weapons has been revived.

The greatest manifestation of this global antinuclear movement is the Treaty on the Prohibition of Nuclear Weapons.* It was signed at the United Nations by 70 countries in 2017, and 22 countries have since ratified it. German political decision-makers refused to take part in the negotiations for the treaty ban and have refused to sign it—following the bad example of the United States, most NATO members, and all other nuclear-armed states. However, 50 ratifications are needed for it to become international law, a goal that may be reached this year.

The planned replacement of the B61s in Germany is moving ahead despite the fact that on March 26, 2010, the German parliament overwhelmingly approved a cross-party resolution calling on the government to pursue their permanent removal. A 2016 poll shows that about 90 percent of the German public is against the presence of the U.S. nukes. The creation and installation of the modernized B61s disregards the huge majority public support for a denuclearized Germany and the Treaty on the Prohibition of Nuclear Weapons adopted by the United Nations in 2017. 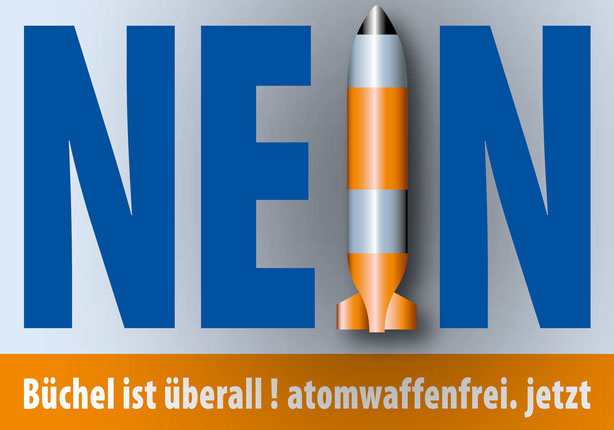 A nuclear-free weapons campaign logo proclaims, “Büchel is everywhere! Nuclear weapons free.now”  This campaign is the winner of the Aachen Peace Prize, announced May 8, 2019.

Within Germany there is a strong nationwide campaign called “Büchel Is Everywhere—Nuclear Weapons-free Now!” which is comprised of 60 groups and organizations that are focused on nuclear abolition. Aside from conducting lobbying work, “Büchel Is Everywhere” engages in nonviolent direct action which increases awareness and political pressure, keeps the B61 issue in the public eye, and challenges the legalities of the “nuclear sharing” and of nuclear weapons themselves in court. Nukewatch, a Wisconsin-based antinuclear organization, is the first non-German organization to join the campaign.

In 2017, during Germany’s nationwide election campaign, Social Democrat Party leader Martin Schulz promised he would demand removal of the U.S. weapons if he became chancellor—and Germany’s Foreign Minister Sigmar Gabriel publicly endorsed Schulz’s promise at a Washington, D.C. press conference. Also, Germany’s Left Party called for a parliamentary decision to remove the B61s, and the permanent removal of the bombs is part of the Green Party’s platform. These parties need to be pressured to take further actions. Politicians know that when Germany steps out, it will affect future decisions of the four other “nuclear sharing” countries (Belgium, Holland, Italy, and Turkey). A “domino effect” is possible, so the best time to stop the B61-12 program is now—before it goes into production.

The Resistance That Can End the Bombs

In 2016, 2017, and 2018, twenty weeks of nonviolent actions took place with participants from over 50 organizations creating a Peace Camp just outside the Büchel Air Base. On July 17, 2017, U.S. delegates personally delivered a copy of the new Treaty on the Prohibition of Nuclear Weapons to the commander of Büchel Air Base. Last year, 10 campaigners from the U.S. joined with dozens from Holland, Belgium, and France, and the International Youth Group from Mutlangen, Germany.

During 2017 and 2018, ­­­Nukewatch joined dozens who entered the base occupying aircraft bunkers where nuclear weapons are stored. This nonviolent direct action has resulted in arrests, offering antinuclear campaigners another platform to make their case against nukes; in court they use international law to express how their actions were necessary to prevent use of a nuclear weapon, a much larger crime. This year, 2019, will mark the third gathering of European activists with antinuclear resisters from the United States who join with them because they acknowledge the responsibility of the U.S. government and weapons manufacturers in making the new bombs.

Nukewatch is a Wisconsin-based environmental and peace action group dedicated to the abolition of nuclear power, weapons, and continued radioactive waste production. Staff and volunteers advocate Gandhian nonviolence in education and action, and report on nuclear issues in the Nukewatch Quarterly.

The original source of this article is Women Against Military Madness. Further distribution is encouraged with attribution.

Stop the Bombs International Week, July 8 to 16, 2019 Nukewatch invites peace, antinuclear, environmental, and student activists to participate at the peace camp near the main gate of the Büchel Air Base in Germany. The peace camp includes networking, training, and nonviolent civil resistance. International Week is part of 20 weeks of action to stop 20 bombs.

20 Weeks of Action to Stop 20 Bombs March 26 to August 9, 2019 The number of weeks represents the number of B61 bombs deployed at Büchel. This year, groups and individuals will conduct nonviolent actions at Büchel Air Base to pressure the German government and to remind lawmakers of their various promises to permanently eliminate the U.S. nuclear weapons.

Additional Information from the German coordinators of the camp: www.buechelatombombenfrei@de

WAMM’s annual Walk Against Weapons will take place this year around Como Lake in Como Park in St. Paul on June 1, 2019, 10:30 to 12:30.  For more information click here. To donate to the Walk on Facebook, click here.

The contents of Rise Up Times do not necessarily reflect the views of the editor. This article was chosen for republication based on the interest of our readers. Rise Up Times republishes stories from a number of other independent news sources as well as publishing original articles.

Donate
By Rise Up TimesPublished On: May 15th, 2019Comments Off on New U.S. Nuclear Bombs Heading for Europe: What Can Stop Them?