I recently attended a talk by Rose Grengs, retired immigration lawyer, that was sponsored by Every Church a Peace Church. Here is some of the information she shared.. Rose has led tours to the border several times and presented slides of her trips.

Sonia Nazario’s article is posted below. But first, some words about the EndStreamline project that criminalizes immigrants. 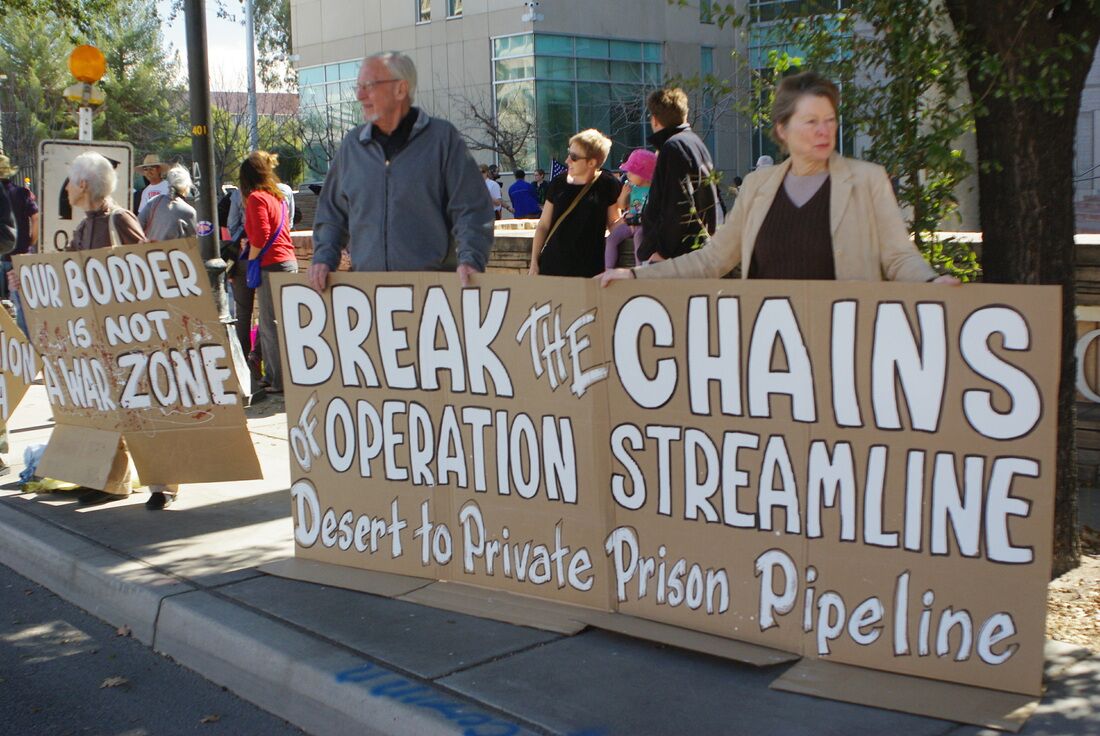 Operation Streamline is an initiative of the Department of Homeland Security and the Department of Justice launched in 2005 under a “zero-tolerance” policy to prosecute unauthorized immigrants as criminals. Streamline courts were created to deliver en masse fast-track criminal court proceedings.

What happened prior to Streamline?

Being in the United States without proper documentation is a violation of immigration law, which is a civil not a criminal matter. Prior to Operation Streamline, U.S. attorneys were able to exercise prosecutorial discretion, initiating civil deportation proceedings against most undocumented immigrants while reserving criminal charges for repeat entrants or those with criminal records.

…principled immigration reform that addresses the root causes of migration and without provisions that would increase criminalization of migrants in the future in exchange for legalizing undocumented community members now.

I’m a Child of Immigrants. And I Have a Plan to Fix Immigration.

Neither Democrats nor Republicans will like it. But it would be humane, it would adhere to the rule of law, and it would work.

An immigration lawyer once told me bluntly: Immigration is a wedge issue.

Wedge issues don’t get resolved. They get used by both sides to mobilize their base. Exhibit A: President Trump’s seizing on the caravan of migrants two weeks before the midterm elections. On Thursday news leaked that the president is considering announcing a plan to shut down the southern border entirely for nearly all asylum seekers.

I have covered immigration for three decades. I am the child of immigrants, the only one in my family born in this country. I have twice made the same journey those in the caravan are making, traveling the length of Mexico with Central American migrants. These people deserve our compassion. But I lived in Argentina during the military dictatorship, and I also believe that nations must preserve the rule of law.

For anyone who actually wants to work to resolve the immigration issue — not just use it to bludgeon the other side — I have a plan. Neither Democrats nor Republicans will love all of it. But it is relatively humane and fair, it would keep more migrants at home, where most would rather live and, unlike President Trump’s proposal, it would actually adhere to the rule of law.

First, some facts. The flow of migrants is a quarter of what it was at its high point in 2000 and it is no longer predominantly made up of Mexicans seeking a better life. Now, the majority of migrants are from El Salvador, Honduras and Guatemala, and most are coming because someone back home is trying to harm or kill them and their governments cannot or will not protect them.

Even those who say they are leaving their countries because they lack jobs are often indirect victims of violence and political corruption. I have spent time in a neighborhood in Tegucigalpa, Honduras, where a majority of businesses have shut down because gangs demand weekly war taxes. Failure to pay equals death.

President Trump is threatening to cut foreign aid to punish these countries for not, as he sees it, doing enough to stop the caravan. That is among the dumbest things he could do. Foreign aid pays for programs that are actually making headway in reducing the corruption and violence that drive people to migrate.

Anti-corruption programs are already under siege. The Mission to Support the Fight against Corruption and Impunity in Honduras, an initiative through the Organization of American States, was pursuing an embezzlement case against five members of Congress until legislators passed a law effectively putting it in the hands of an organization they themselves controlled.

Meanwhile, in Guatemala, President Jimmy Morales announced that he would not authorize the International Commission Against Impunity in Guatemala to even remain in the country. It has had notable success in fighting organized crime and led to the jailing of former president Otto Pérez Molina and his vice president for overseeing a customs-fraud network. One of group’s main focuses now, not surprisingly, is investigating the current president, Mr. Morales, for corruption.

The United States has supported these two organizations, but now, President Trump and his administration are doing virtually nothing to protect them.

People have lost hope that anything will change in these countries. We should not be surprised that they are voting with their feet.

But I get it: 396,579 migrants apprehended at our border in one year is still a lot of migrants. What will slow the flow?

We know that deterrence doesn’t work. A nonprofit I’m on the board of, Kids In Need of Defense, represented a mother who had four children, including a 5-month-old breast-feeding baby, snatched away from her at our border this summer. For weeks, the mother — and our government — had no inkling where that baby was. When the government, under court order, returned the mother’s four children, it handed her the wrong baby. After she was given the right baby, the whole family was deposited, at midnight, at a Texas bus station — with zero money.

We have been revoltingly inhumane. And yet, they keep coming.

That’s because when someone is trying to kill you in the next 24 hours, you can’t afford to worry about what you will face weeks or months from now when you reach the United States border.

So here’s my proposal. First, we must address the violence and despair that are pushing migrants out of these three countries.

The good news is we already know how to reduce violence and corruption, and strengthen good government. In Honduras, the United States has been running pilot violence prevention programs since 2014. In neighborhoods like Rivera Hernández in San Pedro Sula we have funded outreach centers where children can find mentors and help getting jobs, cutting off the gangs’ lifeblood: new recruits. We put children most at risk of joining gangs in family counseling. And most important, we went after killers.

In 96 percent of homicides in Honduras in recent years, no one was convicted. Witnesses know: you testify, and the gang kills you immediately. The United States helped fund a nonprofit, the Association for a More Just Society, to investigate all murders in the most violent neighborhoods. It persuades witnesses to testify, anonymously, covered in a black burqa. In Rivera Hernández, murders plummeted by 62 percent in two years. And the number of Honduran children showing up at the United States border was cut almost in half.

But there’s so much more work to be done. After all, San Pedro Sula is the exact place where today’s caravan of desperate migrants originated.

I get blowback from liberals when I advocate this kind of meddling in Central America. I understand; I covered the wars in Central America. Yes, the United States has done a lot of bad things there. We supported right-wing regimes; deported some 300,000 criminals who added rocket fuel to fledgling gang violence in these countries; and squeezed cocaine traffickers’ routes so that they rerouted drug flights, and the attendant violence, through Central America instead of the Caribbean. We are the source of much of the mayhem there.

But now some of what we are doing is actually working. Shouldn’t we do much more of it?

It not only works, it is cost effective: When I investigated these pilot programs in 2016, they cost about $100 million a year, pocket change compared to the billions we spend dealing with migrants once they reach our border.

While we work to address root causes, we must remain compassionate toward those who make it to our borders and ask for safety. Our laws protect their right to do so.

This fiscal year, 50,036 unaccompanied migrant children were apprehended coming to the United States. They wouldn’t even fill up half a Penn State football stadium. That’s refugee dust, as one friend quipped — especially given the fact that the world is facing the worst refugee crisis since World War II.

We must release asylum seekers while their immigration court cases proceed — not lock almost all of them up, as this president is doing, in inhumane for-profit prisons. What kind of country takes someone who asks for safety and throws him into a prison like Adelanto Detention Facility, in California, where a recent surprise federal inspection of 20 cells found 15 contained nooses made of bedsheets? No one had bothered to take them down.

We should instead release asylum applicants, even if it involves outfitting them with ankle monitors.

We must also ensure that these hearings involve real due process. Children who arrive in this country alone are not entitled to a government-funded lawyer. And so children — toddlers even — are expected to argue complex asylum cases on their own. This makes a sham of our judicial system.

Immigration courts should be taken out of the Trump administration’s Justice Department and made independent, like the United States Tax Court already is. The union representing immigration judges says this is necessary to ensure that judges operate as impartial arbiters of the law. It would also free them from ridiculous rules, like the one Attorney General Jeff Sessions put in place demanding that immigration judges process 700 cases a year — more than double what’s reasonable.

Here’s the part liberals will hate. We must be tougher toward immigrants who get real due process but still lose their asylum cases. We should empower and fund Immigration and Customs Enforcement to find, arrest and deport 100 percent of those who lose their cases. That’s the rule of law.

The truth is that ICE now has the manpower to arrest and deport only an estimated 4 percent of those in the United States illegally. This president’s approach is to target everyone indiscriminately, and engender widespread fear. Instead we should focus on newcomers, not migrants who have been here for decades, put down roots and have United States citizen children. If we do this consistently, it may actually deter those who don’t have a real claim to asylum.

Conservatives won’t like my call to treat asylum seekers humanely — Unicef says there are 2,300 children in this caravan— and give them due process. Liberals won’t like my call to meddle in Central American politics and sic ICE on every asylum seeker who lost after a fair hearing. But Democrats, especially, need a strategy that goes beyond simply opposing President Trump’s policies and also appeals to Americans’ legitimate desire for law and order.

Republicans need a compassionate plan. Democrats need an actual plan. Or the caravans will continue.

Sonia Nazario is an award-winning journalist whose stories have tackled some of this country’s most intractable problems — hunger, drug addiction, immigration — and have won some of the most prestigious journalism and book awards, including two Pulitzer Prizes. She was also a finalist for a third Pulitzer, in Public Service.

She is best known for “Enrique’s Journey,” her story of a Honduran boy’s struggle to find his mother in the U.S. Published as a series in the Los Angeles Times, “Enrique’s Journey” won the Pulitzer Prize for feature writing in 2003. It was turned into a book by Random House and became a national bestseller.

Her recent humanitarian efforts to get lawyers for unaccompanied migrant children led to her selection as the 2015 Don and Arvonne Fraser Human Rights Award recipient by the Advocates for Human Rights.

Donate
By Rise Up TimesPublished On: April 11th, 2019Comments Off on I’m a Child of Immigrants. And I Have a Plan to Fix Immigration. By Sonia Nazario, and End Project Streamline