These talks at the Hope in the Time of Trump conference organized by the Yorkshire Campaign for Nuclear Disarmament include three excellent speakers: Paul Rogers, Current threats to peace and how we respond; Janet Fenton, Progress on the Treaty for the Prohibition of Nuclear Weapons; and Fabian Hamilton (MP), Labour’s Peace Doctrine. Each talk is less than 15 minutes.

We had some excellent speakers for our Hope in the Age of Trump meeting in Leeds, for those who weren’t able to be there we’ve included audio or video below.

Paul Rogers – Current threats to peace and how we respond 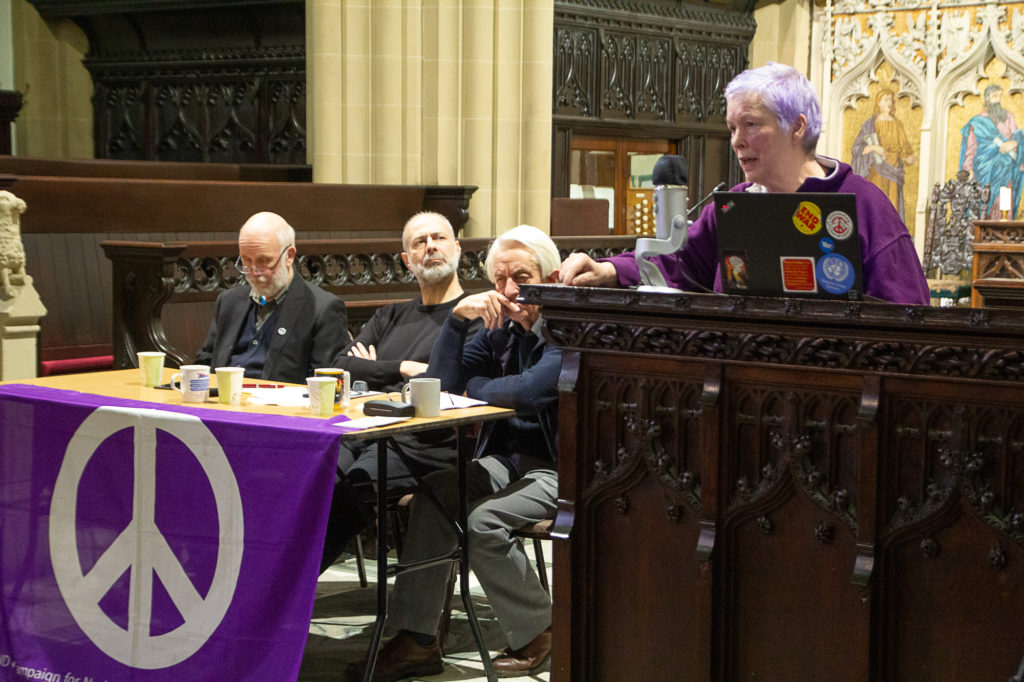 (Note the WAMM End War sticker on her computer.)

Paul Rogers (born 10 February 1943) is Emeritus Professor of Peace Studies at the University of Bradford and Global Security Consultant with Oxford Research Group (ORG). He has worked in the field of international security, arms control and political violence for over 30 years. He lectures at universities and defence colleges in several countries and has written or edited 26 books, including Global Security and the War on Terror: Elite Power and the Illusion of Control (Routledge, 2008) and Why We’re Losing the War on Terror (Polity, 2008). Since October 2001 he has written monthly Briefing Papers on international security and the “war on terror” for ORG. He is also a regular commentator on global security issues in both the national and international media, and is OpenDemocracy’s International Security Editor.[1]  In the 1960s he worked with the Haslemere Group, an early pressure group on trade and development issues before embarking on an academic career first at Huddersfield and then at Bradford.[2]  He holds a BSc and PhD from Imperial College London. (Information from Wikipedia) [3]

Janet Fenton is an antiwar activist, a member of the Women’s International League for Peace and Freedom (WILPF), and freelance writer and communicator. (Information from Facebook)

Donate
By Rise Up TimesPublished On: February 24th, 2019Comments Off on Hope in the Time of Trump, Yorkshire CND