Further thoughts on Unity and Diversity

John Dear’s essay on “Unity and Diversity in the Land of Nonviolence” referenced in Part I was published in the journal Oneing in an issue with the theme of  “Unity and Diversity.” In the opening essay of the journal author Joan Brown says: “The Universe thrives upon, and cannot exist without, diversity.” Like Chris Hedges, she talks about “separation” or “separateness,” as an alienation that plagues our society, and she endorses community. On the practical side she references Rev. Barber from the The Poor People’s Campaign:

[Barber] sought to bring together people of diverse backgrounds, classes, and races in a moral movement, holding together overarching issues of racism, poverty, militarism and ecological devastation. Not everyone worked on all these concerns, but everyone held a consciousness of the diverse concerns and worked in communion for the common good because everything intersects.

Brown goes on to quote Pope Francis from Ladato Sí:

Since everything is closely interrelated and today’s problems call for a vision capable of taking into account every aspect of the global crisis, I suggest that we now consider some elements of an integral ecology, one which clearly respects its human and social dimensions.

Brown says regarding separateness: “Nothing is independent and ‘the fragmentation of knowledge and the isolation of bits of information can actually become a form of ignorance, unless they are integrated into a broader version of reality.’”

Henry A. Giroux, in his many essays and books, analyzes topics from Trump to Kavanaugh, from Flint to Ferguson, and Sandra Bland and police brutality; addressing issues around education, especially America’s youth, around militarism, around neoliberalism and neofascism, he always recognizes and remarks upon the interrelation of issues into that ‘broader vision of reality’ that is integrated into his work. In an interview by Project Censored, he says:

Economic pillage has reached new and extreme levels and is now accompanied by a ravaging culture of viciousness and massive levels of exploitation and human suffering. Trump has turned language into a weapon with his endless lies and support for white nationalism, nativism, racism and state violence. This is a language that legitimates ignorance while producing an active silence and complicity in the face of an emerging corporate fascist state. 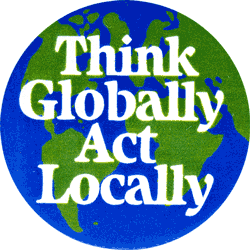 As Giroux observes, Trump has turned language into a weapon for his lies, language that reflects hate and fear: rampant racism (the Ban, the Wall, the children in cages, the many ICE deportations, the troops at the border), and state violence in the form of rolling back EPA and financial protections and increasing military spending and drone strikes.

That old expression, “you are what you eat” could be modified to “you are what you say.”  It’s not that we should be “word police” but the language of violence sneaks in many places these days. In sports it has always been there in the headlines. But recently a progressive group sent me an email with a headline with the word ‘bomb’ in it used as a sensational metaphor around some political issue. I immediately unsubscribed. There’s no reason to stoop to the level that generates hate and fear. Violent language is often used for description in the mainstream corporate media, in social media by individuals, and in TV shows and movies when other language would be more descriptive and specific, a trend that overall reinforces the normalization of violence.

Nomi Prins approaches the dilemma we are in from a financial perspective:

The financial crisis of 2008 initially fostered a policy of bailing out banks with cheap money that went not into Main Street economies but into markets enriching the few. As a result, large numbers of people increasingly felt that they were being left behind and so turned against their leaders and sometimes each other as well.

This situation was then exploited by a set of self-appointed politicians of the people, including a billionaire TV personality who capitalized on an increasingly widespread fear of a future at risk. Their promises of economic prosperity were wrapped in populist platitudes, normally (but not always) of a right-wing sort. Lost in this shift away from previously dominant political parties and the systems that went with them was a true form of populism, which would genuinely put the needs of the majority of people over the elite few, build real things including infrastructure, foster organic wealth distribution, and stabilize economies above financial markets.

In the meantime, what we have is, of course, a recipe for an increasingly unstable and vicious world.

That unstable and vicious world is manifested in many ways, not the least of which is our use of increasingly violent language, and not just by the right-wing supporters of the current administration.

The unstable and vicious world is the world of hate and fear that is so predominant in our culture now. And yet there is hope. There are many more cultural events around peace, around decency, around the common good. Many are in one form or another resisting the moral degradation that manifests itself in the wall, the ban, the caged children, the increase in homelessness, and the loss of working toward the common good. Sometimes this resistance is coming both locally and nationally through the churches, from progressive and radical groups, and from theaters, visual arts, music, spoken word and poetry.

Angela Davis in a talk at the University of Minnesota last fall identified the most pernicious threat to democracy and our well being inour time as capitalism, which drives the plethora of military spending and loss of lives as well as the fossil fuel industry, the two greatest threats to our existence. In her book Freedom is a Constant Struggle: Ferguson, Palestine, and the Foundations of a Movement she describes the need for a new language to counter the threats now facing us. The old language of resistance traps us in the past. We can learn from the past, but transform and apply it to the present situation.

We are facing double annihilation, climate change/chaos and nuclear war. Global unity is required to prevent this catastrophe. At the same time, many peace and justice issues need our attention: immigration rights, environmental degradation, LGBTQ rights, union/$15 wages, police brutality, homelessness, to name a few, and, of course, endless war.

Davis calls for intersectionality, an example being the people of Palestine supporting the activism for justice in Ferguson. Intersectionality links local issues in diverse communities who are facing similar problems and working on similar issues. And is a way of finding unity in diversity, a necessity in what has become a global struggle for the future of the planet.

We are engaged in a global struggle. In our best efforts we need to think globally and act locally. Locally is where the majority of us have power—people power. But at the same time we need to hold in our minds and hearts the global struggle, which is part of our struggle, and to join global struggles where and when possible, and always to mention global aspects of local issues when acting locally, concomitant global struggles, those that affect us both directly (some immigration issues for example) and indirectly, like the bombing and destruction of Yemen. To make the connections literally and figuratively among issues and actions is a way to foster Unity in Diversity and a way to foster collective identity. I go back to the No US/NATO Bases conference and the identified themes of unity, networking, and education.

This essay has covered a lot that is all part of a movement that is taking place in many different ways. I think of the Shakespearean phrase from The Tempest: But doth suffer a sea-change/ into something rich and strange that covers the need for a collective identity, for global awareness and global action, because we do not know exactly what forms changes will  take. But we do know we need change, and we need that change immediately. While many people are aware and active, many more need to be. The poor are busy surviving, yet some are better activists than those with resources who are in denial about climate change and believe the myth that we need all those military bases for defense.

The sea change is of course a cultural change, one that is slowly making inroads into the predominant paradigm of hate and fear being Trumpeted. The cultural change precedes the changes that then come in practical ways and that are even now being addressed daily in actions around the world that take place locally. And in those actions there is hope.

TOMGRAM: NOMI PRINS, A WORLD THAT IS THE PROPERTY OF THE 1%

‘IT IS TIME FOR PROGRESSIVES OF THE WORLD TO UNITE’: SANDERS-VAROUFAKIS ISSUE OPEN CALL FOR NEW GLOBAL MOVEMENT

The Abolition of War Requires New Thoughts, Words, and Actions  By David Swanson Remarks in Albuquerque, New Mexico, December 12, 2018 There’s action happening now in the U.S. Senate on ending U.S. participation in the war on Yemen. There’s a big loophole in the bill. There’s the matter of selling […]

Sue Ann Martinson is the editor of Rise Up Times.

Donate
By Rise Up TimesPublished On: January 3rd, 2019Comments Off on Seeds of Rebellion, Seeds of Transformation, Part II