Aida asked for solidarity from the international community. “I’m not calling for troops to come to Israel. I’m like you – women against militarization. But for sure I am calling for a political position by the international community of what is happening and what is going to be established. In my opinion this law is not only a colonial law but it is officially a declaration of the establishment of an apartheid regime in Israel. 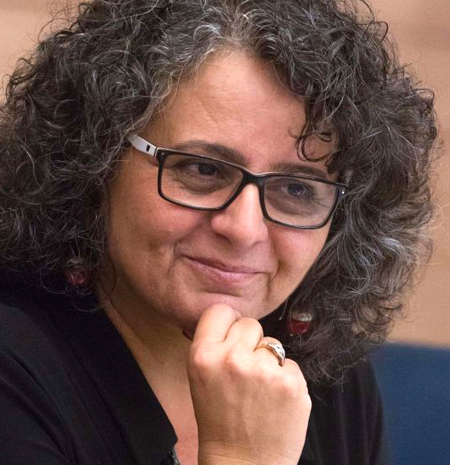 Aida Touma-Sliman, a Palestinian member of the Israeli Knesset, spoke at the UN and on a tour of the United States sponsored by the U.S. Peace Council. Born in Nazareth to a Christian Palestinian family, she currently lives in the Mediterranean coastal city of Acre. She was the first female member of the High Follow-Up Committee for Arab Citizens of Israel and co-founded the International Women’s Commission for a Just Palestinian-Israeli Peace. Synopsis of a talk sponsored by Women Against Military Madness in Minneapolis, August 26, 2018.

She went on to explain that just as Trump does not represent everyone in the U.S., Israel’s prime minister, Netanyahu, and the right-wing government do not represent all of Israel. The four Palestinian political parties: Communists, Islamists, liberals, and nationalists, in spite of their different ideological backgrounds, formed a block to gain representation in the Knesset (Israel’s parliament).  Aida therefore represents 20 percent of the citizens of Israel – that is, she said, “Palestinians who stayed in their homeland, Palestinians who managed not to be deported, who managed not to be thrown out of their homeland, and managed to grow in numbers.” But she made clear that she represents Jewish citizens as well. She continued, “I’m also representing the Jewish democracy forces who are interested to be partners in Israel for creating a different situation for the two peoples in that homeland.” 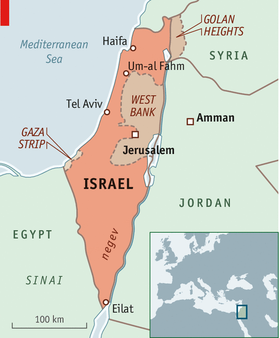 The new Jewish Nation State Law is “supposed to segregate Jews and Arabs.” But it has brought many together. When the new law was passed, Jewish citizens of Israel marched with Palestinians on the streets of Tel Aviv in protest because “they want to live in a normal state that is democratic, that is equal, and that is not practicing occupation anymore.”[1] The protesters –60,000 in number on August 11 – were evidence that “we [Palestinians] are not speaking about ourselves only. We are speaking in the name of those who refuse this new reality” [the Jewish- only state described in the new law]. This law is intolerable to many and exists “more for the fanatic right-wing, racist government who is ruling this country and not for the two peoples who are living there and the citizens of the country.”

This new law wipes out democracy and equality and establishes that Israel belongs only to Jews!

Aida’s speech is peppered with dark humor and irony because the internationally illegal Jewish-only settlements on Palestinian land are declared legal, but only under Israeli law. Regarding Palestinians, she says: “This is not our homeland, this is not our place. We are by chance there, you know.”

This law was passed at the unusual hour of five o’clock on July 19, 2018, in the Knesset as one of Israel’s Basic Laws. In its 70 years of existence, Israel never established a constitution. Instead it is governed by a series of laws called Basic Law. These laws avoid defining the borders of Israel and therefore allow for the development of Jewish-only settlements on land that Arabs have been driven from.  Discourse on borders confuses the land of Israel with the state of Israel. It erases the narrative of the indigenous Palestinian people who have existed in the land and claim it as their homeland.

With this new law, Netanyahu’s government ended the contradiction between Israel being both democratic and Jewish. Palestinian Knesset members combed through the text of the 2018 version of this law when it passed and found that Article 7 of the law “says very clearly that developing and building Jewish settlements is a national value.” The minute that the law established the Jewish-only settlements as a national value, then confiscation of land, moving people from their land, and demolishing their villages – things that were occurring regularly anyway – were encouraged under law and “the superiority of one group over the other is understood.” The new law stripped away any pretense of democracy and equality under the law. People can go to the Israeli Supreme Court and find discrimination upheld as law.

Aida addressed objections that some people have about interfering in the internal affairs of an independent sovereign state: As soon as you start to mix the external issue of the Occupied Territories with the internal government of Israel, it is not an internal issue.[2] The day before Aida spoke in Minneapolis, Israeli Minister of Education Naftali Bennett, a right-wing settlement promoter, had just celebrated at an illegal Jewish-only settlement on Palestinian-owned land. He gloated about the possibility of integrating the Palestinian territories, occupied since 1967 by the Israeli military, into the state of Israel: “We managed to change the discourse that is existing from a discourse of two states to a discourse of regaining our homeland, meaning the West Bank and Gaza.”

Another effect of the law, Aida said, is the “unification of Jerusalem as the capital of Israel, including East Jerusalem, which is by international law an occupied territory, along with the West Bank and Gaza.” U.S. President Trump’s daughter Ivanka and her husband Jared Kushner were main participants in the presentation ceremony, with Israeli Prime Minister Netanyahu, when the U.S. declared that Jerusalem is the capital of Israel.

When the Israeli government speaks of “disengagement” of the Occupied Territories, it does not signal intent for Israel to withdraw its military forces – rather, it signals intent to disengage Palestinian areas from one another and claim them for the official state of Israel. Israel is attempting to negotiate with Hamas in an effort to divide Gaza from other Palestinian areas.

But Palestinian cultural identity is strengthened in the struggle. In defiance of Hebrew being declared the official language of Israel, Arabs are declaring the year of Arabic language in schools. Arabic authorities will promote local bills and laws to display Arabic-only signs in Palestinian towns and villages.

Aida asked for solidarity from the international community. “I’m not calling for troops to come to Israel. I’m like you – women against militarization. But for sure I am calling for a political position by the international community of what is happening and what is going to be established. In my opinion this law is not only a colonial law but it is officially a declaration of the establishment of an apartheid regime in Israel.

Our struggle is going to segregate the democratic forces of the Palestinians and the Jews from the fascist right-wing forces whoever they are. It’s not going to be only a struggle on a national basis – it’s going to be a struggle that unites all people against fascists.”

Though Aida is returning home under threat of expulsion from the Knesset for speaking out at the UN and throughout the U.S., she said she is returning home energized by the support and solidarity she received, but cautioned that the news back home is of daily incidents of Arabs being threatened, attacked, and killed. And the settlement building continues. “We are in front of a long, terrible struggle…we still need you. It doesn’t end today.”

[1] For news coverage in Israel, see “Tens of Thousands Gather in Tel Aviv for Nation-State Law Protest Led by Arab Israelis.” Haaretz. August 11, 2018. TinyURL.com/ydh7w6fh. Palestinians and Jews are the majority of the two peoples living in Israel but a vocal Druz minority is also affected by the new law.

[2] The United Nations Security Council meeting of December 23, 2016, states: “Israel’s Settlements Have No Legal Validity, Constitute Flagrant Violation of International Law, Security Council Reaffirms. Adopting Resolution 2334 (2016) by 14 votes as United States Abstains. The Security Council reaffirmed this afternoon that Israel’s establishment of settlements in Palestinian territory occupied since 1967, including East Jerusalem, had no legal validity, constituting a flagrant violation under international law and a major obstacle to the vision of two states living side-by-side in peace and security, within internationally recognized borders. Adopting resolution 2334 (2016) by 14 votes, with the United States abstaining, the Council reiterated its demand that Israel immediately and completely cease all settlement activities in the occupied Palestinian territory, including East Jerusalem.” TinyURL.com/zsas7vd

Donate
By Rise Up TimesPublished On: January 2nd, 2019Comments Off on Solidarity Among People: A Response to the New Jewish National State Law