P.W. Singer and Emerson Brooking say social media has been manipulated to fuel popular uprisings and affect the course of military and political campaigns. Their new book is LikeWar. 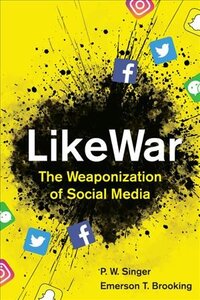 LikeWar:  The Weaponization Of Social Media

“Two defense experts explore the collision of war, politics, and social media, where the most important battles are now only a click away. Through the weaponization of social media, the internet is changing war and politics, just as war and politics are changing the internet. Terrorists livestream their attacks, “Twitter wars” produce real-world casualties, and viral misinformation alters not just the result of battles, but the very fate of nations. The result is that war, tech, and politics have blurred into a new kind of battlespace that plays out on our smartphones.

P. W. Singer and Emerson Brooking tackle the mind-bending questions that arise when war goes online and the online world goes to war. They explore how ISIS copies the Instagram tactics of Taylor Swift, a former World of Warcraft addict foils war crimes thousands of miles away, internet trolls shape elections, and China uses a smartphone app to police the thoughts of 1.4 billion citizens. What can be kept secret in a world of networks? Does social media expose the truth or bury it? And what role do ordinary people now play in international conflicts?

Delving into the web’s darkest corners, we meet the unexpected warriors of social media, such as the rapper turned jihadist PR czar and the Russian hipsters who wage unceasing infowars against the West. Finally, looking to the crucial years ahead, LikeWar outlines a radical new paradigm for understanding and defending against the unprecedented threats of our networked world.”

Donate
By Rise Up TimesPublished On: October 27th, 2018Comments Off on The ‘Weaponization’ of Social Media — And Its Real-World Consequences