“engaged in conduct intended to retaliate against specific news organizations and journalists whose content and viewpoints displease him. Through his actions, Trump has intentionally conveyed to all writers and journalists that …they may be subject to retaliation by the federal government. That conduct violates the Constitution.” 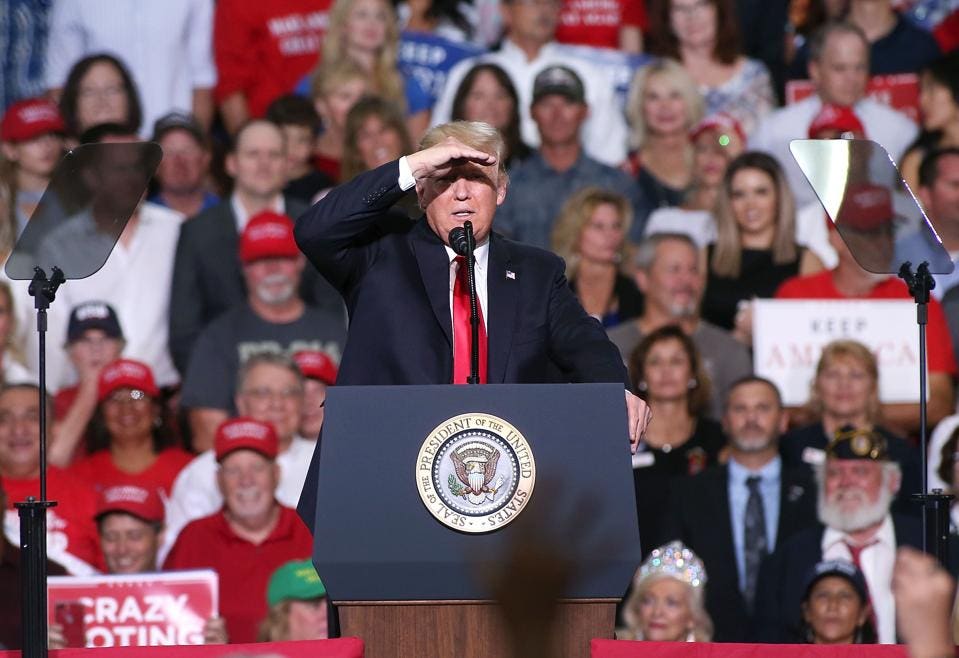 At a time when the entire world is aghast at President Trump’s delay in condemning the Saudi murder of a Washington Post journalist and horrified at his praise in Montana on Thursday of the unprovoked assault on a US journalist by congressman Greg Gianforte, a lawsuit has been filed alleging that president has been acting unconstitutionally in using powers of the federal government to intimidate and stifle the freedom of the press.

While accepting President Trump’s first amendment rights to “criticize his critics,’ the lawsuit filed on October 16 in the Southern District of New York by PEN America alleges that Trump’s actions

stifle exercise of the constitutional protections of free speech and a free press. Through retaliatory directives to officials in his Administration and credible public threats to use his government powers against news organizations and journalists… the President has violated the First Amendment and his oath to uphold the Constitution.

According to the lawsuit:

President Trump has directed his threats and retaliatory actions at specific outlets whose content and viewpoints he views as hostile. As a result, journalists who report on the President or his Administration reasonably believe they face a credible threat of government retaliation for carrying out the duties of their profession. President Trump has thus intentionally hung a sword of Damocles over the heads of countless writers, journalists, and media entities… His actions seek to accomplish indirectly what the President cannot do directly: impede professional and investigative journalism, and silence criticism.

an order (a) declaring that Defendant Trump’s retaliatory acts violate the First Amendment, and (b) enjoining Defendant Trump from directing any officer, employee, agency, or other agent or instrumentality of the United States government to take any action against any person or entity in retaliation for speech that the President or his Administration do not like.

The lawsuit is brought by the association of journalists, PEN America, which is represented in this case by the non-profit Protect Democracy and the Yale Law School Media Freedom and Information Access Clinic.

The current president of PEN America, Jennifer Egan, who won the Pulitzer for her novel, A Visit from the Goon Squad, said Trump’s “threats and punitive actions … imperil our free press – one of the cornerstones of a healthy democracy”.

Actions That Go Beyond Criticizing The Critics

The lawsuit is not based on the Trump’s obvious disdain for the press and the legal protections of the First Amendment. Trump has often described criticism of himself as “fake news” and has labeled journalists “the enemy of the American people,” a phrase used by authoritarian rulers to threaten their critics. While such attacks are “troubling and anti-democratic, [they] are not the basis of the lawsuit.” The lawsuit accepts that Trump’s criticism of his critics is protected by the First Amendment.

What the lawsuit alleges is that Trump has done more than criticize his critics. He has:

engaged in conduct intended to retaliate against specific news organizations and journalists whose content and viewpoints displease him. Through his actions, Trump has intentionally conveyed to all writers and journalists that …they may be subject to retaliation by the federal government. That conduct violates the Constitution.

Examples of Intimidation And Retaliation

The lawsuit alleges that President Trump has retaliated against Amazon.

Trump repeatedly called for action to punish the online retailer Amazon because Jeff Bezos, its chief shareholder and CEO, owns the Washington Post, whose accurate coverage of his Administration the President finds objectionable… The President then followed through on his threats and issued an executive order directing the U.S. Postal Service to review its financial practices, including the shipping rates it offers companies like Amazon… He then personally directed the U.S. Postmaster General to double the rate the Postal Service charges Amazon and other firms to ship packages. On October 11, 2018, the Postal Service announced proposed rate increases, including a proposed 12-percent increase for the Parcel Select service used by Amazon.

It alleges that Trump similarly retaliated against CNN because of its critical coverage.

When Trump first learned during the 2016 campaign that CNN’s parent company, Time Warner, planned to merge with AT&T, he publicly threatened to use the Justice Department’s antitrust merger-review process to retaliate against CNN for its news coverage. Following Defendant Trump’s election, the Justice Department sued to block the merger, despite a long track record of not opposing vertical mergers like the one proposed between Time Warner and AT&T.

The overall effect of Trump’s actions, according to the lawsuit, is to threaten and intimidate the press from exercising their constitutional duty to report on the actions of the president.

The lawsuit alleges that Trump’s actions infringe the freedom of speech and freedom of the press that are guaranteed by the Constitution. Together, these protections prohibit the government from attempting to restrict or otherwise improperly influence the news coverage of government activities through retaliatory acts and threats.

The lawsuit alleges that

Trump has violated these First Amendment rights through his acts that cause reasonable journalists to believe that there are instances in which government power will be used to retaliate against critical speech.

The Role of the Judiciary in Curbing Presidential Excesses

In other areas, the federal judiciary is also being called up on to curb alleged lawlessness on the part of the president.

In the matter of the prohibition of the emoluments under the Constitution, just last month a federal district judge in Washington held that a group of nearly 200 Democratic senators and representatives has legal standing to sue President Trump for violating the U.S. Constitution’s emoluments provision banning the acceptance of gifts from foreign interests.

In the nomination of Judge Kavanaugh to the Supreme Court, the Tenth Circuit has been asked by the Chief Justice himself to investigate judicial misconduct in terms of inappropriate partisan remarks and other matters in Kavanaugh’s testimony in the course of the Senate Judiciary Committee hearing.

In a world in which a Republican-controlled Congress is reluctant to hold President Trump accountable for any excesses, the Constitution is increasingly dependent on leadership by the federal judiciary for its protection.

The author is registered as a political independent.

From its inception, PEN America has been an organization of writers who come together in support of literature and in defense of free expression. Our charter, adopted in 1948, forcefully states: “PEN declares for a free press and opposes arbitrary censorship. It believes that the necessary advance of the world toward a more highly organized political and economic order renders free criticism of governments, administrations, and institutions imperative.”

Donate
By Rise Up TimesPublished On: October 22nd, 2018Comments Off on Federal Lawsuit Alleges Trump’s Threats Against The Press Are Unconstitutional, By Steve Denning