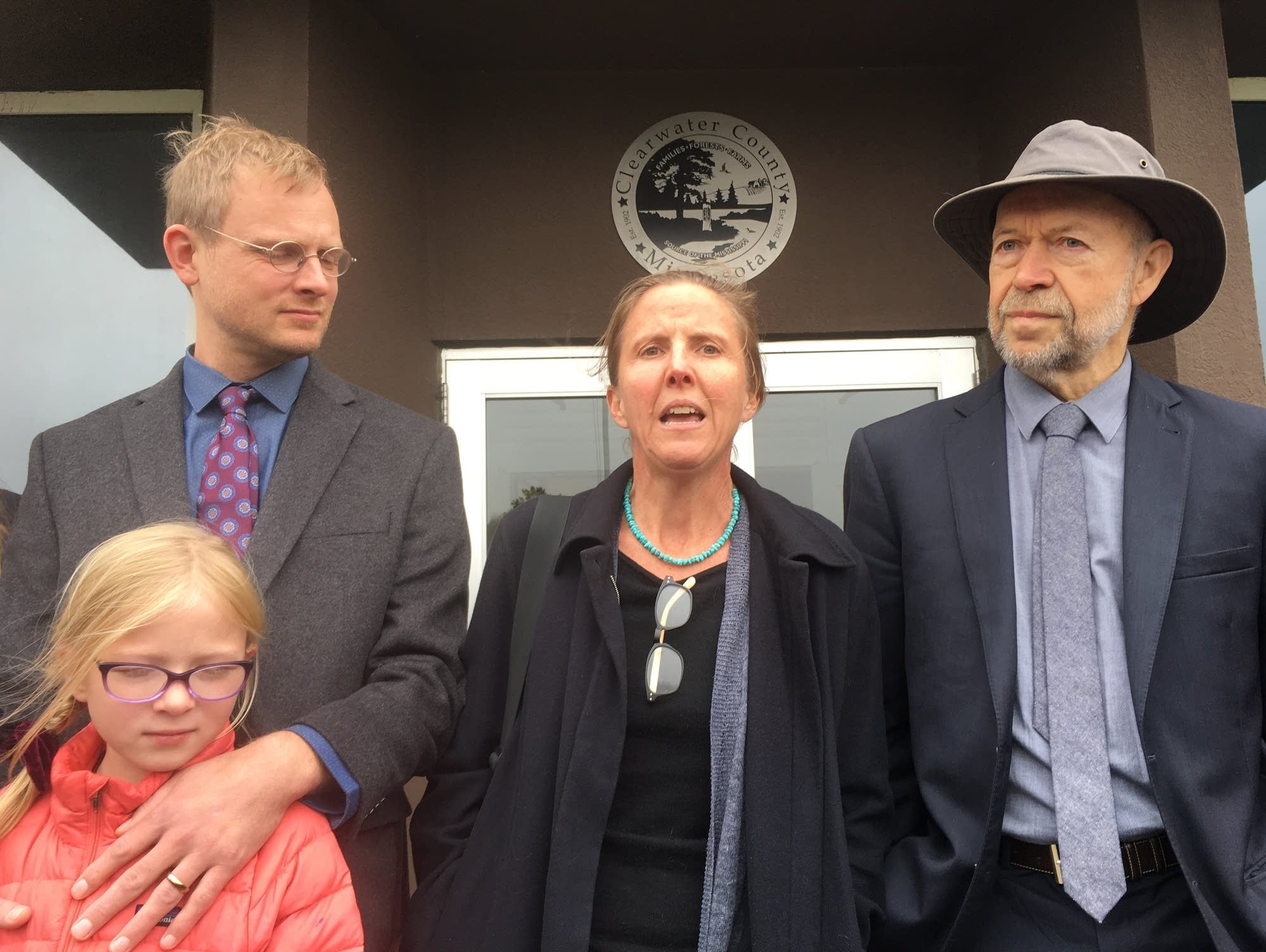 Defendant Emily Johnston (center) speaks outside Clearwater County courthouse, with co-defendant Ben Joldersma, left, and his daughter, and former NASA scientist James Hansen after she was acquitted along with two other defendants. Dan Kraker | MPR News

(Bagley, Minnesota)  The state of Minnesota failed to prove its property damage case because Emily Johnston, Annette Klapstein and Ben Joldersma did not damage a Canadian pipeline carrying oil into the United States. Tar sands oil is the dirtiest, most processed, most profitable of oils. Tars sands oil is the Harvey Weinstein of the oil industry.

On the morning of October 11, 2016, the trio paused the flow of foreign oil, most of which is destined for export abroad.

Two Enbridge oil transport pipes were turned off which the Canadian multinational company shut down for eight hours resulting in a delay of more than 500-million gallons of oil.The three “valve-turners” faced felony charges involving criminal damage to critical public service facilities and could have faced up to a year in jail.

The temporary shut-off was a symbolic act to link the burning of fossil fuels with climate chaos. Meanwhile Hurricane Michael walloped into Florida’s warming Gulf Coast like a bomb.

Bill Palmer, a supervisor for the Enbridge oil transport corporation, testified that simply shutting down the dirty tar sands flow would not damage company property. Bingo—there went the prosecutor’s case! In fact, Enbridge actually cut the flow just before the “valve turners” could because of a “safety call” Joldersma made to the company a few minutes before the shut off occurred.

Then the three climate activists waited an hour for Clearwater County Sheriff Darin Halverson to arrive in Leonard, about 210 northwest of Minneapolis, to arrest them. The defendants, all from the Seattle, Washington area, were part of a coordinated action to simultaneously turn off all five tar sands oil pipelines entering the U.S. via an extensive underground pipe system in Minnesota, North Dakota, Montana and Washington state.

The downside of the valve-turners acquittal is that the legal team could not put climate crisis on trial. On tap to give expert testimony were:

Struck from the list of potential expert witnesses were:

The tragedy of missing timely, factual information about the encroaching climate catastrophe is that we miss the opportunity to stop, if not to reverse, the damage to our nation, the world, our children, the future.

The 12 jurors and two alternates were sequestered during the defense motion to dismiss but they must have heard us whooping when the trial abruptly ended. One elderly woman juror apparently missed the point that Enbridge, not the valve-turners, shut down the flow and that shutting the valve was not property damage.

She spoke with valve-turner supporters after the dismissal mentioning how dangerous it was to have people messing around with pipes that could cause an explosion. She did not mention the numerous Enbridge tar sands spills from pipeline ruptures and oil train disasters.

The day the trial started, October 6, was Indigenous Peoples’ Day and also the day the IPCC (Intergovernmental Panel on Climate Change) issued its latest dire warning: we have between two and 12-years to stop polluting the atmosphere with carbon dioxide. 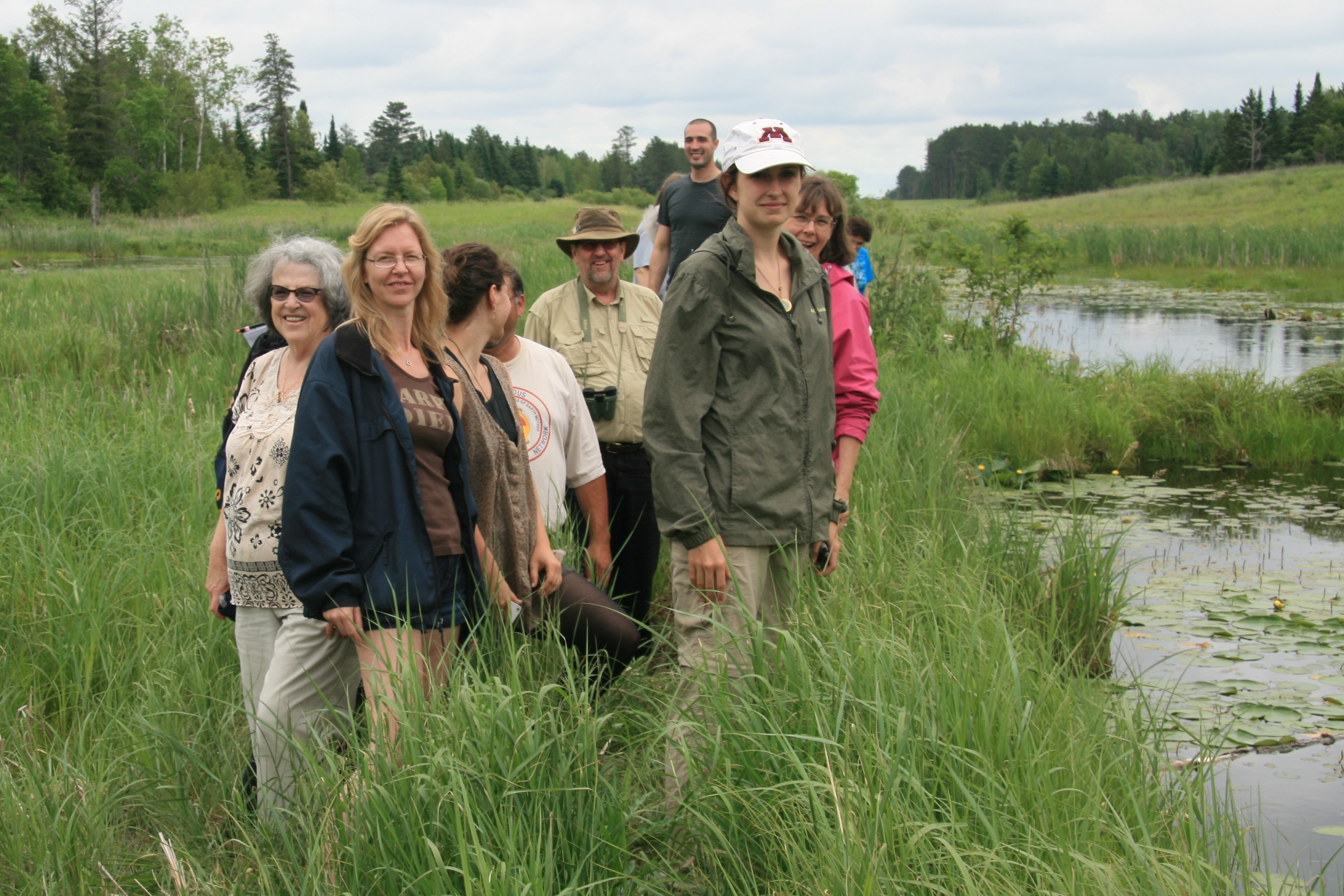 Eco-tourists tracking a pipeline surfacing in a wetland. From North Dakota to Wisconsin, a wide swath of trees was removed across Minnesota for Canadian Enbridge oil pipelines.

It Takes a Village

In the two years from October 11, 2016 to October 10, 2018 the Minnesota valve-turner team waited and planned a “defense of necessity.” Turning off the tar sands flow was considered less damaging than allowing continued, accelerating climate chaos.

The necessity premise is extrapolated from the concept that breaking into a burning house to save a life is an ethically higher priority than following an inflexible trespass law.

Unlike North Dakota, Montana and Washington state, Minnesota defendants have the right to explain to a jury why they did the deed. A 1984 state Supreme Court decision followed more than 2,200 nonviolent, civil disobedience arrests at Honeywell Corporate Headquarters in Minneapolis, protesting indiscriminate, anti-humane war products for profit.

Although the foreign-owned Enbridge Corporation appealed and re-appealed the defendants’ rights decision, it held. Thus the extensive experts list that was attacked as a “courtroom circus” even after the trial began. So it was a relief to Clearwater County District Judge Robert Tiffany to dismiss the case four weeks before midterm elections.

Lead attorney Lauren Regan, Executive Director of the Civil Liberties Defense Center in Eugene, Oregon, was “surprised” when the judge granted the motion to dismiss. She was also “disappointed” since the legal team was ready with “a dream necessity defense.”

Although it is a common practice at the beginning of the defendants’ side of a trial to ask for acquittal, Regan said the judge ruled solely on the law. The single remaining charge was damage to property and sworn testimony revealed no damage.

“I’m very relieved the State of Minnesota acknowledged that we did no damage and intended to do no damage,” Emily Johnston said. “I also admit that I am disappointed that we did not get to put on the trial that we hoped for.”

Clearwater County is literally oil-opolis with American Koch Brothers and Canadian Enbridge oil facilities facing each other across a county highway in Clearbrook, supplying jobs and tax revenues. These “tank farms” include huge round oil containment structures with expandable floating roofs holding up to 500,000 gallons of different kinds of oil. It would be a tempting site for oil infrastructure terrorism.

As Sister of St. Joseph Jane McDonald observes, “The wrong people are on trial.”

Donate
By Rise Up TimesPublished On: October 14th, 2018Comments Off on Tar Sands Oil vs. Climate Change, by Susu Jeffrey