Whenever you see the sudden emergence of an attractive media campaign that is sympathetic to the plight of civilians in a resource-rich nation unaligned with the western empire, you are seeing propaganda.

Well, you may want to sit down for this shocker, but it turns out that they happen to be women from a nation that the US war machine is currently escalating operations against. They are Iranian.

Whenever you see the sudden emergence of an attractive media campaign that is sympathetic to the plight of civilians in a resource-rich nation unaligned with the western empire, you are seeing propaganda. When that nation is surrounded by other nations with similar human rights transgressions and yet those transgressions are ignored by that same media campaign, you are most certainly seeing propaganda. When that nation just so happens to already be the target of starvation sanctions and escalated covert CIA ops, you can bet the farm that you are seeing propaganda.

Back in December a memo was leaked from inside the Trump administration showing how then-Secretary of State, DC neophyte Rex Tillerson, was coached on how the US empire uses human rights as a pretense on which to attack and undermine noncompliant governments. Politico reports:

The May 17 memo reads like a crash course for a businessman-turned-diplomat, and its conclusion offers a starkly realist vision: that the U.S. should use human rights as a club against its adversaries, like Iran, China and North Korea, while giving a pass to repressive allies like the Philippines, Egypt and Saudi Arabia.

“Allies should be treated differently — and better — than adversaries. Otherwise, we end up with more adversaries, and fewer allies,” argued the memo, written by Tillerson’s influential policy aide, Brian Hook.

The propaganda machine doesn’t operate any differently from the State Department, since they serve the same establishment. US ally Saudi Arabia is celebrated by the mass media for “liberal reform” in allowing women to drive despite hard evidence that those “reforms” are barely surface-level cosmetics to present a pretty face to the western world, but Iranian women, who have been able to drive for years, are painted as uniquely oppressed. Iran is condemned by establishment war whores for the flaws in its democratic process, while Saudi Arabia, an actual monarchy, goes completely unscrutinized.

This is because the US-centralized power establishment, which has never at any point in its history cared about human rights, plans on effecting regime change in Iran by any means necessary. Should those means necessitate a potentially controversial degree of direct military engagement, the empire needs to make sure it retains control of the narrative. 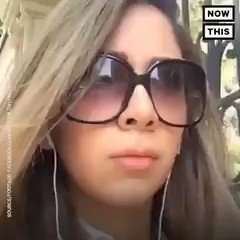 Women in Iran are recording the abuse they suffer at the hands of men for not wearing religious clothing. May the good people of Iran free themselves from the shackles of the tyrannical mullah theocracy.

This is what war propaganda looks like in the era of social media. It will never look ugly. It will never directly show you its real intentions. If it did, it wouldn’t work. It can’t just come right out and say “Hey we need to do horrible, evil things to the people in this country on the other side of the world in your name using your resources, please play along without making a fuss.” It will necessarily look fresh and fun and rebellious. It will look appealing. It will look sexy.

And it’s working. I am currently getting tagged in these videos multiple times a day by Trump supporters who are eager to show me proof that I’m on the wrong side of the Iran issue; the psyop is so well-lubricated with a combination of sleek presentation and confirmation bias that it slides right past their skepticism and becomes accepted as fact, even the one with the Now This pussyhat propaganda logo in the corner.

Be less trusting of these monsters, please. The people of Afghanistan haven’t benefitted from the interminable military quagmire that has cost tens of thousands of their lives. The invaders of Iraq were never “greeted as liberators” by an oppressed population. The humanitarian intervention in Libya left a humanitarian catastrophe in its wake far more horrific than anything it claimed to be trying to prevent. Saving the children of Syria with western interventionism has left half a million Syrians dead.

If the Iranians do in fact wish to change their government, it should happen without crippling sanctions, collaboration with extremist terror cults, or the rapey tentacles of the CIA manipulating the situation. There has never been a US-led regime change in the Middle East that wasn’t disastrous. People should be screaming at the US and its allies to cease these interventions, not applauding propaganda that is clearly being manufactured by that same empire.

The views expressed in this article are the author’s own and do not reflect Anti-Media editorial policy.

The contents of Rise Up Times do not necessarily reflect the views of the editor. This article was chosen for republication based on the interest of our readers. Rise Up Times often republishes stories from a number of other independent news sources.

Donate
By Rise Up TimesPublished On: July 16th, 2018Comments Off on This Is What War Propaganda Looks Like in the Age of Social Media, by  Caitlin Johnstone