Editor’s comment: Is not the role of the mainstream corporate media to promote the strategy of keeping the American public in constant fear?  And in a constant defensive mode as we react to Trump’s many violations of international law and the Constitution, not to mention violation of simple human rights including protection of the commons? 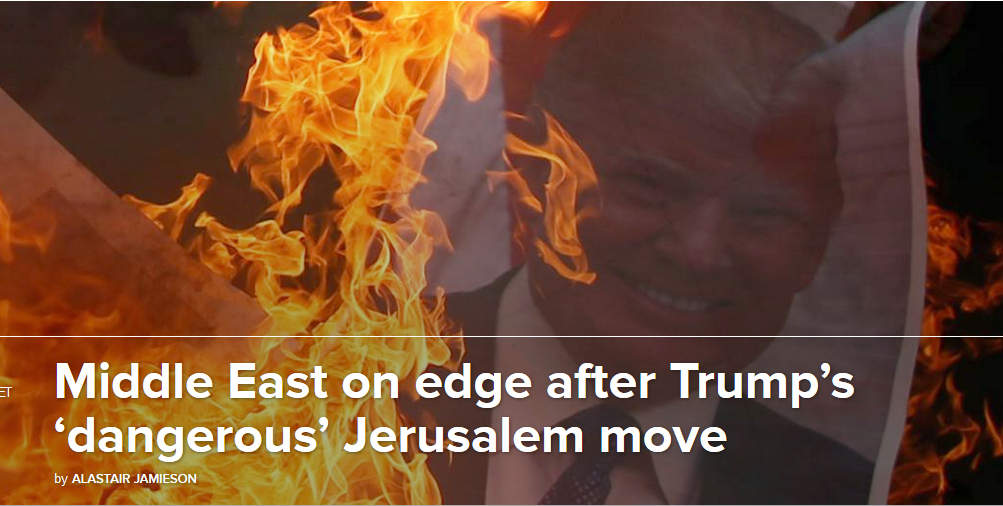 President Donald Trump declared that the US saw Jerusalem as the capital of Israel and announced the US would move its Israeli embassy there—reversing decades of policy and removing any pretense of US neutrality in negotiating “peace” between Palestinians and Israelis. 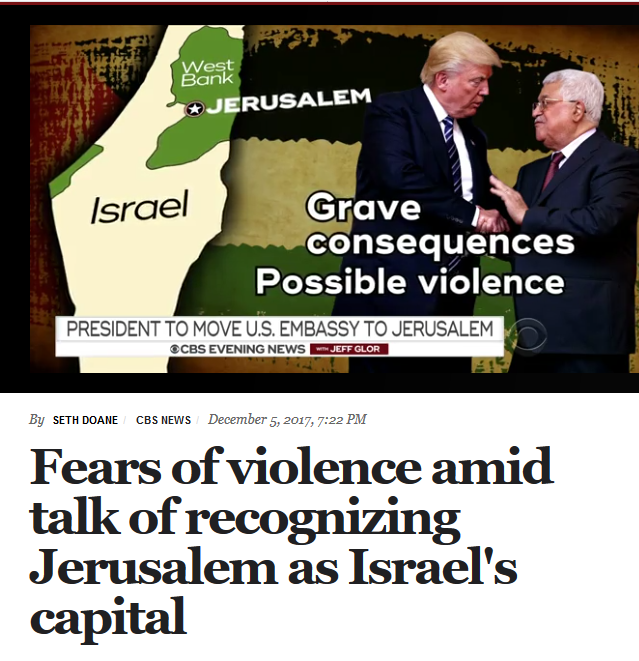 CBS News (12/5/17), like other outlets, stressed the threat of violence over the illegality of occupation.

Though both  Congress and past presidents of both parties have supported the move in principle for decades, much of the US media establishment is now fretting about the Jerusalem announcement, continuing to push the illusion that a nebulous “peace deal” is still right around the next watchtower.

The American “recognition” of Jerusalem as Israel’s capital further entrenches and condones Israel’s occupation, ethnic cleansing and colonization of Palestinian land. But outlets like the New York Times, Washington Post and CBS, in editorials and straight reporting, downplayed and skirted matters of substance, reserving critical attention for questions of optics or process.

Thus the frame that dominated headlines as news of Trump’s announcement broke was not on the meaning of the move, but on potential reaction to it, specifically vague “fears of violence” from Palestinians and Muslims throughout the Middle East:

Editorials in the Washington Post (“possibly trigger violence, including against Americans”—12/6/17) and the New York Times (“perhaps inciting violence”—12/5/17) used similar language. Neither opposed Trump’s recognition of Jerusalem or Israel’s brutal, illegal occupation of East Jerusalem as such. Both had lots of Concerns™ and leveled minor critiques on process grounds (the most popular being that the move could “harm” peace efforts), but neither of the two leading papers in the United States could bring themselves to condemn Trump for his radical departure from US policy and international law in and of itself.

This is often the case when it comes to Israel/Palestine: Media focus is on the reaction to injustice, not on the injustice itself. The illegality of Israel’s occupation of East Jerusalem is rarely mentioned. Nor is the fact that the United States is now virtually alone out of the 195 countries on Earth in recognizing Jerusalem as Israel’s capital, or that the city has been, and is still, designated by the United Nations as a corpus separatum since 1947; that is, a separate territory under international jurisdiction. (The Economist—12/7/17—was one of the few who did point this out.)

Likewise ignored are the UN Security Council’s repeatedcondemnations of Israel’s 1967 annexation of East Jerusalem and its 1980 declaration of the city as its capital, on the grounds that “acquisition of territory by military conquest is inadmissible.”

The broader context of the 60-year military occupation is likewise out of the picture, along with the dozens of international laws Israel breaks on a daily basis. Many of these relate directly to Jerusalem, including the expulsion of residents from the occupied territory of East Jerusalem and the transfer of hundreds of thousands of colonists there since 1967.

The primary focus is, instead, the possibility of “fresh violence in the region,” which evokes tropes of mindless Arab rage and barbarity. As Marya Hannun explained over at Slate (12/6/17), when we center “angry Arab” cliches, we perpetuate the notion that violence is the alpha and omega of resistance:

There is also a more insidious message being sent by warnings about the potential for a “third intifada” in response to President Trump’s recognition of Jerusalem, one that has long haunted, not just the conflict over Palestine and Israel, but also other instances where human rights, civil rights and sovereignty are violated. When we focus on violence as the only preventive force against unjust policies, we reinforce the notion that violence is the only effective means of resistance. Perhaps more often than not, these assessments prove to be accurate, but it’s a dangerous game, and only aids those who see no point in working toward peace at all.

By leading with warnings of a “Middle East on edge” (NBC News, 12/7/17), where “Palestinians Vent Their Anger” (New York Times, 12/7/17) and “clashes escalate” (Washington Post, 12/7/17; BBC, 12/7/17), the media double down on dangerous stereotypes, marginalize legitimate frustration and resistance, and obfuscate history in favor of the ever-convenient, shoulder-shrugging, “they’ll just never get along” narrative.

No mention of redoubling of efforts of the growing Boycott, Divestment and Sanctions (BDS) movement, or other civil-society efforts to resist Israel aggression. No mention of calls for solidarity by Palestinian activists. A singular focus on violence (albeit violence that, it should be noted, is sanctioned by international law) reduces Palestinians to cartoon hotheads rather than a deeply disenfranchised population suffering decades of displacement, discrimination and occupation, while the most powerful country on the planet condones, funds and arms their continued dehumanization.

← Russia or Corporate Tax Cuts: Which Would Comcast Rather MSNBC Cover?
Whither the Anti-war Movement? →