More than 100 groups marched in multiple May Day events in Los Angeles. Tens of thousands flowed into downtown in support of immigration, workers’ rights, other social causes, and, in general, to express opposition to Trump. 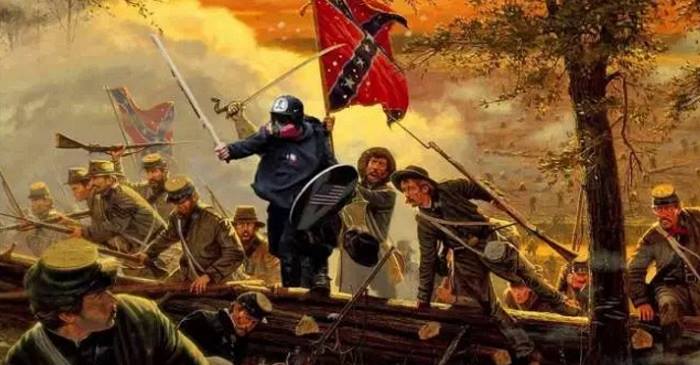 A Donald Trump-focused Youtube channel falsely reported that May Day is a “massive Antifa protest.” May Day is actually international workers day, and in Los Angeles, it has been a day to march in support of immigrants’ rights. The past three May Days have gone smoothly and were fairly benign events. This year, however, some Trump supporters made a Facebook event asking people to come protest. The Trump group met up at a federal building in downtown Los Angeles and then made its way to LAPD headquarters, which is located directly across the street from where three of the May Day gatherings were planned. 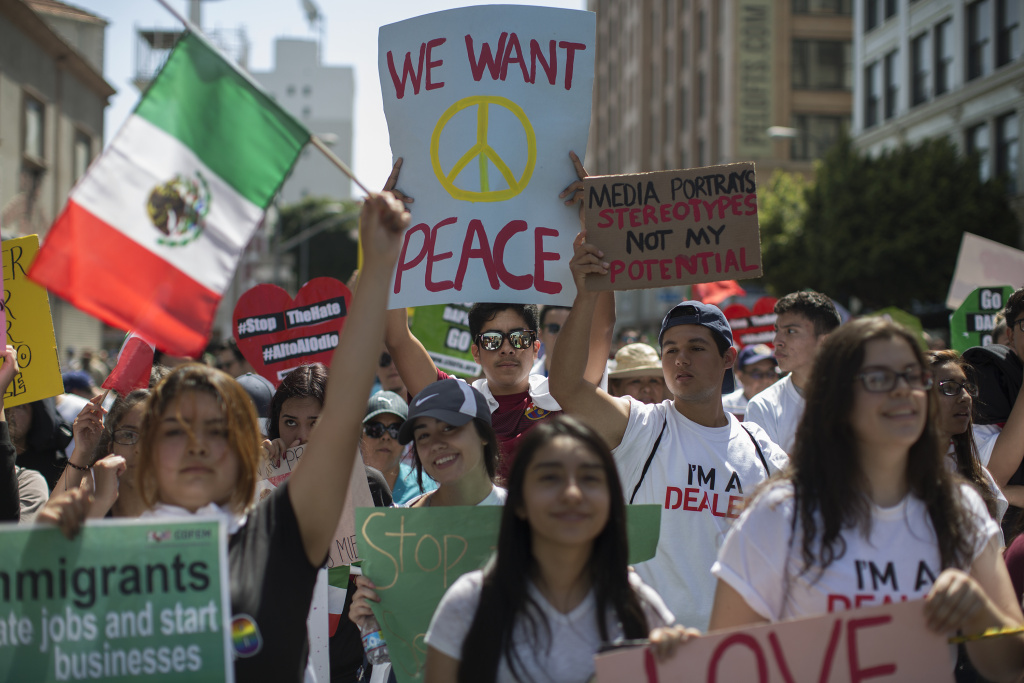 Photo: KPCC
More than 100 groups marched in multiple May Day events in Los Angeles. Tens of thousands flowed into downtown in support of immigration, workers’ rights, other social causes, and, in general, to express opposition to Trump.
In recent months, Trump supporters have been showing up to random politically left activist events and protests. Up until now, the Trump groups in Los Angeles have been relatively small, with about six to ten people attending such counter-protests.
In a social climate where there have been numerous clashes between alt-right and other politically right-leaning and Antifa groups, the whole idea of Trump supporters crashing Mayday was, in itself, provocative. Just days before May Day, there were protests at Berkeley, where Ann Coulter’s speech had been canceled. In an interview, a person who calls himself Baked Alaska told a well know live stream journalist, Tim Pool that he had come on a bus with people to Berkeley to see the speech. Some of the right-wing protesters who went to Berkeley that day were wearing helmets and goggles in anticipation of clashes with Antifa. Some of the same people who were in Berkeley came to Los Angeles on Monday.
“They [people in the Trump group] are using the signs as shields,” Pool said.

Trump supporters showed up to LAPD headquarters on Monday wearing helmets. Some of the Trump people clearly spoke of wanting to “kick some Antifa ass.”  While at the event, I saw one familiar looking man holding a stick. I recognized him from a video of violence between Antifa and Trump supporters in Berkeley. He was in the now infamous video of the man who punched a woman. The man I saw in L.A. holding a stick is the older, thin, black man in the video below between the :22 seconds and :26 seconds mark.
https://youtu.be/Qmft1H0ZFHw
There was a report that one of the May Day attendees threw rocks at Trump supporters and was arrested. However, I personally saw the Los Angeles Police Department (LAPD) declare a riot in 2012 because one person threw a bottle, and in 2014, the same thing occurred just because LAPD wanted the protest to end. It’s interesting that Los Angeles police chose a different strategy Monday when all the mainstream media news vans were already there covering the events of the day. In other cities, like Santa Ana and Berkeley, police have been conveniently absent when they have reason to believe clashes between Antifa and alt-right, KKK, or other right wing groups are likely to occur. I’ve arrived at multiple other protests early to find that riot cops are staged a couple blocks away, ready to swoop in at the slightest provocation. Photo:  KCET
One person was arrested for burning an American flag at the Monday protest, though there were no arrests for the burning of a large Trump sign two blocks away from the large crowds. A police officer calmly walked up and simply stomped out the flames, and then another cop took the sign as “Fuck Tha Police” played in the background. The restraint on the part of LAPD on Monday was unusual. However, there was so much media coverage — with at least one news helicopter already in the air streaming live from above — for everyone to see what was actually happening.
Different people spoke on a megaphone at the Trump counter-rally. Most of the words spoken sounded as if the Trump people were trying to troll the May Day crowd. A woman said, “I’m a Latina for Trump.” The pro-immigration crowd booed her. One person on the Trump megaphone was calling the May Day crowd losers, saying they lost the election and mentioning the civil war while claiming slavery was a good thing. No one in the Trump crowd stopped the man praising slavery from speaking, and no one got on the megaphone to speak about why Trump is good or how his policies will improve America.
After the Trump rally was over, the remaining group of Trump supporters started walking down the sidewalk with an escort of LAPD cops on motorcycles, and then cops on foot and on bicycles escorted the group. Almost immediately, the people Tim Pool is calling Antifa — people dressed in black who were “blocked up” and wearing hoodies and bandanas or other clothing to protect their identities — followed the Trump group. I was not aware of any plan to do so, and it felt spontaneous when it happened. People just got up and followed the Trump crowd.
As they walked down the sidewalk, a Trump supporter on a megaphone said, “We do things legally. Obey the laws. Come here legally.” A feminine voice on the other side of the street yelled back, “You didn’t come here legally, either.” A white woman said, “None of my ancestors asked permission to come here, none of them, even my grandma.” A man on the Trump side said, “They’re trying to create violence.” Banter back and forth across the street continued as threats of violence came from both sides. “The Antifa guys are following us. This is how they get intimidating,” one person said. A woman on the Trump side who was wearing white shorts and some sort of helmet said, “I will fight with them. I will fuck them up.”
Tim Pool reported that the Antifa group made the Trump group move in a specific direction. I found that to be funny because some of the people wearing black wanted to push the Trump group into Skid Row, which was one or two more blocks away. That did not happen.
Referring to the people he calls Antifa, Tim Pool said, “They don’t care about the press. They don’t care about freedom of information so they just yell at me.” But I don’t think those are their concerns. Rather, I think some people don’t want to be filmed, and they know Pool will not respect that. I was there live streaming, and no one cared because I gave people the respect of not putting a camera in their face since I understand they probably don’t want that. Pool also said, “Unless you attack Trump supporters, you are one, which is insane but what are you gonna do, ya know.” I agree that this logic is insane, and I don’t think many people actually think that. I came along to film the police. I’ve never attacked a Trump supporter. No one thinks that for that reason I support Trump.
Some of the people with the Trump group had interesting pseudonyms, like Johnny Cadillac, Brittany Pettibone, Red Elephants, Based Stickman, and Baked Alaska.
A Trump supporter who was wearing a cardboard mask was ambushed and physically assaulted by another event attendee. He was interviewed by Pool at 4:00 in the linked video, and Mike Tokes, a popular Twitter personality and Trump supporter, interviewed him at 10:20 in this video. “They’re [Antifa] a terrorist organization,” Tokes says, though he seems misinformed. There is no Antifa organization in Los Angeles. At 12:07 in the Tokes video, a man in a red, white and blue helmet asks the Trump crowd if anyone can hold his dog “So I can hit them.” At 17:40 in the Tokes video, a person called Sindey said she was also in Berkeley recently.
“This group of people [the pro-Trump group] is not being aggressive in the least bit, and the people on the left, all they do is play into the PR for these people,” Pool said. This is a flat out lie. All along the walk, people on the Trump side of the street yelled threats of ass-kicking to the side where I was walking. Some people on both sides of the street wanted a fight, and the man with the stick held it up to let people know he was ready to use it.
Tim Pool said that some of the Antifa protesters had threatened him with violence on Monday, and this is true — some people did want to ‘kick his ass.’ He explained some of his perspective:

“This group [the people dressed in black bloc] is what I call alt-left. There’s a lot of people who say alt-left is something different. No, I don’t care. Look, moderate liberals, they believe in free speech, they don’t believe in violence. It is this alternative group, I don’t care how big they are. They are not moderate liberal, they are not the mainstream. These people are alternative. They attack people. They attack journalists.”

It’s more respectful to address people the way they choose to be addressed, but Pool was telling people that those wearing all black think what he thinks they think. Wouldn’t a journalist report on what people actually say and not his opinion on their beliefs? If people have a problem with Tim Pool, this lack of respect is one small example out of many reasons they may object to him.
The LAPD got on a loudspeaker and ordered the Trump people to “continue into Joe’s parking lot,” cautioning them that “This is as far as we will escort you.” The Trump people left and then some young people burned a Trump sign.
Follow @PMbeers on Twitter.
Opinion / Creative Commons / Anti-Media / Report a typo

Donate
By Rise Up TimesPublished On: May 6th, 20171 Comment