Bershidsky, for some odd reason, thinks these protests are about convincing Trump in some interpersonal manner. They’re actually about demonstrating mass disapproval of the pending regime and its stated goals, not appealing to Trump’s better angels.

After Donald Trump’s surprise victory last week, protests against his pending presidency—and against the racism, misogyny and xenophobia he embodies—popped up from New York City to Portland to Kansas City to Austin to Nashville. Thousands of protesters gathered under the banner of #NotMyPresident, expressly rejecting the Trump administration’s agenda of, among other things, forced deportations, Muslim bans and attacks on women’s reproductive rights.

On cue, several center and center-left pundits jumped in to call into question and concern-troll this exercise of dissent and its sometimes “violent” excesses of property damage. If more anti-Trump people in Oregon had voted, like the New York Daily News (11/15/16) wanted them to, it might have increased Hillary Clinton’s margin of victory in the state beyond the 11 percentage points she actually won by. But it wouldn’t have affected the outcome of the national election.

Take the meme-ready story that emerged out of Portland claiming that most anti-Trump protesters arrested during last week’s unrest didn’t vote in the presidential election (NBC Portland, 11/15/16). This was pounced on by several Twitter personalities and media outlets of the alt-center—the aggressively pro-centrist vanguard who rush to exploit every misstep of leftist activism—and used as evidence of hypocrisy among those taking to the streets:

The underlying logic of the gotcha-bait being: If you don’t vote, you forfeit your right to any form of dissent for four years.

These write-ups didn’t acknowledge the fact that had every protester in Portland voted for Hillary Clinton, it wouldn’t have affected the outcome of the election one bit, given Oregon’s status as a safely blue state. (You’d have to drive 350 miles from Portland to find the nearest electoral vote that wasn’t virtually guaranteed to go for Clinton.) No matter, dirty anarchists were in our streets causing problems and had to be publicly shamed—up to and including mugshots being plastered all over the news.

Liberal gatekeeper Samantha Bee took to her show (Full Frontal, 11/14/16) to do a little left-punching, drawing the distinction between the proverbial “peaceful” and non-peaceful protestors. For over a year, pro-Democratic pundits have justifiably warned us Trump was a Hitler or Mussolini-like figure. In the face of this looming threat, protests will predictably result in some property damage and arrests. Those wanting to remain in good standing with the establishment will show their reasonable status by jumping in to “condemn” the excesses of protests:

First thing to note is that Bee distinguishes between protesters and “Middle America.” With mass demonstrations in Nashville, Iowa City and Denver, one is compelled to ask, where is this “Middle America,” exactly?

In this moral universe, peaceful or good protesters shake hands with police officers and protest in a subservient, state-sanctioned fashion. Anyone with a passing knowledge of how protest works knows this is about as useful as a strongly worded letter to a congressperson in terms of putting pressure on the state, but the alt-center has above all one goal: the maintenance of social order. Protest, by all means, but not in a way that disrupts the normal course of society. 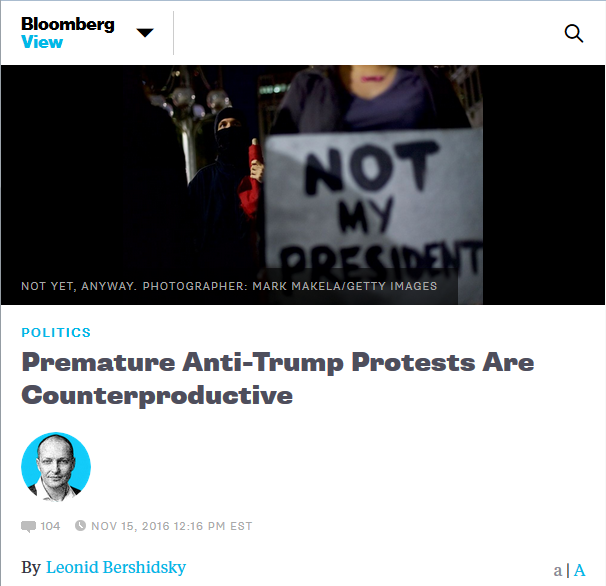 Bloomberg‘s Leonid Bershidsky (11/15/16): “The liberal cause would be better served if the demonstrators stayed home.”

Leonid Bershidsky at Bloomberg (11/15/16) added some more concern trolling, saying he supports protests in theory, but they weren’t making any specific demands:

I believe the liberal cause would be better served if the demonstrators stayed home….

The protesters also are telling Trump that, whatever he does, they don’t consider him their president. They reject him in advance.

That’s hardly a message designed to extract a constructive response. Trump has already said he’s going to try to be a president for everyone—but he knows many don’t believe him.

Bershidsky, for some odd reason, thinks these protests are about convincing Trump in some interpersonal manner. They’re actually about demonstrating mass disapproval of the pending regime and its stated goals, not appealing to Trump’s better angels.

The Bloomberg columnist went on:

Wouldn’t it make more sense, however, to begin protesting when—or, rather, if—Trump actually proposes some action that smacks of bigotry? For example, if he actually attempts to make good on his promises to build a new border wall or to ban Muslims from entering the US.

What Bershidsky theory of power is is anybody’s guess, but he’s wrong on the facts. Trump already is mapping out several of his most dangerous campaign promises, from deporting millions of immigrants, to “the wall,” to the creation of a Muslim registry. Bershidsky expects those most threatened by Trump’s clearly stated goals to display outrage… once they’re underway? 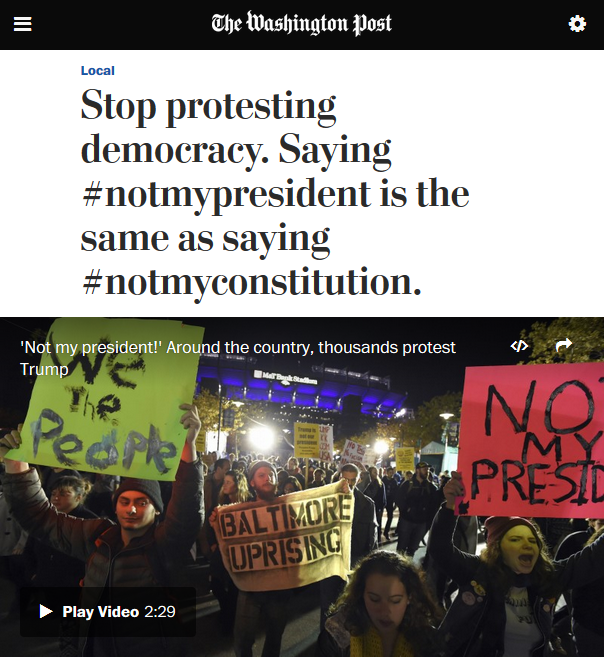 Worst of the alt-center attacks on the protests was Washington Post columnist Petula Dvorak who, in “Stop Protesting Democracy. Saying #NotMyPresident Is the Same as Saying #NotMyConstitution” (11/14/16), took false equivalency to heretofore unseen levels of vulgarity. She began:

What was lost in the election last week?

Decency. Humanity. Morality. All the way around.

From protesters destroying property in Portland, Ore., to racists destroying a sense of safety in Silver Spring, Md., too many people are undermining the foundation of our country in the aftermath of a polarizing election. And our first order of business is to fix it. Because this is about democracy, really.

Setting aside the adolescent writing (Gratuitous. Periods. Make. Platitudes. Seem. Important.), Dvorak is, quite shockingly, equating dumpster fires in Portland with spraypainting  “Trump Nation. Whites Only”  on a Spanish-language church in Maryland. From the outset, we have two “extremes”: those protesting–and occasionally causing property damage–in the face of emboldened fascists, and the fascists themselves. To the alt-center, these two poles are moral equals, two sides of the same ideological coin, and must be condemned in equal terms:

I want to say that the only difference between the two is that one is ridiculous while the other is dangerous. But that’s not totally true, either…. Protesting the simple fact of our democratic process is dangerous, too.

Dvorak is unsure of her own facile point. She hedges a 1:1 equation, but then steps back from that. What Dvorak fails to understand is that the protestors aren’t protesting “democracy” as such, they’re protesting the pending presidency of a man who is stocking his White House with white nationalists, Islamophobes and gay-baiters—not to mention people with a notorious hostility toward democracy itself. They’re protesting someone who has pledged—and to a large extent already begun planning—the deportation of millions. In the face of this crisis, many have chosen to take to the street to send a message his agenda will not be acquiesced to without resistance, both legal and extralegal.

The protests against the pending Trump administration and the forces he emboldens are likely to go on until his inauguration in January and beyond. During this time, these protests, like all before, will have instances of property damage and clashes with police, and each time, the alt-center will be there to highlight and hand-wring over those excesses in pursuit of civility and order.

Donate
By Rise Up TimesPublished On: November 18th, 20163 Comments