How Obama went from reluctant warrior to drone champion When it comes to questions of war and peace, it often seems as if there are two Barack Obamas.

There’s the president who has anguished, often publicly, over the morality of killing and the costs of combat. “No matter how justified, war promises human tragedy,” Obama said just days after his 2009 decision to send 30,000 U.S. troops to Afghanistan.

Then there’s the president who, over the last seven years, has sanctioned the largest targeted killing campaign in American history. “There isn’t a president who’s taken more terrorists off the field than me,” he said earlier this spring. A few weeks later, he backed up the boast at the U.S. Air Force Academy, reading off the names of seven al-Qaeda and Islamic State leaders killed on his watch.

The White House’s report on its drone program and a separate executive order released Friday show how Obama has sought to untangle these contradictions. For Obama, the low number of civilian deaths detailed in the report — fewer than 116 in seven years of strikes — amounts to a vindication of the drone program’s effectiveness as a counterterrorism tool. The report, however, does reflect an increasingly unshakable conviction in the White House that the drone strikes have helped safeguard American lives and shift the country off an all-consuming war footing.

“This is a tool that this administration and this president has used frequently in a way that has had a devastating impact on the ability of terrorists to establish a safe haven and use the safety of that safe haven to plot against the us and our interests,” said White House press secretary Josh Earnest. “This is a powerful tool.”

The report on casualties and the executive order are designed to ensure that the drone program continues after Obama leaves office.

Since the first days of his presidency, Obama has been uneasy with large-scale deployments of U.S. troops. He has questioned the claims of his generals who promised that with enough troops and time they could not only defeat militants but also heal fractured societies such as Iraq and Afghanistan. And he has fretted about the costs of such deployments in American lives and worried about the destruction that such troops inevitably wreak overseas on civilians.

Drones seemed to offer Obama a better, cleaner and less destructive way of waging war. During Obama’s time in the White House, unmanned aircraft have grown increasingly more sophisticated. They can stay over their targets longer, collect more intelligence and carry bigger payloads than the unmanned planes that were flying when Obama was first elected.

In speeches in 2013 and 2016, President Obama stressed that the U.S. tries to avoid civilian deaths as a result of drone strikes – but doesn’t always succeed. (The Washington Post)

In 2013, Obama announced new rules to govern the use of this deadly new technology. Obama’s goal was to transition the United States to a new, more discriminating and humane form of warfare in which no strikes would be carried out unless there was a “near certainty” that civilians would not be injured or killed.

The White House reiterated that standard Friday and said its “rigorous standards and procedures” have “resulted in extraordinarily precise targeting.”

Even before Friday’s report, Obama had been forced to acknowledge a growing number of mistakes, including the deaths of two Western hostages — Warren Weinstein, an American, and Giovanni Lo Porto, an Italian — in a strike on an al-Qaeda compound in Pakistan last year.

“It is a cruel and bitter truth that in the fog of war generally and in our fight against terrorists specifically, mistakes — sometimes deadly mistakes — can occur,” Obama said after those deaths. “I profoundly regret what happened.”

Did the CIA miss an opportunity to identify Warren Weinstein?]

Earlier this year, in response to a University of Chicago law student who questioned the legality and morality of the drone program, Obama talked about the inevitability of errors and civilian deaths. “We anguish over this in a very serious way,” he said.

The deaths, though, do not appear to have shaken Obama’s faith in drones as a more cost-effective, humane alternative to large-scale ground invasions.

Inside the White House, the war on terror is largely viewed as a zero-sum game. The more energy and resources that U.S. government spends fighting al-Qaeda and the Islamic State, the thinking goes, the less time it has to focus on other critical issues such as the nuclear deal with Iran, diplomatic outreach to Cuba or climate change.

Drones have helped make this shift possible. They have allowed Obama to position himself as something other than a wartime president, aides said.

“I don’t think Obama sees himself as a war leader,” said Derek Chollet, a former senior Obama administration official and author of “The Long Game,” a book on the president’s foreign policy. “He sees military power as absolutely essential but believes we have other interests at stake.”

Obama’s conservative critics say this low-cost, light-footprint approach has allowed the Islamic State to take root in the Middle East and to spread to places such as Libya.

His liberal critics complain that the drone-focused approach shortchanges America’s moral responsibilities as the world’s sole superpower to prevent human suffering and genocide in places such as Yemen, Iraq and Syria.

A big question for the next president is whether to continue the Obama administration’s aggressive policy of targeted killing. Today the Obama administration is flying armed drones in seven countries: Iraq, Syria, Libya, Afghanistan, Pakistan, Yemen and Somalia. Even as the Islamic State continues to lose territory in Iraq and Syria, there are no signs that the bombing campaign will narrow in the near future.

“One of the things Obama has had to struggle with and the next president will, too, is that the use of military power — the United States killing people overseas — occurs so frequently now that it just kind of washes over the debate,” Chollet said. “It has become almost too easy. No one even notices it any more. It’s just a constant.”

This is one of the legacies of Obama’s tenure in the White House. As president, he promised to end America’s wars in Iraq and Afghanistan. Since taking office, he has cut the number of U.S. troops deployed to war zones around the world from 180,000 to fewer than 15,000.

The wars, however, have not ended. Instead, Obama, through a reliance on drones and special operators, has succeeded in making them nearly invisible.

Greg Jaffe covers the White House for The Washington Post, where he has been since March 2009. Follow @GregJaffe

Why are @POTUS‘s #s of civilian deaths from drone strikes so laughably low? Sources say could be 8x higher! 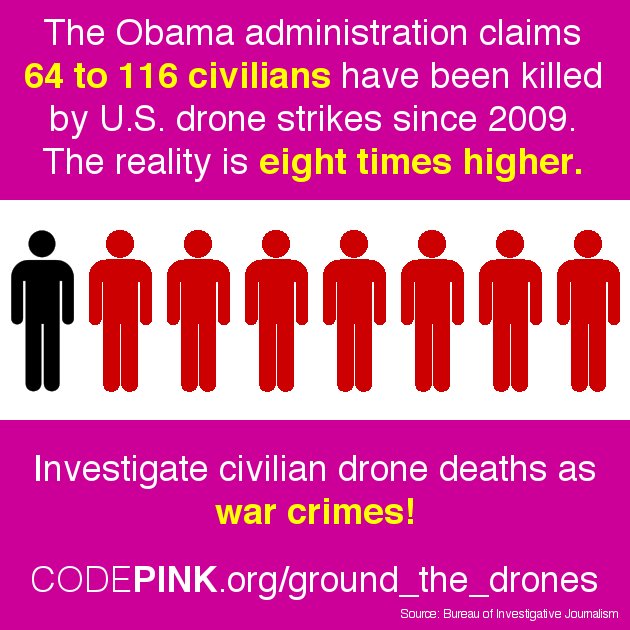 More Proof That US Is Falsifying Drone Deaths

The new report claims that the U.S. government has misled the public and hindered accountability.
A new report, released by international human rights organization Reprieve, has detailed how the U.S. government’s previous statements regarding civilian deaths from drone strikes have been false. Thursday’s report comes ahead of an expected official announcement on the issue.
+++