Mary Beaudoin: Speech at “We Know Who is Responsible” contingent of “People’s Climate Convergence March” September 21, 2014 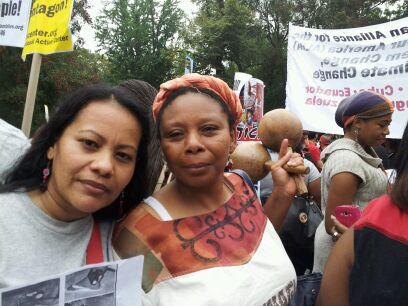 Some of the most inspiring and empowering voices in the environmental movement are those of indigenous women around the world and in the U.S. In both consumer consumption and in its military’s institutional consumption of oil, the U.S. bears an enormous responsibility for environmental degradation and destruction in other countries and domestically.

The effect of the U.S. military on the environment is high, yet rarely considered.

These policies adopt a feminine disguise in “Soft Power” tactics to carry them out. We need to call out the hypocrisy of the so-called “Responsibility to Protect” (R2P) that does anything but protect people. War is being waged under the guise of protecting people but it kills them and destroys their environments instead. And wars don’t only destroy immediately with bombs, they also create massive toxins throughout any area they are dropped on as vital infrastructure is destroyed—water and sewer systems, chemicals and toxins from factories are released. Air, water and soil are contaminated. Whole agricultural areas are destroyed. It is a war crime to target civilians and civilian infrastructure but in today’s wars anyone and anything is considered a target. 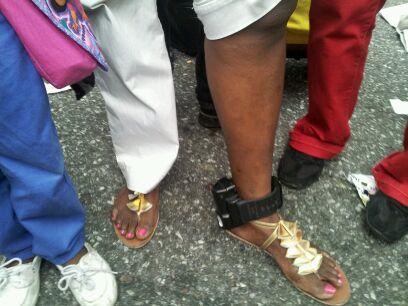 In politics and other spheres, many U.S. women under the dominant rapacious economic system, are being co-opted. We are asked to celebrate the successes of individual women breaking through the glass ceiling in the world of male privilege—especially male privilege of the elite—rather than working collectively to attain and enjoy rights and conditions that create a better life for all women. There is no trickling down of success through policies instituted by women who play the hierarchal game of elite control of the world and its resources—in fact, those women who do play by those rules, in spite of a few token gestures and lip service, are actually likely to perpetuate unjust policies that are harmful to the women in the world.

And it comes home, as well. Scrap metal from the detritus of war that was exposed to depleted uranium (DU) is sold around the world and can be made into common consumer items. The chemical percholate that is used to fire off rockets is manufactured in the U.S. and has been found in mother’s milk in several states.

We need to harness the real power of women everywhere and demand an end to these insane wars that are destroying humanity and the planet, and especially take inspiration from our indigenous sisters. And we also must demand an end to the outrageous persecution of women immigrants and antiwar activists—the demonizing of women in modern-day witchhunts–that has accompanied our work to defend against war and injustice. 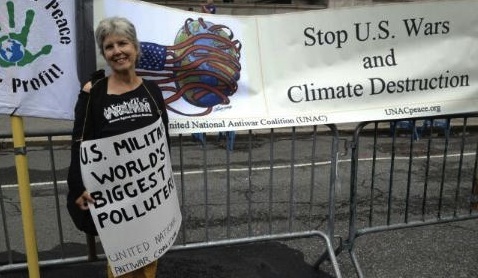 Mary Beaudoin is a member of Women Against Military Madness (WAMM) and the editor of the WAMM Newsletter. She has worked tirelessly against war and also has worked against racial violence for many years. She attended and participated in the People’s Convergence Climate March in New York City on September 21, 2014 and also in the Flood Wall Street action on September 22, 2014.

Photos by Mary Beaudoin. Photo of Mary by a friend.

Donate
By Rise Up TimesPublished On: September 28th, 20141 Comment