Minnesota’s own tar sands pipeline runs 285-miles across northern Minnesota, online since October 2010, with volume increases in the works larger than Keystone XL.

TransCanada’s Keystone XL tar sands pipeline holds a climate changing reputation among environmentalists. Another Canadian tar sands oil pipe transport company, Enbridge Energy L.P., with a pipeline already in the ground and online since October 2010, may soon exceed Keystone XL in capacity.
Enbridge’s Line 67, the “Alberta Clipper,” is in the Minnesota Public Utilities Commission permit process to carry 880,000 bpd (barrels per day) of diluted bitumen, or tar sands oil. Keystone XL is in the US presidential process for 830,000 bpd capacity.
To put this amount of oil in focus, both the TransCanada and Enbridge pipelines would exceed the nation of Iran’s permitted oil transport under sanctions. In May of this year Iran pumped 700,000 bpd The Economist reported (6/22/13. p.11). 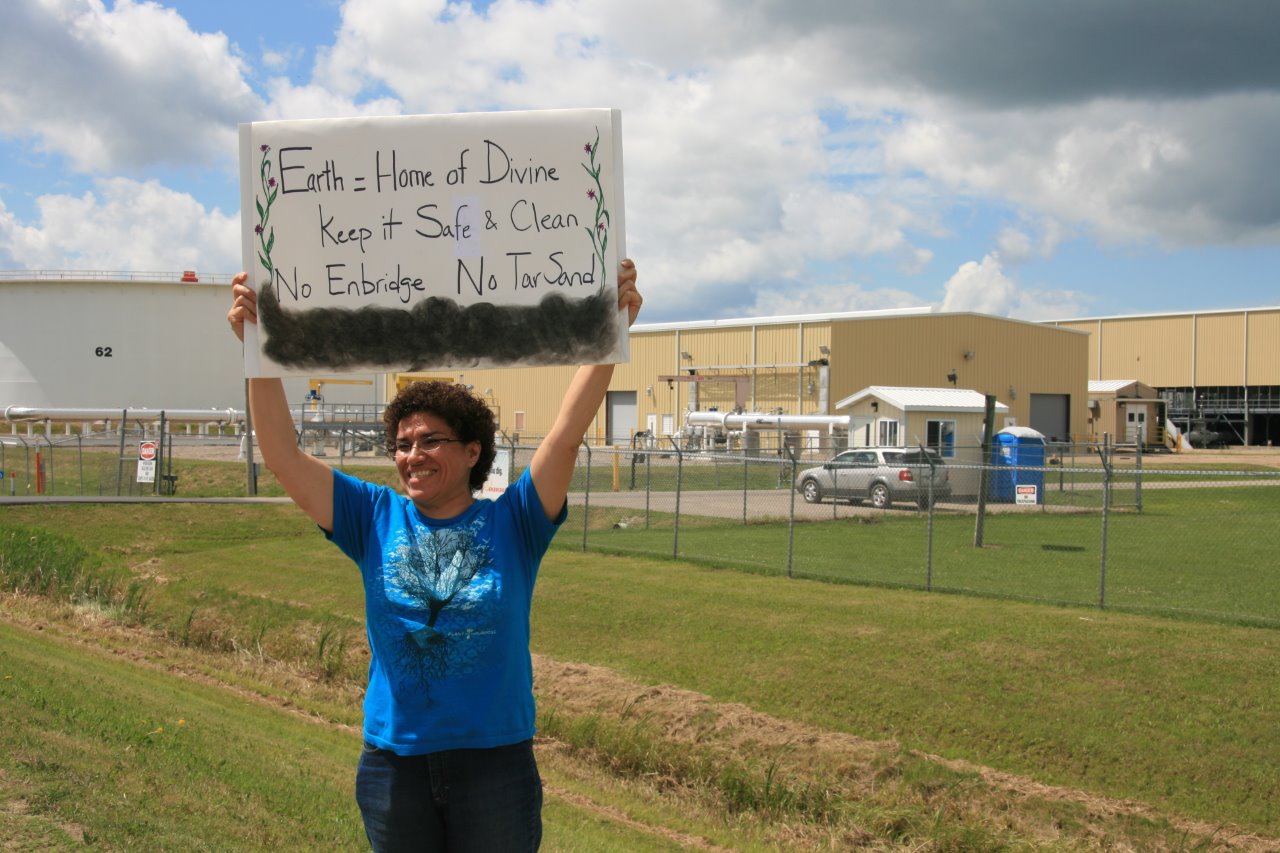 Iranian-American Roya Damsaz in front of Enbridge’s “tank farm” at Clearbrook, Minnesota. If Enbridge’s two requested volume increases pass the Minnesota Public Utilities Commission, a single tar sands pipeline will carry more oil than Iran is allowed under sanctions. The round, white tank on the left holds 500,000 barrels of oil. There are nine Enbridge tanks at the Clearbrook facility. The Koch brothers Minnesota pipeline is directly across the street. Clearbrook’s population was 518 at the 2010 census; it’s an oil town.
The U.S. is now an energy exporter.

Enbridge’s 285-mile “Alberta Clipper” crosses the Mississippi River headwaters five (5) times. It also intercepts headwaters flowing northward to Hudson Bay and eastward to Lake Superior and the St. Lawrence. Enbridge has multiple other pipelines paralleling this one as well.
Single pipeline leaks under 1 percent or 2 percent do not register on internal leak detection systems. The State DEIS for Keystone XL notes that several small leaks on the Keystone XL pipeline could leak as much as five percent of its capacity, or 1.7 million gallons a day, without triggering its leak detection system. 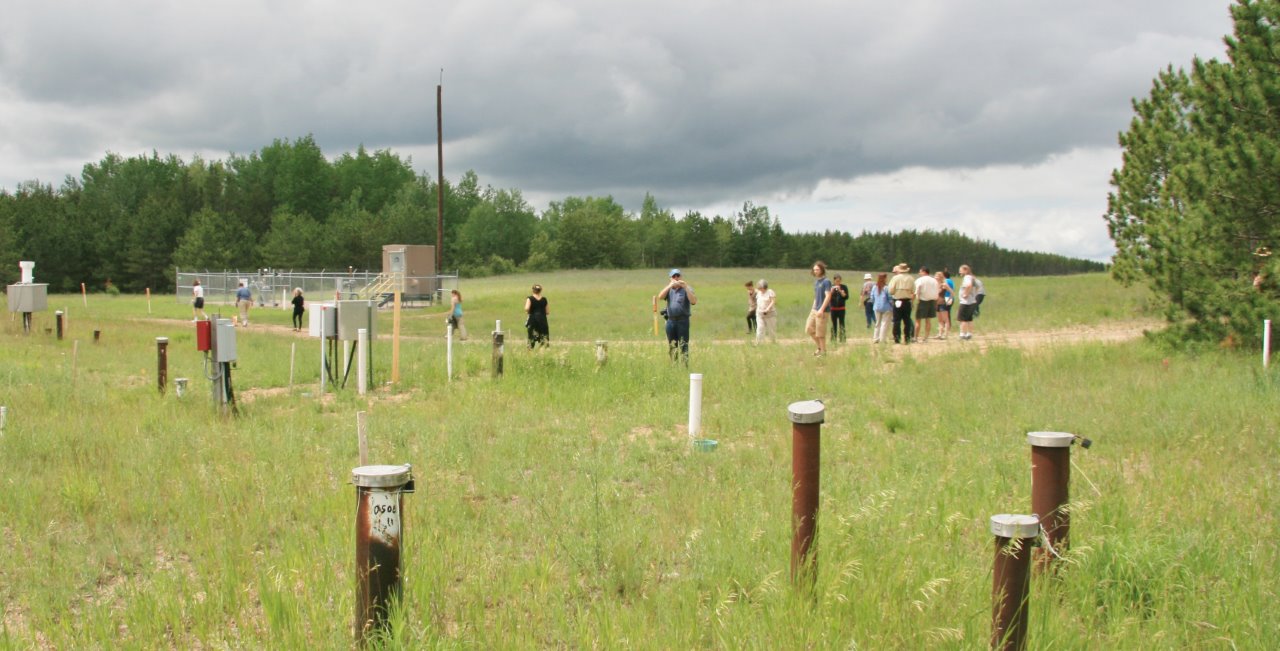 Enbridge’s Pinewood oil spill in Beltrami County, Minnesota, was discovered in August 1979 and is being “studied.” Of the approximate 10,000 barrels spilled, 2,500 barrels remain in the ground 34 years later.

The Enbridge “Alberta Clipper” runs from Hardisty, Alberta, Canada, through a bit of northeast North Dakota, across northern Minnesota to the city of Superior, Wisconsin (sister city to Duluth, Minnesota, on Lake Superior). There are multiple tar sands oil pipelines to transport Enbridge diluted bitumen to the Midwest, and to the East and Gulf coasts for export.
Enbridge is currently requesting a 26.6 percent (120,000 barrels per day) increase in sands oil through the “Alberta Clipper” pipeline from 450,000 to 570,000 bpd. We await the Minnesota Public Utilities Commission decision on the Clipper increase with our presence on the land and at hearings, with comments and public pressure.
The next increase, already in the works, from 570 bpd to 880,000 bpd would bring the total to a 97.85 percent increase in the existing pipe. That increase would require stronger pumping pressure as well as more pumping stations. It would carry a greater volume than the Keystone XL designed to move 830,000 bpd.
An Enbridge sands oil spill on July 25, 2010, was flushed into the Kalamazoo River (Michigan) where clean up costs are approaching $1 billion. Enbridge has been ordered to remove submerged tainted soil from 80 to 100 acres of river bottom. The Calhoun County Public Health Department (269-969-6371) closed parts of the river to swimming, fishing, even boating “until further notice.”
Tar sands oil is very thick, dense, sinks quickly and must be captured within 24 to 48 hours before it adheres to surrounding soil.  It is extracted with open pit mining or in-situ methods and is the most expensive fuel in the world because it requires extensive treatment before use as fuel.
Pipelines vary in diameter but oil pipelines are only 1/2 to 1/3 inch thick. The very dense bitumen is diluted, 40 percent is often quoted, so it will flow. Benzene and other substances in a protected recipe are mixed to liquefy the oil enough to be pushed through the pipes—at 100 degrees F.
The heat and abrasive quality of the oil and lubricants, diluted bitumen or “dilbit,” wear on the pipes (disputed by the industry). Some of the toxic dilutants, mixed together, are piped back for reuse, doubling the chance of spills. 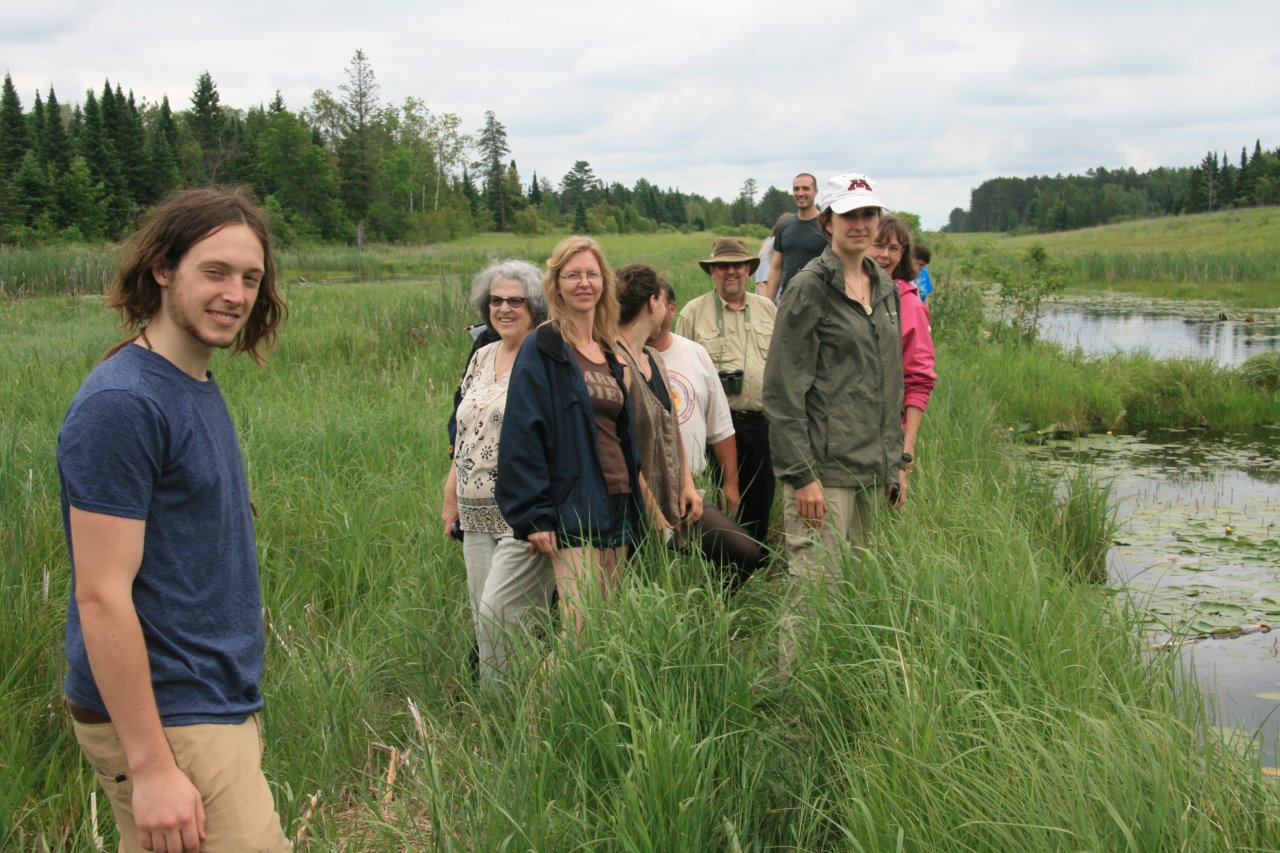 A busload of Twin Cities environmentalists actually see where six Enbridge pipelines run through a clear cut swath of boreal forest and wetland in Clearwater County, near Red Lake Indian Reservation. The Enbridge pipelines cross the mother waters of the Mississippi River in northern Minnesota as well as water flowing north to Hudson Bay and east out the Great Lakes and St. Lawrence River to the Atlantic. This water-rich area is the great continental divide at the heart of Turtle Island, North America.  6/13

Pipeline weaknesses occur where the long steel sheets are welded into round pipes, where pipe ends are welded together, and also along stress cracks in a pipe damaged in transport or placement.

Keystone XL is a shortcut pipeline in the fight between two of the Canadian pipeline profiteer corporations, TransCanada and Enbridge. The first Keystone pipeline was built just months before the “Alberta Clipper.” Now Enbridge’s planned “capacity increase” would require more powerful pumping at more stations than the current 50 mile intervals, and the “Alberta Clipper” might come online before Keystone XL.
It’s a corporate pipeline turf war because within about five years the easy sands oil will be played out. The destructive production techniques may be regulated so it’s an extraction race to get the money and run.
Current legislation cannot keep up with industrial extraction technology. Bolivia has a rights of nature clause in its constitution so that it does not have to battle pipelines or mines one at a time.
Enbridge began laying oil pipelines on Red Lake Indian Reservation ceded land without permission in 1949. Red Lake Anishinabe (Ojibwe) people and the Indigenous Environmental Network (IEN) established an encampment on top of Enbridge pipelines and have occupied the land since February 28, 2013, with little public notice. 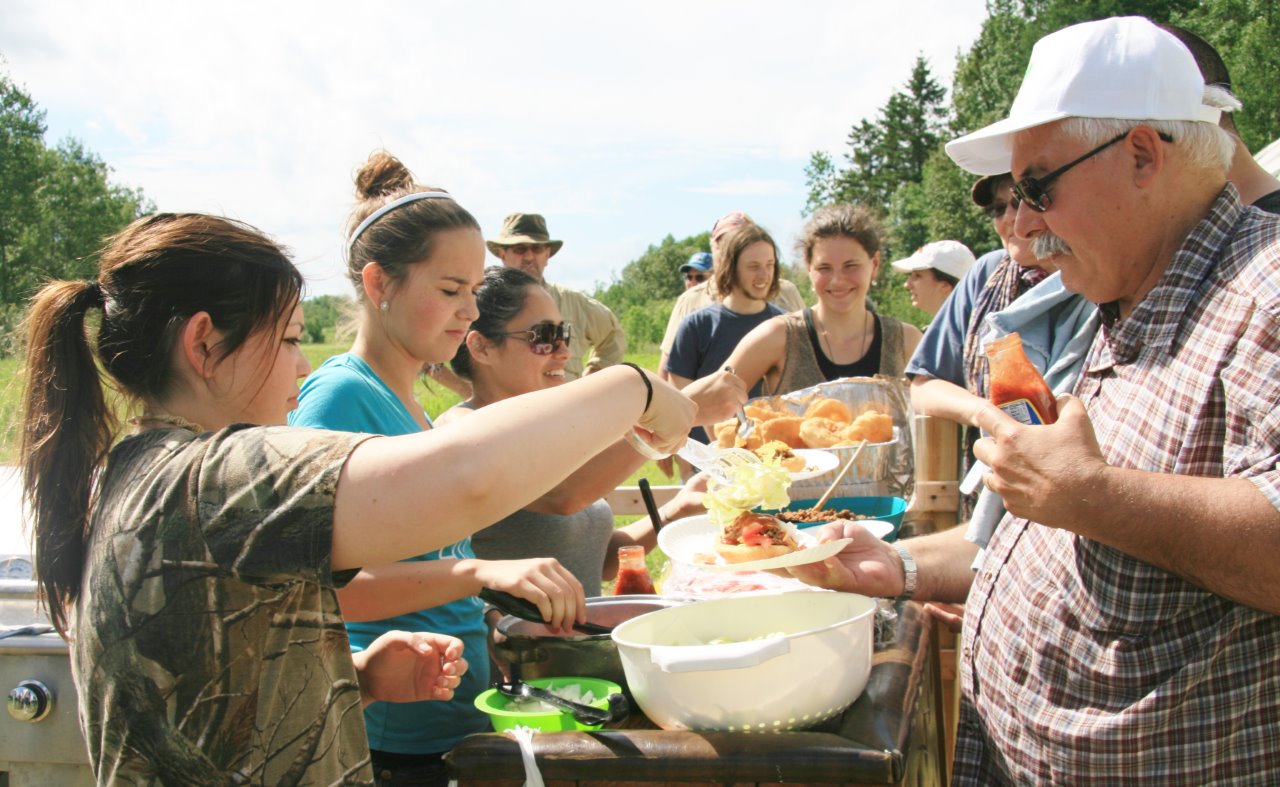 Hospitality for the eco-tourists at Red Lake Ojibwe encampment in Leonard, Clearwater County, Minnesota—atop oil pipelines. Enbridge rules do not allow oil through pipelines if people or structures are present. The Red Lake tribal chairman wrote to Enbridge in January 2012 telling Enbridge to remove the pipelines.

While the “Alberta Clipper” and Keystone XL are both threats to climate and political stability, the Clipper is already in place and in use. Both pipeline systems potentially poison vast sources of water in North America.
The difference between the two is that parts of the Enbridge route are laid through Indian Country where poverty is rampant and political power slim. The Keystone-Ogallala pipe path intercepts more landed people with, for example, 10,000 head of cattle and the political clout that marries money to power.
If President Obama denies the XL permission to cross into our nation, it would be a win for environmentalists. However, Congress might still override the decision giving the short-term financial win to the corporate-government complex.
Oil pipelines spiderweb North America. (Canadian Association of Petroleum Producers)
Of course it would be more direct to pipe western Canadian oil towards the Pacific rather than route it through the U.S. Midwest. The First Nations people in Canada were able to refuse permission for oil pipelines across their sovereign lands.
Every dollar we invest in fossils we steal from the next generation. A recent Global News investigation found that over the past 37 years, Alberta’s extensive network of pipelines has experienced 28,666 crude oil spills in total, plus another 31,453 spills of a variety of other liquids used in oil and gas production—from salt water to liquid petroleum. That averages out to two crude oil spills a day, every day.
Bully oil seems unstoppable. Nevertheless the EPA and Arkansas Attorney General filed a federal lawsuit and a class action suit against ExxonMobil over the Pegasus spill in Mayflower, Arkansas.

Video: Red Lake Nation Tribal Members Blockade Enbridge Pipelines
(COINTELULZ-scroll down and then across to see the original video[youtube=http://www.youtube.com/watch?v=IAhOoG3MXt4&w=560&h=315] March 2, 2013

(COINTELULZ-scroll down and then across to see the original video)[youtube=http://www.youtube.com/watch?v=lYQHWtMdPhc&w=560&h=315] December 22, 2012

Donate
By Rise Up TimesPublished On: July 11th, 20132 Comments