Though the 2020 murder of George Floyd inspired a global racial reckoning, the injustices he faced date back to his childhood in the 1980s.

On December 27, President Donald Trump finally did what many people expected and hoped he would do: capitulate and sign the $900 trillion spending and stimulus bill that landed on his desk last week.

The war on drugs, started by Richard Nixon but made famous by Reagan and his wife, Nancy, ushered in a reign of terror of sorts for working-class Black families like Floyd’s.

Trump dragged his feet for days, albeit at a Mar-a-Lago golf course, while millions of Americans waited for a final decision: Would he sign the bill and therefore allow emergency relief payments to be processed?

In all likelihood, Trump ultimately signed the bill because he had no real plan, other than the momentary, Trumpian thrill of causing chaos and manifesting a new plot twist. Would he sign it, or wouldn’t he? How exactly will this latest episode of the Trump-as-President reality show end?

Trump signed the bill, and the $600 stimulus payments that come with it will soon begin to flow, like drips from a rusty faucet, into bank accounts and mailboxes across the country. The money is nowhere near enough to help us, as a nation, begin to address the structural inequalities that define our lives.

There are two things I can’t stop thinking about that have led me to this conclusion. The first is the life of George Floyd, the Black man whose May 2020 killing by a white Minneapolis police officer inspired a global racial reckoning.

The second is the oh-so-shocking news out of the London School of Economics and King’s College London. There, a new working paper analyzing the concept of trickle-down economics, and its companion tactic, tax cuts for the rich, has found that these policies have done little but line the already full pockets of the wealthiest among us.

On December 27, the same day that Trump finally signed the paltry-but-necessary stimulus and government spending bill, the Star Tribune published a lengthy look at the life and death of Floyd. It begins where Floyd’s life first took shape, in the dilapidated confines of a rundown neighborhood in Houston, Texas.

Floyd was raised by a single mother in a racially and economically isolated public-housing development, where he and his siblings often did not have enough to eat. The family of six was crammed together with too few beds, yet Floyd’s mother was reportedly a generous soul who took in other kids in need.

Floyd was born in 1973 and came of age in the 1980s. Ronald Reagan’s presidency shaped the backdrop of his formative years, when austerity measures and trickle-down economics were bumping up against the gross excesses of Wall Street and the glorification of the yuppie lifestyle.

A 2019 piece in The Washington Post, from historian Bruce J. Shulman, describes a through line from the yuppism of the 1980s, where conspicuous consumption reigned, to Trump’s presidency. In hindsight, Shulman writes, “the brief heyday of the yuppie actually represented the birth of Trumpism: hedonism, financial recklessness and contempt for tradition.”

While hedonism was running rampant among young, white, urban professionals, George Floyd and his family and friends were caught up in another hallmark of the 1980s: the war on drugs. Floyd was an athletic kid, providing him the illusion of a simple way out of his community. If he did well on the ball field, he could possibly nab one of the athletic scholarships that are often dangled in front of struggling young men of color.

Floyd played football for South Florida Community College, earning an associate of arts degree. He then went on to Texas A&M before dropping out and returning home to the Houston neighborhood of his youth.

One of Floyd’s aunts, interviewed by Star Tribune reporter Maya Rao, said she “wondered if the pressure had begun to consume him: striving for athletic stardom while trying to climb out of poverty.” Floyd’s family continued to live in an area that was increasingly beset by drugs, addiction, and aggressive policing tactics.

The war on drugs, started by Richard Nixon but made famous by Reagan and his wife, Nancy, ushered in a reign of terror of sorts for working-class Black families like Floyd’s. Further criminalizing drugs through zero-tolerance laws helped privatize U.S. prisons; that’s where Floyd ended up, too.

Floyd’s increasingly longer prison sentences, many of them for questionable convictions, caused him to begin panicking rather than surviving, according to those who knew him then. He eventually became a devout Christian and a helper in his neighborhood, though still besieged by addiction issues of his own. 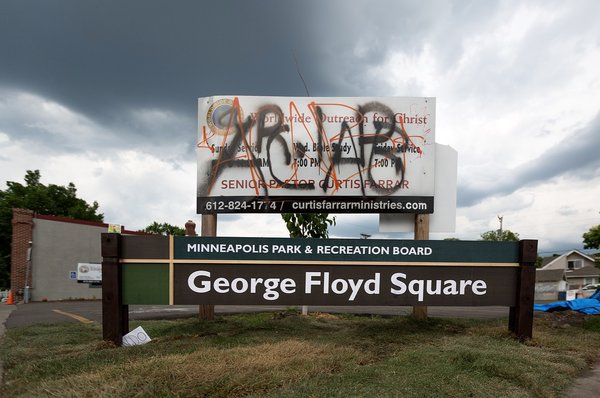 An informal network from Houston to Minnesota had been established for those seeking a fresh start and access to the more generous, publicly funded drug recovery programs available here. That’s what led Floyd to Minneapolis, where he would eventually become the victim of a violent murder under the knee of a white police officer, Derek Chauvin.

The spot where he was killed, now called George Floyd Square, has remained closed and occupied by activists and members of the community ever since. It serves as a monument to the tragic circumstances surrounding Floyd’s life and murder, as well as a place of burgeoning resilience and grassroots community building.

Minnesota Public Radio recently profiled Jeanette Rupert, a Black nurse who grew up in the neighborhood where Floyd was killed. She has returned to the area to help run 612 MASH, a new nonprofit dedicated to providing medical care to communities in need.

Through her work on the street and in a COVID-19 unit at a local hospital, Rupert is reminded every day of the “artifacts of problems so deep and prolonged that they seem insurmountable,” given the current epidemics of gun violence and COVID-19 spreading through the Black community in Minneapolis and elsewhere.

A long overdue, cruelly upheld $600 check from the federal government is a perpetuation of, rather than a remedy for, such deeply entrenched maladies.

Sarah Lahm is a Minneapolis-based writer and researcher. Her work has appeared in outlets such as The Progressive, where she writes the Midwest Dispatch column and contributes pieces to the Public School Shakedown site.

Donate
By Rise Up TimesPublished On: January 8th, 2021Comments Off on Midwest Dispatch: How Past Economic Policies Influenced Racism of Today, by Sara Lahm