The book is as timely today as it was when it was first published in 1984 because when it comes to smearing critics of Israel, with few exceptions — the Israeli lobby still gets its way. 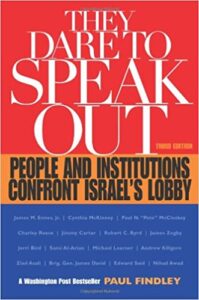 With the encouragement of friends and after serving eleven terms in the U.S. House of Representatives (1961-1983), Congressman Paul Findley (R-IL) wrote a book, They Dare to Speak Out, about influences and pressures inside the Israeli lobby.

His was the first book to point out ways the American Israel Public Affairs Committee (AIPAC), along with pro-Israel affiliates, use recruiting inducements and propaganda to steer political candidates toward a favorable view of Israel. It also exposed how Zionists in Israel and the U.S. get away with surreptitiously funneling money and perks to political allies while smearing its detractors — something the author had experience with firsthand.

Findley took an interest in Middle East politics in 1974 when he returned home from a humanitarian mission in the south of Yemen where he secured the release of an imprisoned American. His perceptions of the region changed after research and discussions with area experts — “Gradually, Arabs emerged as human beings” he recalled.

His trouble with the Israeli lobby began later in the 70s after he opened a dialogue with Chairman of the Palestinian Liberation Organization (PLO) Yasser Arafat, against the wishes of Israel and U.S. Secretary of State Henry Kissinger. While those conversations proved helpful to Americans with the freeing of American hostages in Iran, the U.S. refused to formally acknowledge the talks and Findley was tagged as an anti-Semite even though he was also against officially recognizing the PLO. In 1980 he said “it makes sense for us to talk to the PLO, to communicate with them and try to influence their behavior. It would reduce tension and conflict in that area. We can’t wish the Palestinians away — they’re a fact.”

Nevertheless, he was maligned by hard-case Zionists and shunned by colleagues in his own party for the rest of his career. President Ronald Regan going so far as to avoid any contact with him during a campaign stop in his district. Hollywood star Bob Hope backed out of an agreement to help Findley with his 1980 campaign after hearing stories he was a PLO sympathizer and betrayer of Jews.

Two years later Findley lost his bid for re-election by less than 1% of the vote. AIPAC executive director Thomas A. Dine noted three days after the election that 150 students from the University of Illinois had been recruited to “pound the pavement and knock on doors” adding “This is a case where the Jewish lobby made a difference. We beat the odds and defeated Findley.” Despite both candidates raising similar amounts of money, Dine estimated that $685,000 of $750,000 raised by Findley’s opponent came from Jews.

Among others who incurred the wrath of the Israeli lobby were reporters, educators, and politicians from both parties. Former Illinois Governor, Senator and Ambassador to the UN Adlai Stevenson III (D-lL) received numerous honors from Jewish organizations before he became the target of a smear campaign when he criticized Israeli polices and called for a halt in settlement funding. After that Senator Rudy Boschwitz (R-MN) commented at a breakfast gathering in Chicago that Stevenson was “a very steadfast foe of aid to Israel” and Dine would chime in again “The memory of Adlai Stevenson’s hostility toward Israel during his Senate tenure lost him the Jewish vote in Illinois and that cost him the gubernatorial election.”

Like Stevenson, U.S. Senator and Congressman J. William Fulbright (D-Ark) was accused of being anti-Semitic for questioning aid to Israel and advocating for an investigation that exposed an illegal scheme Israelis used to funnel five-million dollars into the American Zionist Council. Before leaving the Senate he warned “Endlessly pressing the United States for money and arms—and invariably getting all and more than she asks—Israel makes bad use of a good friend.”

Tentacles from the Israeli lobby put a stranglehold on campus too. Curricula focusing on Arab culture and history were investigated for possible anti-Israel biases, academic conferences were mercilessly scrutinized for speakers critical of Israeli policies and AIPAC created files on intellectual dissidents including Jews like Noam Chomsky. Not content with ostracizing critical thinkers and threatening to cut off academic grants, AIPAC and its ilk started training student activists in 1979 to increase pro-Israel influence on campus with the Political Leadership Development Program. Four years later over 5,000 students were onboard with their agenda.

Other Jews worried privately about blowback or even losing their jobs if they openly complained about Israeli injustice. First Amendment champ and Jewish writer Nat Hentoff frequently wrote about those fears in his New York Village Voice column. And radical Jewish journalist I. F. Stone noted the massive amounts of hate mail reporters received if they expressed “one word of sympathy for Palestinian Arab refugees.”

In Minneapolis, journalist Richard Broderick used his weekly “Mediawatch” column in the Twin City Reader to point out media biases favoring Israel when it invaded Syria in 1982. This disturbed some readers including area movie distributors who threatened to pull advertising. Not wanting to lose a huge amount of revenue, the paper’s editor offered disgruntled advertisers space for a 1,000 word unedited rebuttal.

Broderick came under fire again that summer after calling out local media for not bothering to check a source Senator Boschwitz used to suggest Syria welcomed the attacks. After doing some research he discovered that Boschwitz’s source, the American Lebanon League (ALL) was not only in favor of Israel invading Syria in 1982, it was, according to the American-Arab Anti- Discrimination Committee (ADC), “the unregistered foreign agent of the Phalange Party and the Lebanese Front. They work in close consultation with AIPAC, which creates for them their political openings.”

After Broderick made the information public, Senator Boschwitz got on the phone and bawled him and his editor out — and according to Broderick during a recent FB chat with me, the Chief of Staff in Senator Boschwitz’s office informed the business association representing predominantly Jewish theater owners that the Twin City Reader had a “Nazi” on its staff. He also mentioned he wasn’t anti-Israel or dissing Boschwitz, he was simply doing his job as a reporter by investigating a source and had no idea he’d be fired for that. Nonetheless he was told not to write anymore commentaries, which he refused to do and was let go a few weeks later.

Lucky for Findley he didn’t have a boss who could get rid of him for checking sources or looking for pieces of information that might solve a puzzle. Although he had trouble with sources who were reluctant to go on record, he found enough who weren’t and collected more than enough surprising facts and discovered enough underhanded strategies to keep readers turning the page. His narrative which sometimes evokes the sinister cleverness of a spy novel can also be a reliable reference for those interested in how a foreign power, along with its operatives, affected so many Americans from the 50’s to the early 80’s.

The book is as timely today as it was when it was first published in 1984 because when it comes to smearing critics of Israel, with few exceptions — the Israeli lobby still gets its way.

They Dare To Speak Out is available to read for free here.

Craig Wood is a Minneapolis writer and member of Veterans For Peace. He can be reached at craig2mpls@yahoo.com

Donate
By Rise Up TimesPublished On: December 14th, 2020Comments Off on Those Who Don’t Fear the Lobby, by Craig Wood