Learning From Civil Resistance Around The World

…activists and organizers in many countries tell me that they understand they can no longer operate based on trial and error. This is especially true because they’re increasingly facing opponents who have massive resources at their disposal, including manipulation of the media, banks, and transportation systems, as well as the tools of violent repression — the police, military, and prisons. 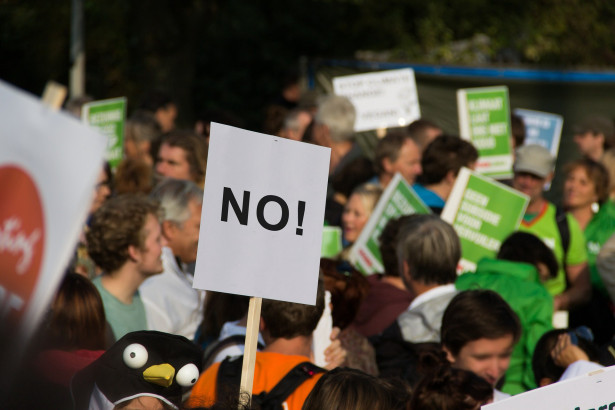 Above Photo: From Medium.com

There’s a lot of debate in the United States about the direction of the country. People are realizing that simply putting faith in their elected leadership or in existing institutions to solve problems in their communities is not adequate. They also realize that on its own, protesting policies they don’t agree with does little to change them fundamentally, if these actions are not part of a larger strategy. Recognizing that weak and fragmented people cannot be expected to act effectively on social and political issues, they’re increasingly organizing in ways that actually build their power capacity.

The power of nonviolent action is built on the strength and capacity of people, as proven by recent protest movements across the globe.

So, in addition to holding large protest rallies and marches, they’re working to create networks of people — usually small groups of 10 to 15 who meet periodically in living rooms, workplaces, classrooms, and places of worship across America. They speak about the issues that are important to them and how they might act together in a crisis. They organize educational workshops, discuss their strengths and weaknesses, the resources they have and those they can get, to meet the needs of their communities and fight for the issues they care about. In short, they’re learning that their effectiveness depends, to a large degree, on the extent to which they think strategically and develop a wise plan. 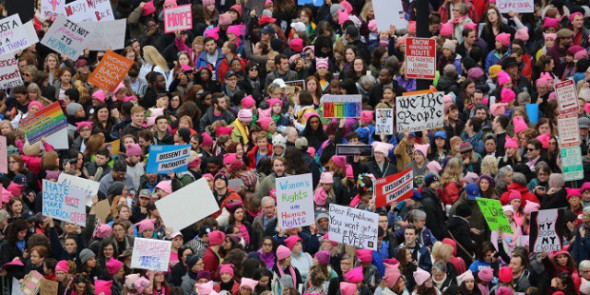 More than a million people gathered for women’s marches in hundreds of cities across the United States on January 21, 2017. Another million-plus also held rallies around the world. Credit: Voice of America, via Wikimedia Commons

Americans could also look elsewhere for lessons in effective protest. Recently in Romania, for instance, after just two weeks in power, the newly elected government announced a decree that would decriminalize certain corruption offenses. This was the breaking point for many Romanians who saw the decree as an example of the wider system of injustice and corruption that plagued their country. They also saw it as an attempt by the Romanian government to protect its own members from being prosecuted, since so many of the people who faced such charges were government officials.

To make matters worse, the decree was announced at midnight, with the government saying that it would go into effect in the following days. Information spread quickly through social media and, within hours, thousands of people had gathered in the main square of Bucharest, the nation’s capital. 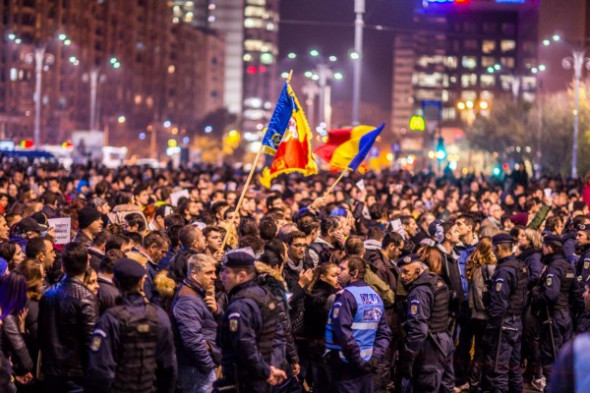 Across Romania in early 2017, a government decree to decriminalize official abuses sparked protests that swelled in size over the following week and culminated in the repeal of the controversial decree. Credit: Rezistam.eu via Wikimedia Commons

Protesting crowds swelled across Romania over the next few days, leading to the largest such gatherings since the fall of communism in 1989. Even amidst heavy snow and freezing temperatures, more and more citizens joined in to pressure the government to withdraw the decree. Almost a week later, during the largest protest so far, media outlets estimated that more than half a million Romanians gathered in cities around the country. In Bucharest, protesters (in the aptly named Victory Square) sang their national anthem and used their cellphones to create a massive illumination to symbolize shedding light on corruption. They went on to hold a children’s protest and another one where people brought their dogs.

After six consecutive days of protests, the government backed down. It was apparent that they could not withstand the pressure from their citizens. On February 4, the government repealed the law, and five days later, the Justice Minister who had backed the legislation resigned.

The effectiveness of the demonstrations in Romania reveal an important insight: corrupt and oppressive governments count on people’s weakness and passivity in order to carry out abuses. But these abuses are only possible when people are too weak to defend against them. The protection of human rights and democratic freedoms depends on the existence of an organized, connected, and engaged citizenry that both understands their rights, and what they should do if those rights are violated.

Hundreds of thousands of Romanians proved this to be true.

We’re seeing the rise of so-called “populist” leaders in many countries, who take advantage of people’s frustrations with social, political, and economic issues and citizens’ sense of helplessness and disempowerment. These leaders capitalize on those feelings to claim that they alone can deliver the changes their citizens desperately want.

The good news is that the tools to fight these conditions exist and are being refined every day by scholars, activists, and organizers in numerous countries. I’ve witnessed this over the past 15 years at the Albert Einstein Institution, where I’ve been studying nonviolent resistance and its use by people throughout history and across the globe today. The Institution was founded in 1983 by the scholar Gene Sharp, and since then it has produced dozens of books on the topic which, along with other educational efforts, have been an important way for people to learn about nonviolent struggle — how it works, and how it can be applied to advance the issues that are crucial to them.

As well, Sharp has created a list of 198 methods of nonviolent action — specific actions that people can carry out — ranging from protests and social boycotts, to economic boycotts, labor strikes, political noncooperation, and finally nonviolent intervention, which is the most powerful category of methods in the nonviolent arsenal. 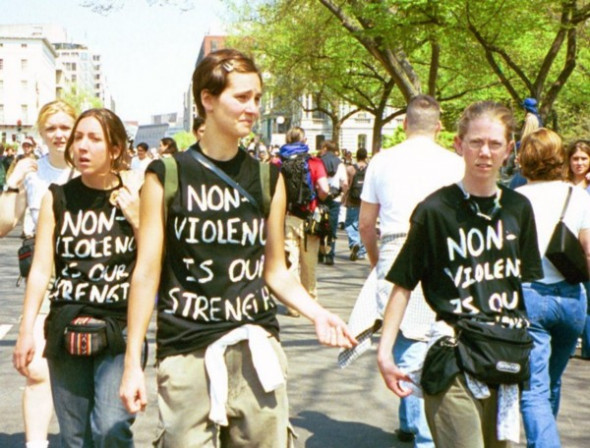 People are increasingly recognizing that there are fundamental issues at stake if they do nothing but accept the status quo; and that a future of oppression, degradation of the rights of women, minorities, and workers, and the destruction of the environment is not inevitable provided they act to block it. In what often seems like a dark world full of violence and injustice, we should be encouraged by the spread of social, political, and environmental movements that are using courage, creativity, and wise thinking to fight for human rights and democracy.

Lessons shared across the world 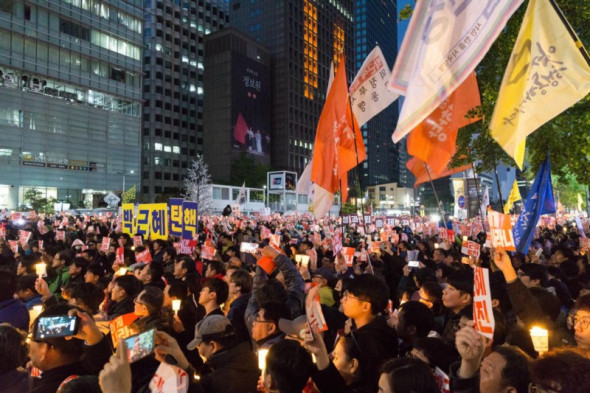 Since October of 2016, South Korea has been experiencing the largest protests in its history, sparked by an extortion and corruption scandal involving then-President Park Geun-hye. Protests calling for her resignation started in early December, and in the course of a few weeks they grew from just a few thousand people to almost two million. Lawmakers then voted to impeach the president. But protests continued until March 9 when South Korea’s constitutional court decided to uphold the impeachment. Park Geun-hye has lost not only her political position but also immunity from prosecution, and she now faces possible criminal charges. 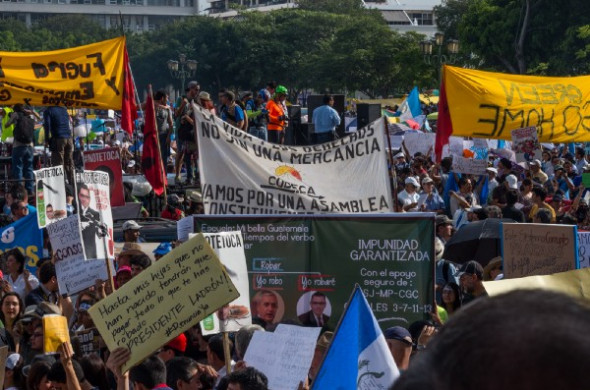 Recently I was in touch with a group from South Korea and I asked them about where they were getting information and inspiration to help them conduct their struggle. Their answer surprised me because they told me that, in part, it came from halfway across the globe — it came from the anti-corruption movement in Guatemala.

There in 2015, almost 21 weeks of protests and a general strike across Guatemala led to the resignation of President Pérez Molina amidst corruption charges. That outcome encouraged South Korean activists, not only because ordinary people had achieved such a stunning victory, but also because they saw the Guatemalan experience as a source of strategic insight for what they themselves should do.

The fact that the South Korean protesters studied the Guatemalan case signals the rise in movement learning. By that, I mean knowledge about the operation of nonviolent action and historical uses of the technique, as well as real-time information about how people are conducting struggles in other countries. Such learning has been greatly facilitated by social media and technological tools.

As well, activists and organizers in many countries tell me that they understand they can no longer operate based on trial and error. This is especially true because they’re increasingly facing opponents who have massive resources at their disposal, including manipulation of the media, banks, and transportation systems, as well as the tools of violent repression — the police, military, and prisons. And, these opponents are constantly learning and developing better techniques to defeat social and political movements, which means that activists must also innovate in order to have a chance of winning this nonviolent arms race.

Movements are learning from each other, and that reveals another powerful insight: What we do in our small corner of the planet — whether we accept a future of oppression, violence, and injustice; or whether we choose to fight against these conditions — will affect not only our lives and our communities, but also the lives of people in places that are far away, who may be looking to us for inspiration and knowledge.