Note: Minnesota is one of the states where legislation is proposed. A demonstration called for tomorrow (Thursday, February 16) at the capitol in St. Paul at 4 pm (4 to 5:30 pm).

Republican legislator Nick Zerwas presented bill HF 322 that would directly criminalize protesters for voicing concerns and being in the streets. This bill is a direct response to various community-led movements such as the Movement for Black Lives, Labor Movement, and the Women’s Movement that have sparked in Minnesota and nationwide.

Additionally, the bill aims to discourage our right to assemble peacefully and dissent. We refuse to remain silent and let this bill pass. We need everyone to show up and show out if willing and able. Our voices will not be censored and suppressed.

The rally will start at 4:00pm. A series of speakers from allied organizations will speak until 5:00pm. Next steps will be announced. 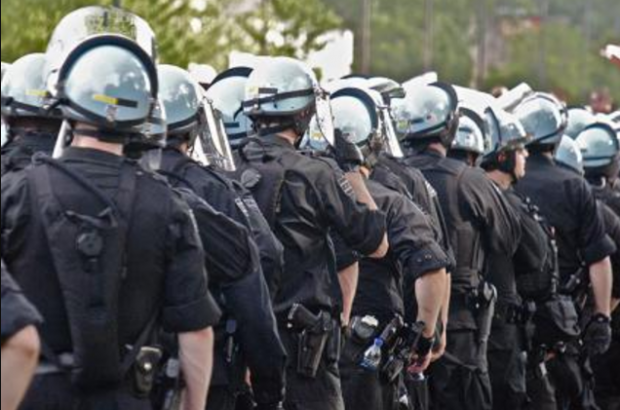 Nicole Colson explains how Republican-led legislatures are trying to push through laws to criminalize dissent–in the hopes of stopping the growing fight against the right.
LESS THAN three weeks into his presidency, Donald Trump is clearly what George W. Bush once claimed to be: “a uniter, not a divider.” Only he’s been uniting many hundreds of thousands of people in protest and many millions in outrage at his bigoted, right-wing actions since taking office.
But Trump’s right-wing admirers around the country have seized on a strategy to push back against mass protest–by criminalizing it. Lawmakers in multiple states are proposing measures explicitly designed to curtail dissent.
As Baher Azmy, legal director at the Center for Constitutional Rights, explained to Rewire, “These legislators, and no doubt future ones, are emboldened by the narrow, authoritarian caste of mind emanating from the new president–one that is ignorant of the basic premises of a healthy democracy and cowardly in the face of peaceful challenges to an unjust status quo.”
Writing at the Intercept, Spencer Woodman points to at least 10 states where Republican lawmakers have introduced legislation that would increase jail time and fines for activists and activist groups charged with violations of law related to protest, label peaceful protesters as “terrorists,” and even condone physical harm against protesters.
“These are reactionary voices who are out to quash dissent, all directed at Black Lives Matter—right-wing legislators who are catering to the prejudices of their base,” attorney Jordan Kushner, a member of the National Lawyers Guild, recently told the Minneapolis Star Tribune. “It’s the Donald Trump trend at the state level.”

Link to Facebook event at the Minnesota State Capitol here.

Donate
By Rise Up TimesPublished On: February 15th, 2017Comments Off on A Crackdown On Our Right To Stand Up