In Syracuse, New York, four people were arrested outside the Hancock Air National Guard Base on Friday at a nonviolent protest against the U.S. drone assassination program. Demonstrators marked the Christmas holiday by dressing as biblical figures and erecting a 20-foot-long nativity scene at the gates of the air base, which is home to the 174th Attack Wing of the National Guard’s Reaper drone program. We turn now to look at what will happen when Donald Trump takes over Obama’s drone war program. We speak to Jameel Jaffer, founding director of the Knight First Amendment Institute at Columbia University. His new book is titled “The Drone Memos: Targeted Killing, Secrecy, and the Law.” 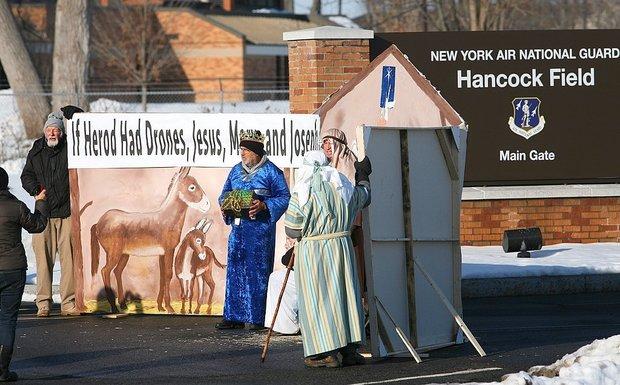 TRANSCRIPT   This is a rush transcript of Part 1. Copy may not be in its final form.

AMY GOODMAN: In Syracuse, New York, four people were arrested outside the Hancock Air National Guard Base Friday at a nonviolent protest against the U.S. drone assassination program. Demonstrators marked the Christmas holiday by dressing as biblical figures and erecting a 20-foot-long nativity scene at the gates of the air base, which is home to the 174th Attack Wing of the National Guard’s Reaper drone program. Mary Anne Grady Flores is with Ithaca Catholic Worker.

MARY ANNE GRADY FLORES: No drone assassinations in our name. And today we say, we remember the message of Jesus, which was the message of nonviolence.

AMY GOODMAN: We turn now to look at what will happen when Donald Trump takes over President Obama’s drone war program. Joining us now, Jameel Jaffer, founding director of the Knight First Amendment Institute at Columbia University, previously the deputy legal director at the ACLU. His new book, The Drone Memos: Targeted Killing, Secrecy, and the Law.

So, what foundation has President Obama built that President Trump will inherit?

JAMEEL JAFFER: Yeah, well, when President Obama started escalating the use of armed drones in—early in his first term, you know, he had to build a legal and bureaucratic infrastructure for the use of targeted killing, for the practice of targeted killing. And that infrastructure now exists for the next president, for President Trump, to use. And the real concern is that the lines that the Obama administration drew are lines that can be swept aside by the next administration. These are rules that the Obama administration adopted for itself, and it fought very hard to keep the courts from enforcing those rules or even asking whether the rules were the right ones, whether they reflected international law or reflected constitutional law. And so, in some ways, the Obama administration, I think, was very successful in carving out this authority, this really unchecked authority to use lethal force against suspected enemies. And that power will now be available to President Trump.

AMY GOODMAN: You begin your book, the introduction, “Chekhov’s Drones,” with a very powerful paragraph about what happened in just one period in February of 2016 in a number of different countries. Explain.

JAMEEL JAFFER: Yeah. So, you know, I think that at this point, most Americans don’t even notice the drone campaign. You know, this is something that has faded into the background. But in a period of just a few weeks earlier this year, the Obama administration authorized drone strikes in seven different countries and expanded its authority to use drones or its ability to use drones, armed drones, in Libya. So, this is a—this is a campaign now that extends beyond conventional battlefields. It extends to—not just to Afghanistan and Pakistan and Iraq and Syria, but also Yemen and Somalia and Libya.

AMY GOODMAN: The subtitle of The Drone Memos, Targeted Killing, Secrecy, and the Law. Explain just what these memos are and how you obtained them.

AMY GOODMAN: How difficult they were also to obtain.

JAMEEL JAFFER: Yeah, so these—the memos that are collected in the book include memos that were released only because of litigation. The litigation was brought by the ACLU, in some cases by The New York Times, in some cases by other journalists. And the administration, the Obama administration, fought very hard to keep some of that information secret. And ultimately—you know, in fact, at the beginning, the position that the Obama administration took was that even acknowledging the existence of the drone campaign, exists—acknowledging the CIA’s role in the drone campaign would cause harm to national security. That was a proposition that the courts ultimately rejected. And as a result, some of these memos were released.

AMY GOODMAN: In an interview with the Daily Mail earlier this year, Donald Trumpsaid he would continue Obama’s policy of carrying out drone strikes overseas.

PRESIDENT–ELECT DONALD TRUMP: As far as drones are concerned, yes, to take out terrorists—the only thing is, I want them to get it right. But to take out terrorists, yes, I would—I would think that that is something I would continue to do. As far as beyond that, I don’t want to talk about it, because I do want to be unpredictable, in a sense. I don’t want the enemy to know exactly where I’m coming from.

AMY GOODMAN: So that’s Donald Trump. Explain what most surprised you in these secret documents that you got.

AMY GOODMAN: And then the U.S. administration, President Obama, had assassinated the son of Anwar al-Awlaki, the 16-year-old son—

JAMEEL JAFFER: Yeah. So, there was a strike—

AMY GOODMAN: —who had gone to visit his father.

JAMEEL JAFFER: Right. So, there was a strike in September of 2011 that killed Anwar al-Awlaki and another American citizen, Samir Khan. And then, two weeks later, a strike 400 miles away killed Anwar al-Awlaki’s 16-year-old son. Once again, the Obama administration argued that it shouldn’t be required to explain, to account for its actions to any court. And I think that that is probably the most remarkable claim, I think, that the Obama administration made in this context.

AMY GOODMAN: And how Trump will then use this, President Trump?

AMY GOODMAN: Let me switch gears a little to ask you about some of Donald Trump’s picks for his Cabinet—well, for his national security adviser, Lieutenant General Michael Flynn. Let’s go to a clip of Flynn speaking direct—speaking earlier this year about the threat of Islamism.

MICHAEL FLYNN: We are facing another ism, just like we faced Naziism and fascism and imperialism and communism. This is Islamism. And it is a—it is a vicious cancer inside the body of 1.7 billion people on this planet, and it has to be excised.

AMY GOODMAN: That’s General Flynn, who would be the national security adviser, if approved.

JAMEEL JAFFER: Yeah, I mean, I think that there’s a kind of deep ignorance that is—you know, that is shown there. I hope that’s not reflective of the way that General Flynn will approach this job. You know, that, that is not true. You know, obviously, it’s not true that 1.7 billion Muslims are Islamists. And even of Islamists, it’s ridiculous to say that Islamism is a cancer in that way. You know, I think that one of the things that the Obama administration did that I think was good was abandon the rhetoric of the global war against terrorists, abandon the easy equation of terrorism and Islam. You know, I think that that was not just inaccurate, that equation, but also counterproductive. And it is worrying to see somebody who’s going to have such a high position, such an important position in the national security sphere, articulating views like that.

AMY GOODMAN: And Trump’s nominee for director of central intelligence, of the CIA, Mike Pompeo, said NSA whistleblower Ed Snowden should be given the death penalty.

REP. MIKE POMPEO: It’s absolutely the case that we have not been able to secure all the American information that we needed to and that we’ve had the traitor Edward Snowden steal that information. He should be brought back from Russia and given due process. And I think the proper outcome would be that he would be given a death sentence, for having put friends of mine, friends of yours, who serve in the military today, at enormous risk because of the information he stole and then released to foreign powers.

AMY GOODMAN: So, that’s the man that Donald Trump has chosen to be head of the CIA, Mike Pompeo. You worked with the ACLU, which represents Ed Snowden. Your response?

JAMEEL JAFFER: Yeah, I mean, I see this as reflective, as a kind of broader hostility towards the freedom of the press and the freedom of speech. You know, President Trump—or, you know, during the campaign, Donald Trump ejected reporters from his campaign rallies because of his perceived—you know, his perceptions of their reporting. He ejected protesters from the rallies. You know, he has made the mainstream media into a kind of bogeyman. You know, I—and I see this sort of hostility towards whistleblowers in that—as part of that same pattern. You know, I think that’s all very worrying. I hope that some of the rhetoric that we’ve seen during the campaign and over the last few weeks won’t turn out to reflect the policies of the administration.

AMY GOODMAN: —”Part 2 of that discussion after the show, and we’ll post it online at democracynow.org”:https://www.democracynow.org/2016/12/27/part_2_jameel_jaffer_on_obamas.

Jameel Jaffer founding director of the Knight First Amendment Institute at Columbia University. He was previously the deputy legal director at the ACLU. His new book is titled The Drone Memos: Targeted Killing, Secrecy, and the Law.

The original content of this program is licensed under a Creative Commons Attribution-Noncommercial-No Derivative Works 3.0 United States License. Please attribute legal copies of this work to democracynow.org. Some of the work(s) that this program incorporates, however, may be separately licensed. For further information or additional permissions, contact us.
Donate
By Rise Up TimesPublished On: December 30th, 2016Comments Off on DN! What Will Happen When Donald Trump Takes Over U.S. Drone and Targeted Assassination Program?