AS MORE DETAILS emerge over last week’s killing by Baltimore County police of 23-year-old Korryn Gaines, activists have directed growing anger not only at local law enforcement but also at Facebook, the social media platform where Gaines posted parts of her five-hour standoff with police. 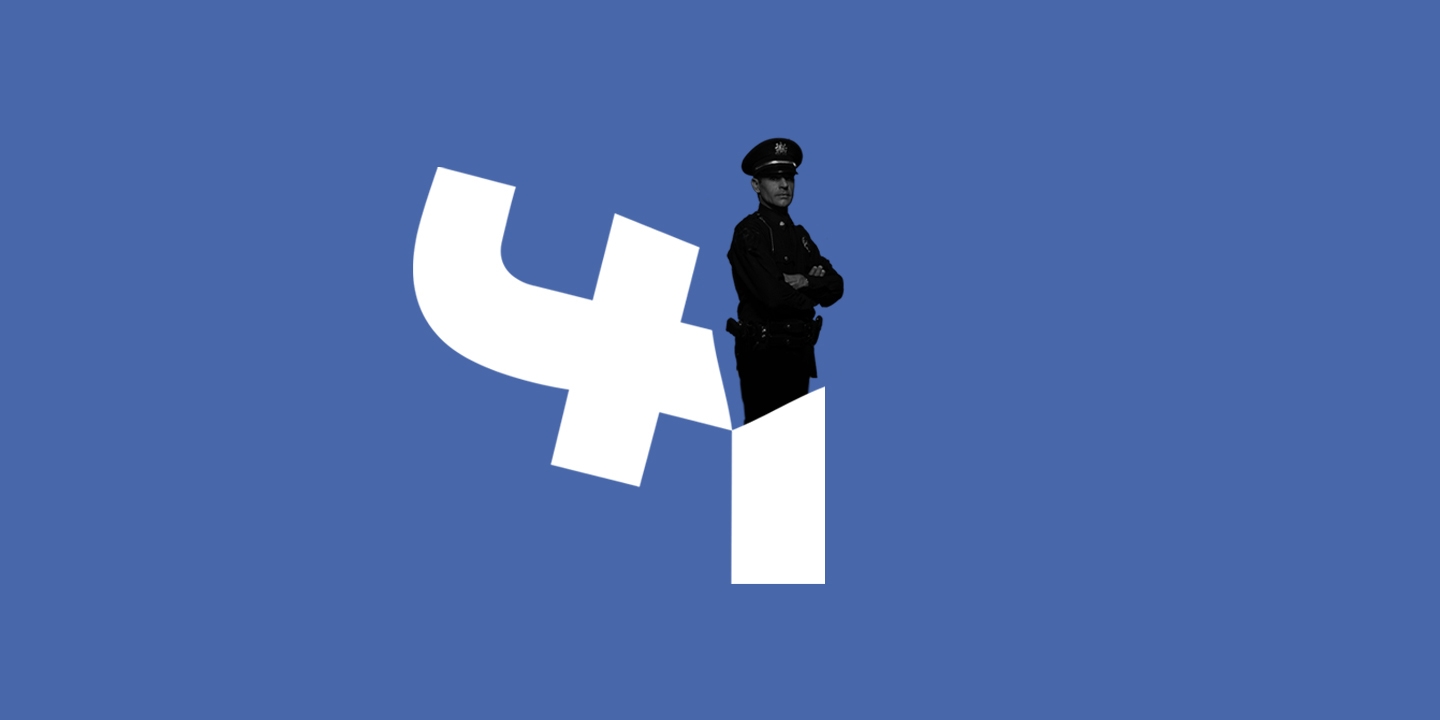 At the request of law enforcement, Facebook deleted Gaines’ account, as well her account on Instagram, which it also owns, during her confrontation with authorities. While many of her videos remain inaccessible, in one, which was re-uploaded to YouTube, an officer can be seen pointing a gun as he peers into a living room from behind a door, while a child’s voice is heard in the background. In another video, which remains on Instagram, Gaines can be heard speaking to her five-year-old son, who’s sitting on the floor wearing red pajamas.

“Who’s outside?” she asks him. “The police,” he replies timidly. “What are they trying to do?” “They trying to kill us.”

Statements made by officials in the days after the incident revealed little-known details of a “law enforcement portal” through which agencies can ask for Facebook’s collaboration in emergencies, a feature of the site that remains mostly obscure to the general public and which has been criticized following Gaines’ death. 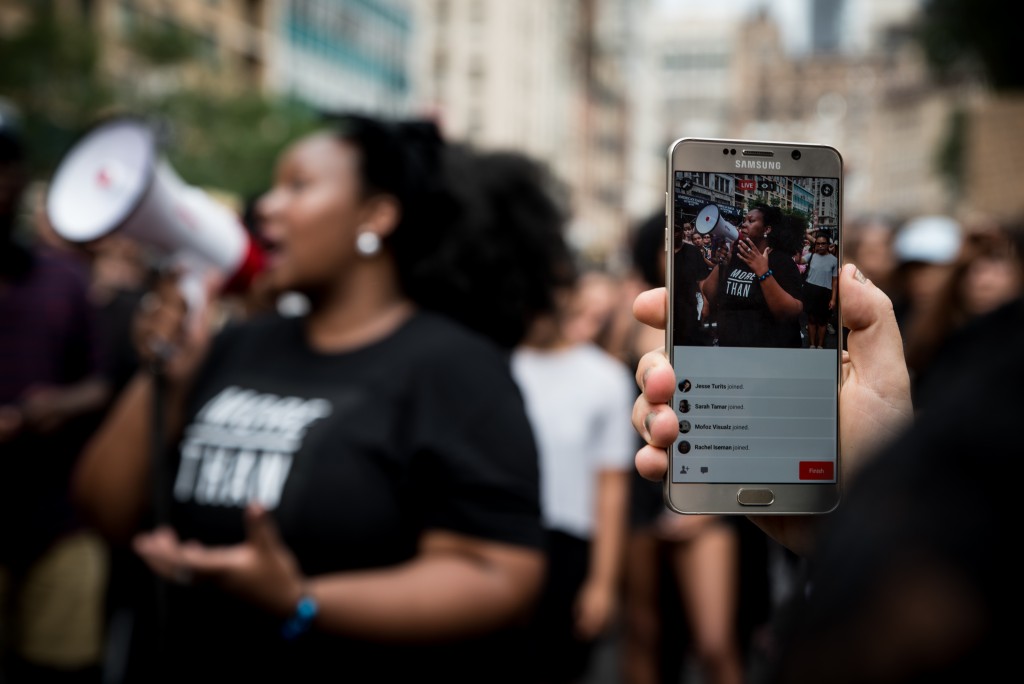 It’s not the first time Facebook has become the stage on which violent encounters between law enforcement and residents play out — and it seems likely more and more such incidents will be documented on the social media hub, given that the company’s livestreaming app, Facebook Live, is only nine months old and spreading at a time when recording police has become an instinctive reflex in some communities. Gaines herself had filmed her interactions with police before, even instructing her son to do the same.But while it’s common for police to ask Facebook to provide them with users’ information, many observers are troubled that the social media giant would take down accounts at the request of law enforcement.

So far, Facebook seems to have struggled with its role at the heart of the national conversation on race and policing. Just last month, the site removed live video posted by the girlfriend of Philando Castile, a 32-year-old African-American man who was shot during a traffic stop in a suburb of St. Paul, Minnesota. Castile’s girlfriend, Diamond Reynolds, started livestreaming and narrating his death seconds after police shot him, garnering nationwide attention. On that occasion, Facebook said the video’s disappearance, which lasted about an hour, was due to a “technical glitch.” It later reinstated the post, with an added graphic-content warning, and the video has since been viewed 5.7 million times.

Then last week, before Gaines was killed, Facebook deactivated her accounts in response to a request by Baltimore County police — drawing criticism that it censored free speech and even accusations that it was complicit in her death. The accounts have since been reinstated, but most of the videos have not.

“Facebook helped Baltimore police kill #KorrynGaines in the dark,” the artist Ferrari Sheppard tweeted, reflecting a sentiment shared by many on social media. “Letting it sink in.”

Nicole Carty, a campaigner with the corporate watchdog group SumOfUs, told The Intercept that “by deactivating Korryn Gaines’ account, Facebook created a really dangerous precedent of censorship by orders of police. … It’s a fundamental threat to civil liberties. Social media and shareable video are instrumental in exposing the epidemic of police violence against black people in the United States.”

“Facebook is acting as a part of the problem,” she added.

Facebook is a private platform — which means that the First Amendment does not constrain what it chooses to censor.

“But there’s no question that constitutional values are not only a good idea but they’re also good for a business’s bottom line when that business is selling a platform for speech,” Lee Rowland, a senior attorney at the American Civil Liberty Union’s Speech, Privacy, and Technology Project, told The Intercept. “There’s a real risk for social media companies if they’re perceived as choosing sides in a public debate; by censoring on the request of law enforcement they run the risk of becoming a propaganda wing of the state.”

On August 1, Baltimore County police officers went to Gaines’ home to serve separate warrants to her and her boyfriend. According to court documents reported by the Baltimore Sun, the attempt quickly escalated:

One officer then “kicked the door forcing the door open” and another entered the apartment and saw the woman, later identified as Gaines, holding a shotgun, the warrant states. She pointed the shotgun at an officer and told them to leave, police wrote in the documents. The officer left and called for backup.

But police weren’t just watching Gaines through her door; they were also following her on social media. 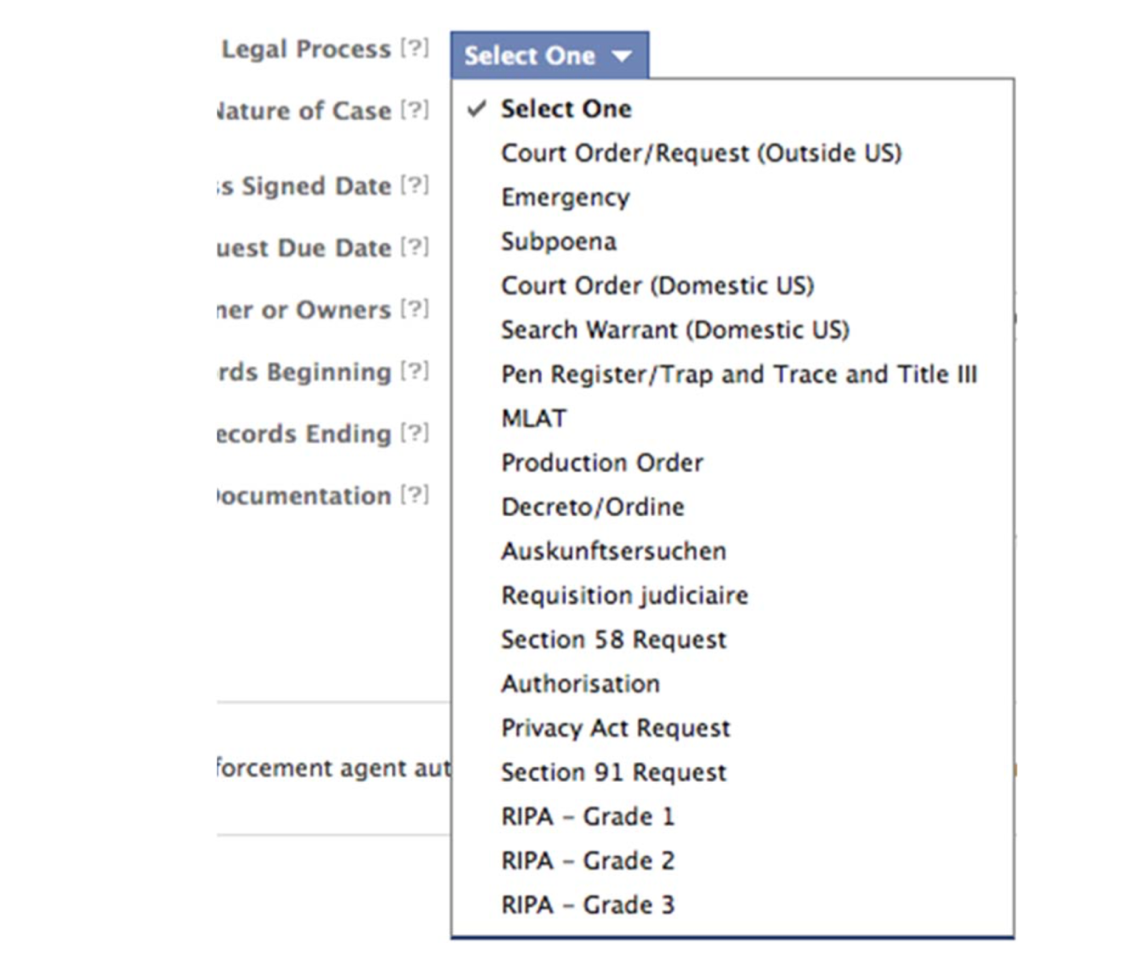 At a press conference the day after her death, Baltimore County Police Chief James Johnson confirmed the department had asked Facebook to deactivate her account while the standoff was still ongoing — “in order to preserve the integrity of the negotiation process,” he said, and for the safety of the officers involved and Gaines’s son, who was in the room with her and was also struck and injured by police fire.“Ms. Gaines was posting video of the operation as it unfolded, and followers were encouraging her not to comply with negotiators’ request that she surrender peacefully,” Johnson said. He added that it took Facebook nearly an hour to deactivate the account after police filed a request through a “law enforcement portal” available on the site to verified agencies.

The department later elaborated in a statement:

The content on Gaines’ social media accounts has not been deleted. BCoPD has filed a request with Facebook to preserve this content as evidence. A search warrant will be obtained to obtain these records.

Law enforcement officials do not have the ability or authority to deactivate social media accounts on their own. Facebook maintains a law enforcement portal through which police request assistance. This portal includes an “exigency” option for emergency situations like the one yesterday. BCoPD applied for the exigency deactivation because of a barricade situation involving an armed subject with a child.Facebook evaluates law enforcement requests and determines what action will be taken.

A Facebook spokesperson confirmed to The Intercept that the company removed the videos, and stressed that they were never Facebook Live streams and that Gaines’ account was back online and “memorialized,” (The company offers a special feature to preserve the accounts of the dead.) The spokesperson said, echoing the claims of the police that Gaines’ followers were encouraging violence, removing the videos was a means of preventing “physical harm or death.” With the videos now removed, this is a difficult claim to analyze.

This spokesperson added that some of the videos were also removed not because they represented an actual clear and present danger to someone’s life, but because they violated the site’s “community standards” against “credible threats of physical harm to individuals.” 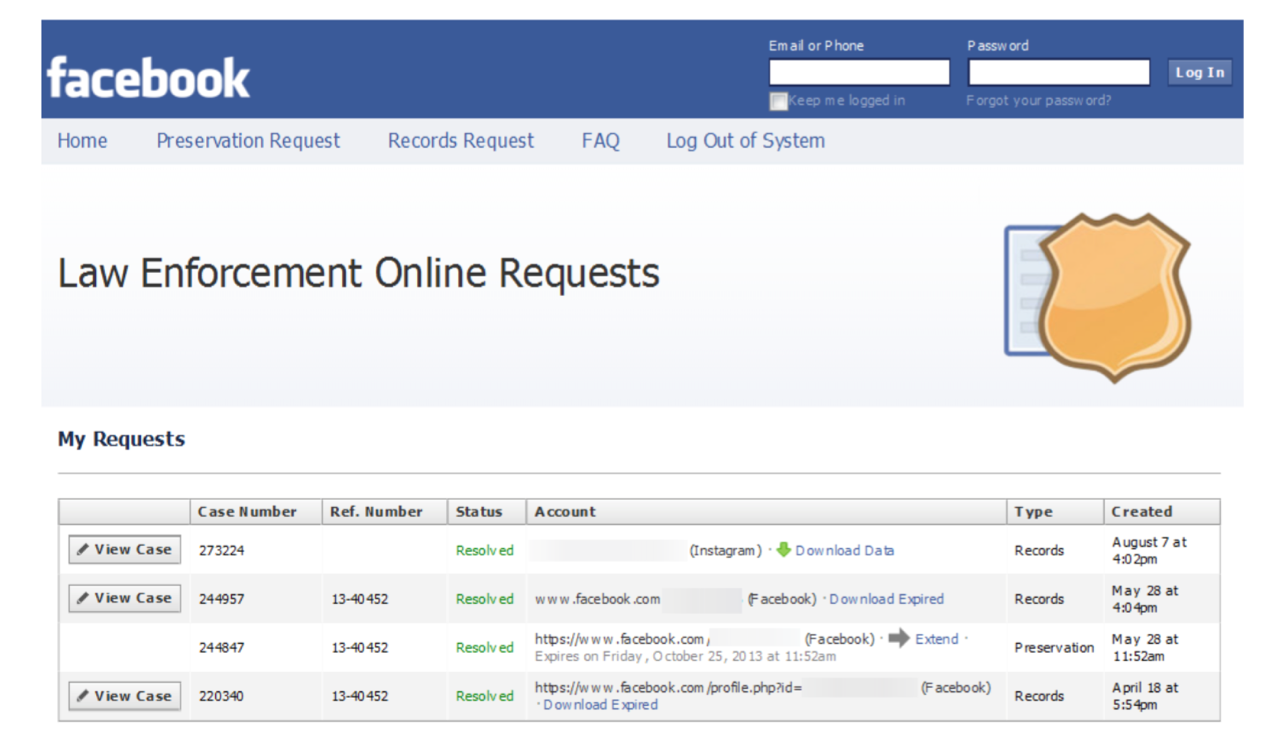 Interestingly, the mechanism through which law enforcement agents request the deletion of Facebook content is the exact same one they use when requesting the disclosure of content: the law enforcement portal. The portal says it is designed for “a law enforcement agent who is authorized to gather evidence in connection with an official investigation.” On the site, officers can write a message to Facebook with links to the profile or content in question, and a description of the situation.Facebook provides ample documentation of how law enforcement agents can, for example, request access to someone’s otherwise private Facebook page for the purposes of an investigation. But these guidelines only describe how police can preserve or access information as evidence — not how they can take it down. The specific emergency action policy cited by the Facebook spokesperson describes only data requests, not deletions:

“In responding to a matter involving imminent harm to a child or risk of death or serious physical injury to any person and requiring disclosure of information without delay, a law enforcement official may submit a request through the Law Enforcement Online Request System at facebook.com/records.”

An “unofficial guide” apparently created by the Sacramento County Sheriff’s Department to help officers navigate Facebook’s portal, and first discovered by The District Sentinel, goes into greater detail about the process — although it also focuses on information disclosure, rather than deletion.

But while it’s no secret that law enforcement is increasingly relying on social media to conduct investigations and build cases, shutting down accounts presents a different set of questions.

Even though Baltimore county is in the process of implementing a new body camera program, none of the officers involved in the standoff were wearing one.

“Visual evidence is powerful and there’s no question that the current movement for police accountability has everything to do with powerful images that have been made public of excessive force by police,” said Rowland. “There’s a particular risk when social media takes down video that may represent the only point of view besides that of law enforcement.”

“In general, social media companies should be very hesitant to comply with law enforcement demands in a manner that might circumvent a citizen’s first amendment right to record interactions with the police,” she added.

Some have called for Facebook to instate a public editor to review users concerns about civil rights issues, and many are demanding greater transparency about how, when, and why Facebook decides to comply with law enforcement’s requests.

“Facebook is increasingly put in a position of power by deciding what the public can see,” said Carty, of SumOfUs. “People don’t want to be in a position where they’re trying to communicate with their networks and people who care about them, and trying to bring accountability to officers acting against them, and then have Facebook turn off the switch. That’s terrifying.”

Following Gaines’ death, the group started an online petition calling on the site to “explain its actions and stop this unacceptable practice immediately,” which has already gained more than 55,000 signatures. “Facebook needs to be accountable and transparent about how it’s making these decisions,” said Carty. “And it needs to put in place policies that protect civil liberties and protect the freedom of information rather than curb it down.” 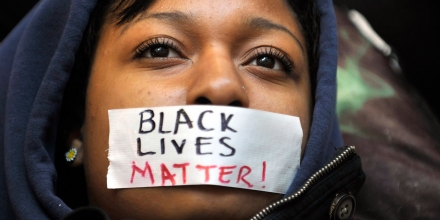 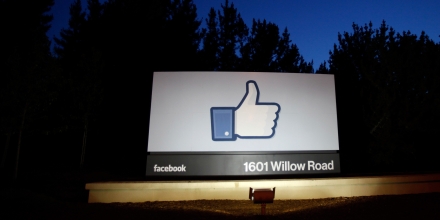 Donate
By Rise Up TimesPublished On: August 8th, 2016Comments Off on Facebook Removed Potential Evidence of Police Brutality Too Readily, Activists Say