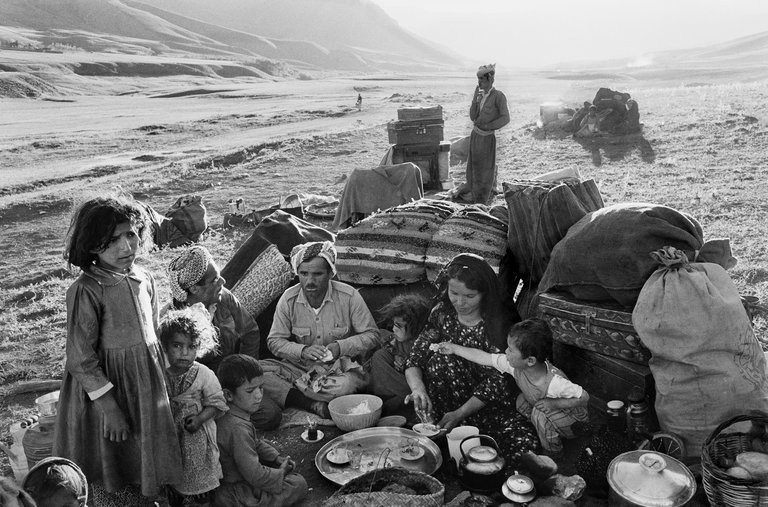 War has driven 30 million children from their homes. These are the stories of three of them.

I have two photos on my desk. The first shows a child, a girl of about 10. She is standing behind an enormous pile of her family’s belongings, which have been tightly packed for a long journey. Her face is blank with uncertainty, but she strikes a bossy pose — one hand on her hip, the other planted firmly against the bundles. Her companions are an older woman, probably her mother, and a little boy — her younger brother? Both look directly at the photographer, Henri Cartier-Bresson, who took this picture in Dessau, as scores of Germans displaced during World War II began returning home. It is 1945. Where has this girl been, and what has she seen?

The second picture, taken in 1974, also shows a girl of about 10. This child is a Kurdish refugee. Her family is sitting with their worldly possessions in a barren field, somewhere near the border with Iran. A meal is underway. The parents sit cross-legged on the ground, intent on their food, while the girl stands, another little girl by her side, and stares into the distance with a wrinkled-brow expression of adult worry. Where is she going?

Young as these girls are, they have already been asked to bear a profound loss. You can see it in their faces. They appear to be only half children, the other half having been matured ahead of schedule by trauma and displacement. They know what they should not. And yet, there is still that other half. They are still kids. Unlike the adults in the frame, who must be constantly aware of their dangerous ordeal, the girls, from time to time, might forget. If the moment was right, they might play a game.

Added by Rise Up Times

That children, even under the worst of circumstances, are able to remain children supplies the world around them with the sense of a future, which is the equivalent of hope. The history of the world is a history of wars — the sieges of Jerusalem, the Mongol conquests, the Mexican Revolution, World Wars I and II, the Taiping Rebellion, the Armenian genocide, the Napoleonic Wars, the Dungan Revolt, the Vietnam War, the Seven Years’ War, the 30 Years’ War, the Roman civil wars, the Chinese Civil War, the American Civil War, the Chilean civil wars, the Liberian civil wars, the Spanish Civil War. These and countless others are usually fought by young adults and overseen by old men, and it is their experiences that historians tend to consider. But children (and their mothers) are present, too. Those who are not killed wind up displaced, surviving in camps and bombed-out villages, where by their mere presence they contribute to the continuance of humankind. Less obvious than the biological fact of this is the psychological one. If there were no children, would the adults of a refugee camp have the will to endure?

With so many wars behind us, so many around us and so many (we must assume) ahead, it begins to seem as if we are wholly dependent on children to provide the world with whatever minimum fuel of promise is required for it to keep turning. The kids have no choice in the matter. They cannot be any other place or any other age. They can only be resilient, miraculously so. Where does this capability come from? Are children able to recover so quickly from adversity because of their inexperience, because they don’t realize quite how bad things really are? Or is it because they have a greater capacity than adults to live entirely in the present, to lose themselves in a game of soccer or tag? Or perhaps resilience is a concept supplied by adults, who would like to believe that children will overcome the terrible experiences we foist upon them.

Much of the research suggests that kids who encounter repeated or sustained trauma and overwhelming stress are likely to suffer outcomes that range from debilitating depression and post-traumatic stress disorder to heart disease and diabetes. Though these children may furnish their ruined cities and shattered families with a little hope, they won’t emerge unscathed. 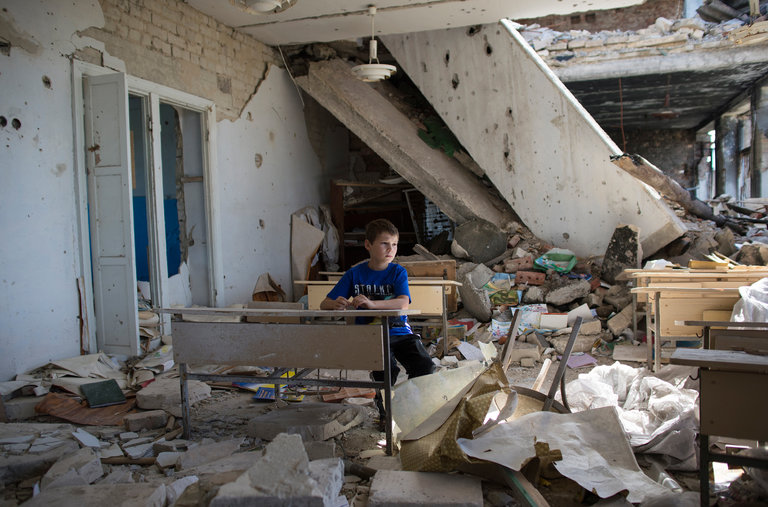 Lynsey Addario for the The New York Times

Think of them, moving silently within the mass migrations and terrified departures, the families running away at night, the human displacements on an unfathomable scale. Aztec children fleeing the armored conquistadors. French Huguenot children crossing the English Channel with their parents. European children streaming east and west and north and south during the First and Second World Wars. Jewish children resettling all over the world. Vietnamese children leaping into boats. Liberian children riding on their parents’ shoulders down roads lined by bodies. Iraqi children running from the gigantic explosions of the gulf war. Generations of Haitian children. Generations of Palestinian children. Generations of Afghan children. See them struggling along, year after year after year, carrying the burden of ensuring our future upon their small backs.

Donate
By Rise Up TimesPublished On: November 8th, 2015Comments Off on NYT | The Displaced: War has driven 30 million children from their homes