What could possibly explain Hamad’s stunning, disgraceful silence about these massacres, abuses, injustices, and extreme levels of avoidable human suffering? 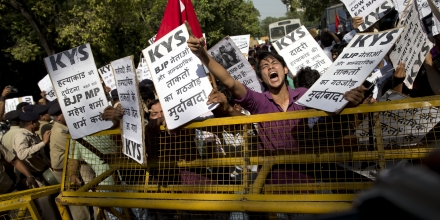 A comprehensive review by The Intercept of the writings of Sam Charles Hamad — author of this Daily Beast article accusing the “global left” of remaining “silent” on abuses by Russia — reveals that he has been completely silent, shockingly and appallingly so, about the following wide array of severe global injustices, never once writing about, let alone condemning, any of this:

What could possibly explain Hamad’s stunning, disgraceful silence about these massacres, abuses, injustices, and extreme levels of avoidable human suffering? One might conclude from his utter silence that he supports these heinous actions. Or perhaps he is an apologist for the perpetrators, seeking to conceal their culpability by never acknowledging these crimes? Or he could just be a propagandist, fixating on certain acts of abuse and violence committed by some regimes while systematically ignoring those of others.

Or could it be that — as a single individual with finite time and energy — he’s capable of focusing only on a relatively small handful of injustices at once, and chooses the ones where he thinks he can have the greatest impact, thus necessarily paying little to no attention to other grave injustices where he thinks he can have little or no effect? Or might it be that he perceives that some injustices receive a great deal of attention in the West (e.g., the Evils of Russia, China and Iran) but that other injustices receive far less attention (those perpetrated by the West and its allies) and thus chooses — as a corrective of sorts — to devote himself to trying to shine much-needed light on the ones that are typically overlooked or ignored entirely?

No, it cannot be that, because — like so many others — he has declared that paying attention to some injustices but not all injustices constitutes “a gruesomely perfect example of … hypocrisy.” So, as he and like-minded advocates have taught us, there must be something pernicious and deeply morally culpable in his silence and the silence of so many like him on this panoply of world horrors.

It’s possible that Hamad has actually condemned all of these terrible abuses and we just didn’t find his denunciations. Why do I say that? Because people like Hamad constantly accuse people like me (who choose to focus on the bad acts of our own government and its allies) of refusing to condemn abuses committed by Russia (“nowhere in any of Greenwald’s output will you find actual recognition of the victims of the Russian strikes and the circumstances that led to their deaths”) even though I’ve done somany times. Or worse, they insinuate that people like Noam Chomsky “actively support” such crimes while ignoring his unequivocal denunciations(“Let’s take [Russian] policy in Syria … Russia is supporting a brutal, vicious government”).

So given how often people like Hamad falsely accuse others of ignoring abuses by Russia through sheer fabrication of their actual record, I’m open to the prospect that he has actually condemned the above abuses and we just didn’t find them. But our research in this regard was quite thorough, and I’ll be happy immediately to note any links he provides where he has written about the abuses in the above list.

Needless to say, the highly selective moral outrage expressed by Sam Charles Hamad is not the point here. The point is the incredibly deceitful, miserably common, intellectually bankrupt tactic that The Daily Beast just aired: smearing people not for what they write, but for what they don’t write. It’s something I encounter literally every day, almost always as an expression of the classic “whataboutism” fallacy — ironically depicted in the West as having been pioneered by Soviet Communists — designed to distract attention from one’s own crimes (OK, fine, we just bombed a hospital in Afghanistan, are constantly droning innocent people to death, and are arming the Saudi slaughter of Yemeni citizens, but look way over there: Why don’t you talk more about Russia????).

And that’s to say nothing of the ignoble history of this tactic in the U.S. — dating back to the height of McCarthyism — of declaring people suspect or morally unhealthy due to a failure to condemn Russia with sufficient vigor and frequency. For decades in the U.S., one could be accused of being a “Kremlin sympathizer” without ever having uttered a syllable of support for Russia, and that’s still just as true today, if not more so. That’s accomplished by a constant measuring of how much one devotes oneself to the supreme loyalty test of publicly denouncing the Ruskies.

This tawdry, self-serving, self-exonerating tactic rests on multiple levels of deceit. “Hypocrisy” always meant “contradicting with words or actions one’s claimed principles and beliefs” (e.g., lecturing the world on freedom and human rights while arming and funding the world’s worst tyrannies). It is now being re-defined to mean: “one who denounces some terrible acts but not all.” If that’s the new standard, it should be applied to everyone, beginning with those who most vocally propound it. As a result, from now on, I’ll be asking the endless number of people who invoke this standard to show me their record of denunciation and activism with regard to the above list of abuses.

Donate
By Rise Up TimesPublished On: October 30th, 2015Comments Off on Glenn Greenwald: Why Is The Daily Beast’s Russia Critic Silent About So Many Hideous Abuses?