The emails also reveal that he ‘consulted a mental health expert’ and that his own security firm had been ‘disingenuous’ to win a contract. The leak is yet another embarrassment for the CIA and comes just days after an anonymous hacker, believed to be a high school ‘stoner’, claimed to have breached Brennan’s personal email account and has posted documents online. 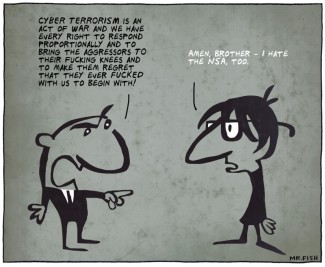 WikiLeaks tweeted a link to a page containing a half-dozen downloadable documents, all arranged under the heading: ‘CIA Director John Brennan emails.’

The first file is Brennan’s Draft SF86 form which asks him to supply his passport number, home address, phone number and other personal details – including his weight and height.

Brennan was seeking a security clearance while applying for a job as White House counterterrorism adviser.

It was not immediately clear whether any national security information was compromised in the release of the clearance application, which includes his wife’s Social Security number and the names of people Brennan worked with over his long prior career at the CIA.

The documents all date from before 2009, when Brennan joined the White House staff; before that, he was working in the private sector.

Brennan took a swipe at former President George W. Bush (pictured in 2001) for his ‘gratuitous’ labeling of Iran as part of a worldwide ‘axis of evil’

One includes a summary of a contract dispute between the CIA and Brennan’s private company, the Analysis Corporation (TAC), which had filed a formal protest after losing a contract dealing with terrorist watch lists.

According to RT the CIA snubbed its bid for a project and classed its proposals as presenting a ‘medium high’ risk. The website says the CIA criticized TAC for ‘disingenuous’ behavior.

Elsewhere, in a 2007 draft position paper on the future of intelligence in which he calls for the ‘need to set the appropriate balance between conducting domestic intelligence operations and protecting the privacy rights and liberties of U.S. persons’.

He adds: ‘The FBI, Department of Homeland Security, National Security Agency, CIA, and Department of Defense are all engaged in intelligence activities on U.S. soil, and these activities must be consistent with our laws and reflect the democratic principles and values of our Nation.’

In a post-election memo, purportedly written to Obama, Brennan also laid out a roadmap on dealings with Iran.

His suggestions are similar to the carrot-and-stick approach the administration would eventually use in nudging Tehran toward joining negotiations over slowing the momentum of its growing nuclear reactor program.

‘The United States has no choice but to find ways to coexist — and to come to terms — with whatever government holds power in Tehran,’ Brennan said in the three-page memo.

He added that Iran would have to ‘come to terms’ with the U.S. and that ‘Tehran’s ability to advance its political and economic interests rests on a non-hostile relationship with the United States and the West.’

In a post-election memo, purportedly written to Obama (pictured on Wednesday at an anti-drug event in Charleston, West Virginia), Brennan also laid out a roadmap on dealings with Iran

In the memo, Brennan advised Obama to ‘tone down’ rhetoric with Iran, and swiped at former President George W. Bush for his ‘gratuitous’ labeling of Iran as part of a worldwide ‘axis of evil.’

Although he didn’t specifically call for the regime of financial sanctions that the Obama administration, along with Europe, Russia and China, pushed against Iran, Brennan told the president-elect to ‘hold out meaningful carrots as well as sticks.’

In separate files, a 2008 letter from then-Senator Kit Bond to colleagues describes Bond’s proposal to curb CIA interrogation techniques in a less restrictive way than requiring the agency to adhere to the Army field manual, which was what Obama ultimately did.

A related document appears to be legislation reflecting Bond’s proposal, which would have prohibited the agency from engaging in interrogation techniques prohibited by the Army field manual, rather than restricting it to only those techniques allowed by the manual.

Instead of listing all allowed methods under the Geneva Convention, Bond wrote on May 7, 2008, every kind of interrogation should be considered compliant, as long as it is not explicitly forbidden by the Army Field Manual.

‘In this way, the congress can state clearly that certain harsh interrogation techniques will not be permissible,’ the letter stated.’ At the same time, this approach allows for the possibility that new techniques that are not explicitly authorized in the AFM, but nevertheless comply with the law, may be developed in the future.’

In one PDF titled ‘Torture’ there was a letter from Vice Chairman Christopher Bond, Vice Chairman of the Senate Select Committee on Intelligence, to his fellow board members with a proposal on how to make future interrogation methods ‘compliant’ and ‘legal’.

Leaked: The emails, obtained by Wikileaks, show that John Brennan had concerns about the US spying on its own citizens

A CIA statement called the postings a ‘crime.’

‘The Brennan family is the victim,” the agency said in an unattributed statement.

‘This attack is something that could happen to anyone and should be condemned, not promoted. There is no indication that any the documents released thus far are classified.

‘In fact, they appear to be documents that a private citizen with national security interests and expertise would be expected to possess.’

It is unclear at this time if WikiLeaks’ Wednesday announcement is linked to the earlier hacking incident targeting the US intelligence chief.

The hacker spoke to the New York Post, which described him in an article Sunday as ‘a stoner high school student,’ motivated by his opposition to US foreign policy and support for Palestinians.

The Post said he didn’t reveal his name or where he lived.

The hacker, who described himself to CNN as an American younger than 22 years, also claimed to have breached a Comcast account belonging to Homeland Security Secretary Jeh Johnson, and released what appeared to be personal information.

One document purporting to come from Brennan’s AOL email account contains a spreadsheet of people, including senior intelligence officials, along with their Social Security numbers, although the hacker redacted the numbers in the version he posted on Twitter.

CISA’s Privacy Safeguard Can Be Overruled By The FBI, NSA, Or Any Federal Agency

Donate
By Rise Up TimesPublished On: October 24th, 2015Comments Off on Leaked Emails From CIA Head Reveal He Suggested US Spying On Own Citizens May Be Illegal