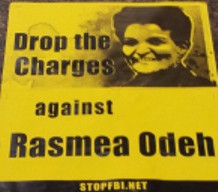 Stand with Rasmea and fill the appeals courthouse in Cincinnati!

We are organizing a support rally in front of the courthouse at
8 AM EST on Wednesday, October 14, 2015, and then will fill the courtroom immediately, as Rasmea’s defense and the prosecution each present their oral arguments to a three-judge panel.

The outrageous arrest, trial, and sentencing of Rasmea Odeh is a political attack on Arab Americans and Palestinians, on Muslims, and on anti-war and international solidarity activists. While the charges being appealed deal with minor problems on her immigration application, the truth is this is a political trial about U.S. Empire. The U.S. government is acting viciously, spending millions of tax dollars targeting a victim of Israeli military torture.

Despite the unfairness, with you we can continue to beat back this political attack, and prevent an icon of the Palestinian freedom struggle from going to prison or being deported.

Living in Chicago for 20 years now, Rasmea Odeh is surrounded by friends, family and community. For her work serving Arab American women and their families in need, she won many awards and public recognition. The U.S. government began targeting Rasmea Odeh after the FBI raids and grand jury investigation on the Antiwar 23!

Angela Davis, who recently spoke to 500 people at a Chicago rally, said in her solidarity statement, “As a person with first-hand knowledge of the devastation wrought by politically motivated prosecutions — during the era of COINTELPRO, I was falsely charged with three capital offenses — I see Rasmea Odeh’s case as a continuation of the embarrassing history of decades of suppression of social justice activists in the U.S.”

If you care about peace and justice, if you oppose political repression, then you need to act. If you support Boycott, Divest, and Sanctions that target the U.S. government and corporations propping up Israel Apartheid, then this is for you! You can join the Week of Justice for Rasmea and help overturn this judicial travesty by the U.S. government.

The Rasmea Defense Committee contends that Judge Gershwin Drain did not allow for a full and fair trial, and believes that is why Rasmea was convicted and sentenced to 18 months in prison and deportation.  We are confident that she has solid arguments on appeal, and wrote in late July that the “defense argues conclusively that the government ‘never really addresses the basic constitutional deprivations asserted in Ms. Odeh’s opening appellate brief,’ and that Rasmea is ‘entitled to present her complete defense to the jury,’ which can only happen in a new trial.”

After the oral arguments are heard by three appellate judges on October 14, a decision will be made between two and six months later.  If the court agrees with the defense and overturns the conviction and the sentencing, the case gets sent back to the prosecution to possibly refile charges, whereupon the entire trial process begins anew.  But this time, evidence of torture, Post-Traumatic Stress Disorder (PTSD), etc., would be allowed into the courtroom.

If the court upholds the conviction but disagrees with the sentence, the appellate judges send new sentencing guidelines back to Drain for re-sentencing.  In the worst possible scenario, her conviction and sentencing would be upheld, meaning that she would have to serve 18 months in prison and then be deported.  If this happens, the defense could ask that all of the 6th Circuit appellate court judges, not just the three panelists, review the case as a last ditch effort to win the appeal.

There is still much more organizing to be done!

As her defense attorneys have said since the beginning of this ordeal, “You [Rasmea’s supporters] provide public testimony when you rally outside the courthouse and then file in to fill the courtroom.  Public testimony of not only the power of Rasmea’s positive influence on her friends and colleagues, and the people she organizes, but public testimony also of the fact that she did not receive a fair trial and that there are people who are going to hold the system—prosecutors and judges—accountable.

Register here to join us in Cincinnati on October 14, visit www.justice4rasmea.org for more information, and / or email justice4rasmea@uspcn.org with any questions.

We have been doing non-stop fundraising, organizing public events, and telling Rasmea’s story to media across the country and the world.

Over 100 people joined Rasmea Odeh during her trial on trumped up political charges last year, and after being convicted, again during her sentencing earlier this year. She still needs us one more time in Cincinnati for her appeal on October 14th, so the Rasmea Defense Committee is asking for your financial commitment.

We need to raise $5,000 for two charter buses and other transportation expenses to get 110 of Rasmea’s closest supporters to Ohio for the appeal.

Crowdfund & GET ON THE BUS from Chicago for Rasmea’s appeal!

Fill out this form if you’re in Chicago and want to ride with us!

Those who are driving their own cars and can take others, or would like to carpool, should contact Joe Iosbaker (joeiosbaker@gmail.com) as soon as possible.

The national Rasmea Defense Committee is led by United States Palestinian Community Network (USPCN),Committee to Stop FBI Repression (CSFR), and Coalition to Protect People’s Rights (CPPR) and endorsed by many other organizations.

← Evergreene Digest: Wars, Refugees And The Complete Lack Of Leadership Everywhere
Video | Snowden to Iowa City Audience: What are we going to do about it? →