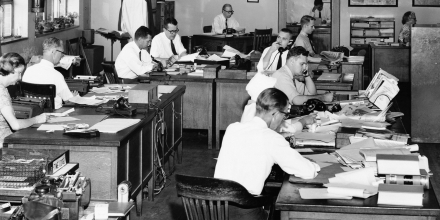 In the early 1990s, my father had an outlook-altering experience. A life-long South Florida accountant for individuals and small businesses, he had no involvement in politics and harbored a basic patriotic trust for American institutions, including its media — the type of uncritical faith we’re taught to have and easily adopt if we’re not paying close attention. But then one of his accounting clients, a manager of a Native American casino, ended up in a public business dispute with the tribe that owned it, and the local media extensively covered the dispute.

Because he had much first-hand knowledge of the controversy, he was able to see how many misleading claims and outright factual falsehoods were regularly stated as fact by the media covering that story. And he was both shocked and outraged by it. For the first time, he viscerally understood how easily and often false claims are circulated by respectable media outlets — whether due to laziness or gullibility or manipulation or malice or the difficulty of understanding complex events. And that personal realization made him much more skeptical in general about what media outlets told him and much more critical in how he assessed and processed it.

I was reminded of all this by a self-reflective, three-tweet observation from Hamilton Nolan of Gawker, which has been the subject of extensive media coverage over the last several weeks:

I can’t overstate how much I empathize with these sentiments. For the past decade, I’ve been writing critically about the American media, usually with a focus on the specific policy and legal topics I know best. So like most politically engaged people, I’ve long been rationally aware of how frequently deceitful and inaccurate claims are passed off by the most respected media outlets as fact, using highly authoritative tones. By itself, the Iraq War should have taught all of us that (though I regard the repeated attempt by ABC News to blame Iraq for the anthrax attack as a perhaps even more extreme example).

Still, nothing drives home that point viscerally like being personally involved in matters the media is reporting and thus having first-hand knowledge of what is being claimed. Over the past two years, there’s been extensive media coverage and public discussion of both the Snowden story and the building of First Look Media/The Intercept, in which I’ve been very personally involved. So much of what has been said and still gets said about those things — not just by random online commenters and conspiracy-mongers but by the largest and most influential media outlets — is just plainly wrong: not “wrong” in the sense of resting on unpersuasive opinions or even casting a misleading picture, but “wrong” in the sense of being factually, demonstrably false.

It’s so frequent, so common, that it’s impossible even to note all or even most of the falsehoods because one would never do anything else. And even if one devoted oneself to that task, many of the falsehoods would continue to thrive because of our reflexive assumption that what we read from respectable media outlets is true even if unaccompanied by evidence, and because most people lack the time and inclination to independently verify what they’re told about matters in which they have no personal stake.

But it’s a monumentally important experience for any journalist to have. It teaches a crucial lesson: It’s simultaneously humbling about the limits of one’s ability to fully understand complicated situations about which one has no first-hand knowledge, and illuminating about the inherent subjectivity with which we all view everything. After I briefly made this observation on Twitter in response to Nolan’s tweets, former Reuters editor-in-chief David Schlesinger wrote this: 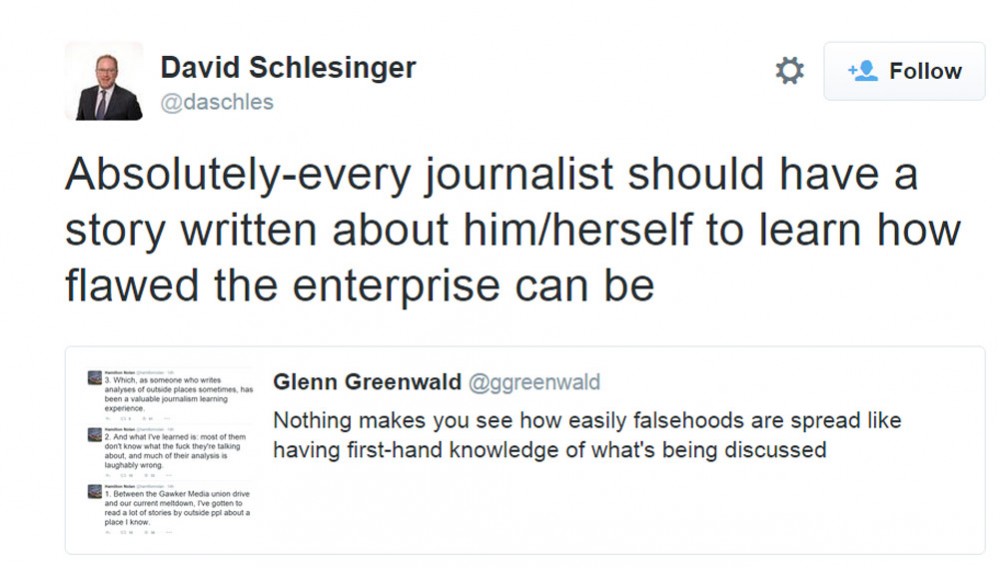 Indeed. But that realization is equally vital for consumers of journalism. Journalistic objectivity is a sham, a horribly misleading and self-flattering conceit. Don’t simply trust claims made in authoritative media tones — even if, perhaps especially if, journalists work for the most influential media outlets — unless they point to evidence that confirms or at least suggests their truth. And when consuming journalism products, always consciously realize that, even when malice or other forms of bad faith are nonexistent, so much of what is said and claimed by journalists is simply untrue. Again, that’s an easy and seemingly obvious proposition to embrace in the abstract — few people would say they disagree with this — but as Nolan’s tweets show, its visceral truth becomes most apparent from personal experience.

Donate
By Rise Up TimesPublished On: August 3rd, 2015Comments Off on Glenn Greenwald: A Crucial Realization About Journalism is Learned by Being its Subject