If you want to see the American people just go join a peace walk and the public will drive right by…. people of all ages, colors, income levels.  The highway is still the one place you can have face-to-face contact with the non-choir. 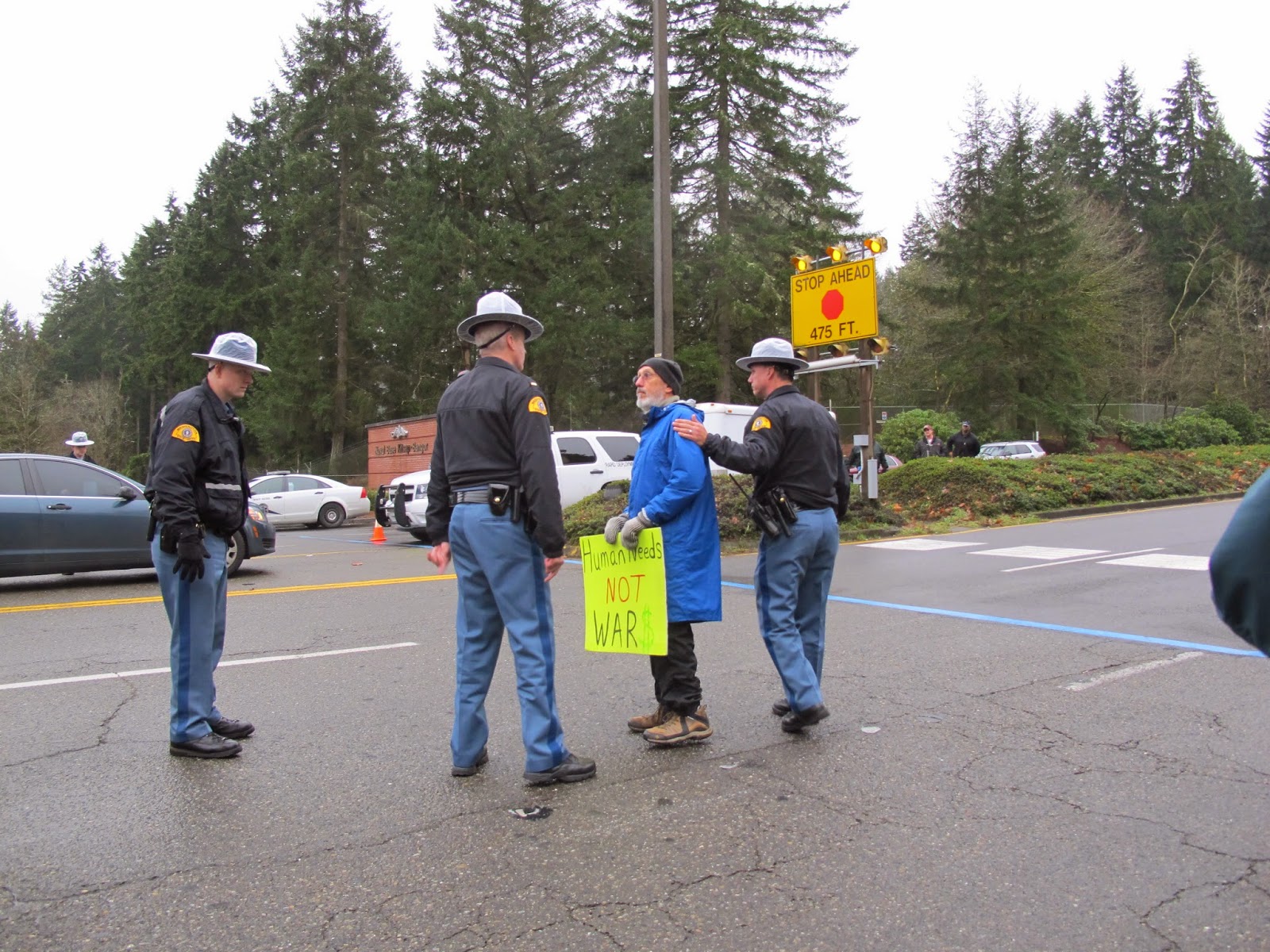 Yesterday [Saturday, January 17, 2015] about 60 people gathered at Ground Zero Peace Center for a five-hour meeting that included speakers and music.  I talked during the event about the program of the Global Network and my participation in the MLK peace walk through Washington state.  Following the meeting the folks broke up into small groups and I joined the one that was planning the civil disobedience action at the front gate of the Bangor Trident nuclear submarine base.

The submarine base is less than one mile down the two-lane country road from the peace center.  We walked in single file through the rain to the base and then had a moving ceremony that was highlighted by several women in black robes holding candles in front of a coffin that contained the earth.  Gregorian chants were played on a sound system as the state police and base security (one with sentry dog and machine gun) lined up to block any attempts to cross the ‘forbidden line’ toward the base.

After some time the casket was carried into the roadway that leads into the base and people were immediately detained by the police. A second group entered the roadway and then I was the last to step beyond the forbidden line into the road and I kneeled down and initially refused to move.  One tall state policeman ordered me to move and as I looked into his eyes I noticed that he was quite unsure of himself in that moment.  I eventually stood up and was moved to the middle of the four-lane base highway and like the nine others was ticketed on the spot for ‘unlawfully’ being on the highway.  A fine of $56 was handed to me for my brief moment of civil disobedience.

This morning I did a half-hour radio interview on KEXP radio (Mike McCormick show). I’ve been on the show once before some years ago.

I head home early in the morning. It’s been a great visit to the Seattle area and I thank Nipponzan Myohoji for the great peace walk experience.

If you want to see the American people just go join a peace walk and the public will drive right by…. people of all ages, colors, income levels.  The highway is still the one place you can have face-to-face contact with the non-choir.

It was fitting to be part of this symbolic action at the front gate of the Navy base after walking so far through the region.  The Navy (which recently acknowledged that their ship building budget is ‘unsustainable’) wants even more of the nation’s treasury for aircraft carriers, nuclear subs, and destroyers that are all far over budget.  The only way to pay for them is to further decimate social spending across the land.  The 15 new incoming Republican senators in Washington have pledged to dismantle the food stamp program and attempts are presently being made to destroy Social Security, Medicare and Medicaid.

For me this peace walk was a living prayer and cry out to the public to defend these programs against the agents of doom who now run the US government.

From the Editor: A little bit about the Bangor Naval Base

A Trident nuclear submarine sitting in Puget Sound near Sequim in 2006 is one of eight in the Pacific fleet, stationed at Naval Base Kitsap Bangor. The Navy says having a second wharf to load and unload weapons at the base is crucial to national security.

The Cold War ended in 1991. But you might not know it to look at Naval Base Kitsap Bangor.

The base’s eight nuclear submarines typically sail on patrol three times a year for up to 100 days at a stretch, much as they did before the Soviet Union disintegrated.

Three of those submarines might be on alert at any given time, and the entire fleet carries enough nuclear warheads on its Trident missiles to obliterate every major city in Russia and China.

Donate
By Rise Up TimesPublished On: January 18th, 2015Comments Off on Action at Bangor Naval Base: Defending Social Progress from the Agents of Doom