I am sending this article on behalf of Patrick Kennelly who is representing Voices for Creative Nonviolence in Kabul.      —Kathy Kelly

The year 2014 marks the deadliest year in Afghanistan for civilians, fighters, and foreigners. The situation has reached a new low as the myth of the Afghan state continues. Thirteen years into America’s longest war, the international community argues that Afghanistan is growing stronger, despite nearly all indicators suggesting otherwise.

RiseUpTimes.org is a purely volunteer effort to counter mainstream corporate media that beat the drums of war. Rise Up Times covers other justice and peace issues as well, and there are many in these Rise Up Times. I would like to continue to bring you the same quality articles, news, commentary, and perspectives  that you have come to expect, and that is why I am asking for your help.  Click here for some ways to help Rise Up Times continue to bring you an alternative to the mainstream corporate media.   —Sue Ann Martinson, Editor

Most recently, the central government failed (again) to conduct fair and organized elections or demonstrate their sovereignty. Instead, John Kerry flew into the country and arranged new national leadership. The cameras rolled and a unity government was declared.  Foreign leaders meeting in London decided on new aid packages and financing for the nascent ‘unity government.’ Within days, the United Nations helped broker a deal to keep foreign forces in the country, while simultaneously President Obama declared the war was ending—even as he increased the number of troops on the ground. In Afghanistan, President Ghani dissolved the cabinet and many people are speculating the 2015 parliamentary elections will be postponed.

RiseUpTimes.org is a purely volunteer effort to counter mainstream corporate media that beat the drums of war. Rise Up Times covers other justice and peace issues as well, and there are many in these Rise Up Times. I would like to continue to bring you the same quality articles, news, commentary, and perspectives in RiseUpTimes that you have come to expect, and that is why I am asking for your help.  Click here for some ways  to help Rise Up Times continue to bring you an alternative to the mainstream corporate media.

The Taliban and other insurgent groups continue to gain traction and have pulled increasing parts of the country under their control. Throughout the provinces, and even in some of the major cities, the Taliban have begun collecting taxes and are working to secure key roadways. Kabul—a city that has been called the most fortified city on earth—has been on edge due to multiple suicide bombings. The attacks on various targets, ranging from high schools to houses for foreign workers, the military, and even the office of Kabul’s police chief have clearly communicated the ability of anti-government forces to strike at will. In response to the growing crisis, the Emergency Hospital in Kabul has been forced to stop treating non-trauma patients in order continue to treat the growing number of people harmed by guns, bombs, suicide explosions, and mines.

After four years of traveling to Afghanistan to conduct interviews, I have heard ordinary Afghans whisper about Afghanistan as a failing state, even as the media has touted growth, development, and democracy. Using dark humor to comment on current conditions Afghans joke that everything is working as it should; they acknowledge an unspeakable reality. They point out that more than 101,000 foreign forces trained to fight and use violence who have used their training well—by using violence; that arms merchants have ensured that all parties can continue fighting for years to come by supplying weapons to all sides; that foreign funders backing resistance groups and mercenaries can complete their missions—resulting in both increased violence and an absence of accountability; that the international NGO community implements programs and has profited from over $100 billion in aid; and that the majority of those investments ended up deposited  in foreign bank accounts, primarily benefiting  foreigners and a few elite Afghans.

Further, many of the supposedly “impartial” international bodies, as well as some of the major NGOs, have aligned themselves with various fighting forces. Thus even basic humanitarian aid has become militarized and politicized. For the ordinary Afghan the reality is clear. Thirteen years of investing in militarization and liberalization has left the country in the hands of foreign powers, ineffective NGOs, and infighting between many of the same warlords and Taliban. The result is the current unstable, deteriorating situation rather than a sovereign state.

Yet, during my trips to Afghanistan, I have also heard another unspeakable whispered, in contrast to the narrative told by mainstream media. That is, that there is another possibility, that the old way has not worked, and it is time for change; that nonviolence may resolve some of the challenges facing the country. In Kabul, the Border Free Center—a community center in which young people can explore their role in improving society—is exploring the use of nonviolence to engage in serious attempts at peacemaking, peacekeeping, and peacebuilding. These young adults are engaging in demonstration projects to show how different ethnic groups can work and live together. They are creating alternative economies that do not rely on violence in order to provide livelihoods for all Afghans, especially vulnerable widows and children. They are educating street children and developing plans to decrease weapons in the country. They are working to preserve the environment and to create model organic farms to show how to heal the land. Their work is demonstrating the unspeakable in Afghanistan—that when people engage in the work of peace, real progress can be achieved.

Perhaps if the last 13 years had been less focused on foreign political motives and military aid and more focused on initiatives like the Border Free Center, the situation in Afghanistan might be different. If energies were focused on peacemaking, peacekeeping, and peacebuilding, perhaps people could acknowledge the reality of the situation and create a true transformation of the Afghan state.

Pat Kennelly is the Director of the Marquette University Center for Peacemaking and works with Voices for Creative Nonviolence. He writes from Kabul, Afghanistan and can be contacted at kennellyp@gmail.com

The Duvet (or quilt) project was showcased in a previous Rise Up Times post. Here are the results for this year. 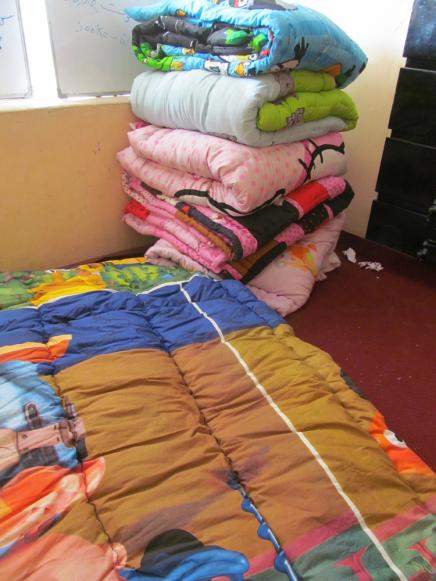 Donate
By Rise Up TimesPublished On: December 23rd, 2014Comments Off on Patrick Kennelly: The Unspeakable in Afghanistan