When world leaders gathered at a preliminary meeting on climate change at the UN headquarters in New York, and one day after hundreds of thousands (estimates range from 311,000 to 400,000) people marched in the Climate Convergence, there was a coordinated effort to demand accountability for the corporate and business interests responsible for the climate crisis with an action called Flood Wall Street. [Editor’s Note: 1000 were expected but almost 3000 joined the action.]

They were not going to be able to literally seize control of the U.S. and global economic system by flooding into New York’s financial district that would predictably be heavily protected and guarded by police and barricades—nor did they expect to. The dedicated and passionate marchers were also peaceful and unarmed (no pitchforks in evidence), and those protesters who planned to get arrested had been trained in nonviolent civil disobedience.

But the intent was to shake things up by shutting down the street and focusing attention on the root cause of the climate crisis—the rapacious economic system that places profit over people and planet. This is expressed urgently in the slogan: People demand system change, not climate change. 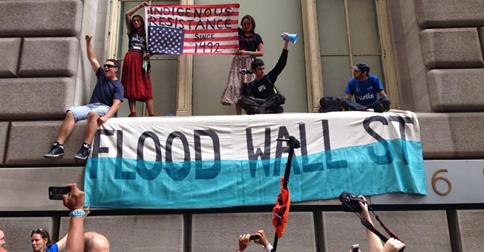 The people assembled were dressed in blue to symbolize a flood of water that is engulfing the world due to climate destruction (and will even literally drown New York City and Wall Street as the climate crisis continues). But in a double entendre, the color blue also symbolized hope in the literal flood of people demanding change from a destructive economic system.

So we gathered here at Battery Park at the lower edge of Manhattan, adjacent to New York’s financial district. There were speeches by representatives of indigenous groups who are on the front lines bearing the brunt of environmental degradation and destruction, and North Americans who feel a duty as hold their own region accountable.

The Occupy Wall Street human mic echoed with messages for the crowd. The people assembled were of all ages from very young children accompanied by parents to white-haired elders and many of the ages in between, including a large number of youth. Then the flood of blue began to march out of the park toward Wall Street’s financial district chanting:

“The people are going to rise like water/we’re going to calm this crisis down/I hear the voice of my great grand-daughter saying “Shut down Wall Street now!!”

We streamed onto Broadway carrying blue banners and accompanied by a giant Carbon bubble balloons past the iconic statue of the bull in New York’s financial district to Wall Street. Barricades placed by police on both sides of the street funneled people through the the street and blocked off the end of Broadway where it intersected with Wall Street, preventing anyone from actually entering our destination: Wall Street. Since no one could get any further, people sat down around the bull statue and throughout the street, successfully blocking that part of Broadway.

Indigenous people, especially indigenous women, were especially spirited among the demonstrators. A couple of courageous young Native American women and men climbed onto a high ledge above the street and held a banner reading, “Honor Mother Earth” and an upside flag. From time to time chants and songs rose up from the crowd, and an occasional cheer such as when former Green Party V.P. candidate (on Ralph Nadar’s ticket), Native American activist, and environmental economist Winona LaDuke arrived. [Editor’s Note: Winona LaDuke with Honor the Earth is currently opposing the Sandpiper pipeline. Click here for more information.]

At 4:00 p.m. when the bell rings to announce the closing of trading (our futures) on the New York Stock Exchange, arrests were thought to be imminent. But it didn’t happen. People moved down the street closer to the intersection of Broadway and Wall Street where they were blocked from going further. You could see the sign: Wall Street, but continued to be unable to get beyond it. Eventually police began to assemble in formation with white plastic handcuffs. Activists released a blue powder to symbolize the flood. 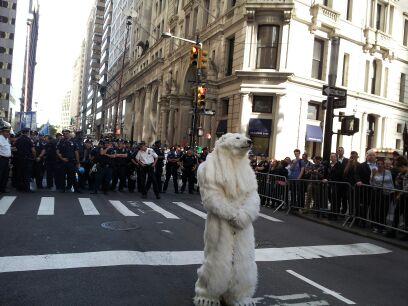 Many alternative news organizations would not miss this story, but it also seemed as though every major news organization was televising: aside from ABC, NBC, CBS, there was Univision, APF, Al Jazeera, among others. A new friend of the day, a wonderful young woman named Gabriela, who was radiant with enthusiasm at participating in an event that she hoped would bring change, was interviewed earlier in the day by the New York Times.

I did not see it but heard that police had used some pepper spray on a few people—who may have tried to open the barricades, or just happened to be in the right place at the right time. Tear gas was released several times, but there was a wind that blew much of it away (I did get a irritating whiff of that). By evening 104 people were arrested, including a polar bear.

The flood of energy and enthusiasm inspired hope in the power of people to effect change before it’s too late. They will be back—if not literally on Wall Street, somewhere, everywhere—knowing that the earth and our survival, itself, depends on it.

Mary Beaudoin is a member of Women Against Military Madness (WAMM) and the editor of the WAMM Newsletter. She has worked tirelessly against war and also has worked against racial violence for many years. She attended and participated in the People’s Convergence Climate March in New York City on September 21, 2014 and also in the Flood Wall Street action on September 22, 2014.

← ▶ Hedges, McKibben, Naomi Klein, Sawant, Sanders: What Will It Take to Save Humanity and the Planet?
Henry A. Giroux; ISIS and the Spectacle of Terrorism—Resisting Mainstream Workstations of Fear →