Adam Gabbatt speaks to demonstrators at the Flood Wall Street march
Click here to see the original article and a brief video.

Dozens of protesters were arrested after hundreds of people gathered in New York City’s financial district on Monday to denounce to denounce what organisers say is Wall Street’s contribution to climate change.
Flood Wall Street demonstrators, primarily dressed in blue to represent climate change-induced flooding, marched to New York City’s financial centre to “highlight the role of Wall Street in fuelling the climate crisis,” according to organisers. 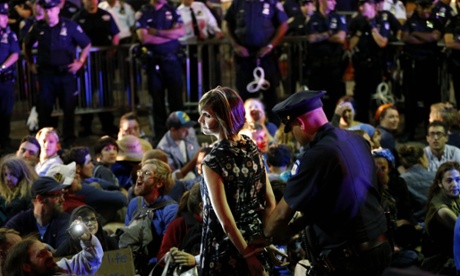 A protester is cuffed on Wall Street on Monday. Photograph: Seth Wenig/AP

While the day started off peacefully, demonstrators began trying to push back metal barricades when trading closed on the New York Stock Exchange at 4pm.
Police used pepper spray to push them back and later broke up the gathering. A core group of a few dozen activists staged a sit-in steps away from Wall Street, and police officers handcuffed and walked them away one-by-one, taking them to police vans parked nearby.
Earlier in the day, police had arrested three protesters. An New York police department representative could not give an exact tally of how many protesters had been held.
The demonstration comes a day ahead of the United Nations climate summit and follows Sunday’s People’s Climate March – which saw what organisers estimated was 310,000 people marching in New York City, and tens of thousands of others in 150 countries across the world, demonstrating in an effort to put pressure on world leaders to act now to slow the damaging effects of climate change. 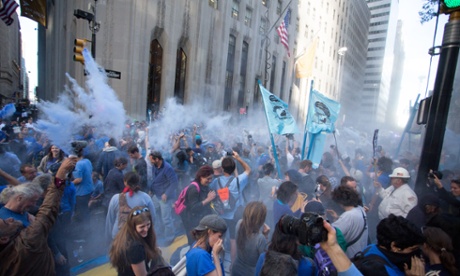 Monday’s marchers settled just two blocks from the New York Stock Exchange, the destination marked out on maps that were distributed to demonstrators. A group of hundreds spanned several blocks, playing music, singing songs and using the human microphone to deliver instructions for the protest, including: “The police here are not our enemies – they are here to protect us now.”
Although many protesters set out with the aim of getting arrested, the crowd’s relations with police were considerably less adversarial compared to those of Occupy Wall Street, which happened in the same part of the city.
Legal observers in bright green caps dotted the protests and people were collecting the names and birthdays of those who were willing to be arrested.
One man was wrestled to the ground by police after running through the demonstration. Police officers formed a circle around the man and other police officers before he was handcuffed and led away.
“He wanted to break the blockade to get to the stock exchange and have the sit-in there,” said Peter Soeller, an Amnesty International intern who witnessed the incident. 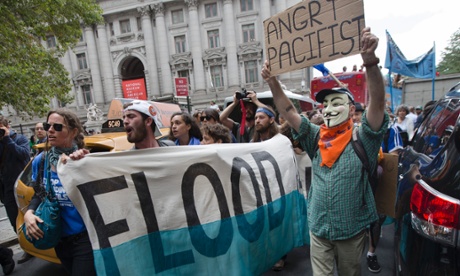 Soeller said he had met the man yesterday at the People’s Climate March, where he was walking with a group of anarchists.
Before making the run toward the Stock Exchange, the man had been standing on top of a phone booth in the crowd, assisting with the human microphone.

Bobbi Righi, a retired math teacher, came to New York City from Seattle with her husband, daughter and son-in-law, because she thinks more action needs to be taken to address climate change.
Righi was not planning to be arrested: “Because we have a plane to catch”.
She participated in workshops about climate change over the weekend and was at the People’s Climate March on Sunday. She thinks the argument that cutting carbon will cut jobs is a “false contradiction” and said that we should instead be investing in things like alternative energy and mass transit.
Standing on the other side of the police barricades, a row of men in ties and button-down shirts contrasted the more artfully dressed protest crowd. One man, a physician, thought the protests were “awesome”, but that opinion was not shared across the line.
“I think it’s bullshit,” said John, a broker who did not want his last name or the firm he works for identified. He said that the protests were obnoxious and that climate change is a scam created by Al Gore to make money.
He said that his clients had made a lot of money by investing in companies that burn fossil fuels. “I think anything that makes clients money is good for my clients, and it’s good for the country’s economy,” John said.
The demonstration began at 9am in Battery Park, at the bottom of Manhattan. Demonstrators received non-violent, direct action training before heading up to the Financial District.
Carrying a more than 300 foot long banner meant to represent the “river” of people protesting, demonstrators walked toward the stock exchange. They hit a literal snag when trying to wrangle large inflatables meant to represent Carbon around the charging bull landmark near Wall Street. The NYPD confiscated the two Carbon balloons and deflated at least one of them shortly after.

Donate
By Rise Up TimesPublished On: September 22nd, 2014Comments Off on The Guardian: Dozens arrested as police face off with Flood Wall Street protesters