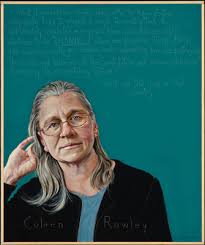 In 2002, then-F.B.I. agent Coleen Rowley appeared on the cover of Time magazine, along with two corporate whistleblowers, as Time’s Persons of the Year.
Earlier in 2002, Rowley, then chief legal counsel in the F.B.I.’s Minneapolis bureau, gained headlines for writing a memo to F.B.I. Director Robert Mueller documenting the F.B.I. Headquarters’ series of failures in the weeks leading up to the 9/11 attacks. She later testified before the Senate Judiciary Committee, sharing with Congress and the American people what took place in the summer of 2001, and suggesting reforms to avoid repeats of the same mistakes.
Rowley retired from the F.B.I. in 2004. Since leaving the government, the tell-it-like-it-is Iowa native made a 2006 run for Congress on the Democratic-Farmer-Labor Party ticket in Minnesota, and has become one of the most outspoken critics of America’s post-9/11 descent into militarism and the surveillance state.
In this first of a two part series, Rowley shares her philosophy on government employment, both in the civilian and military sectors.
Coleen Rowley, thank you for granting this interview. Before discussing issues of war and peace, and the ability of governments to bring about both, I would like to ask if you could share with Tikkun Daily readers your own thoughts about the word “heroism.”
Since 9/11, our national political discourse has been saturated in “hero-speak,” if you will. What strikes me about your own whistleblowing background, as well as that of others like Thomas Drake, Jesselyn Radack and Ed Snowden, is how calm and reflective all of you are. I certainly would not hesitate to describe the courses of action that flowed from those states of mind to be heroic. It would seem that it is these thought-centered actions which are ultimately going to save our American freedoms, not bombs, guns and war.
Can you share with me your thoughts about the concept of heroism, and whether you think the very concept has been manipulated by politicians in the post-9/11 era to nefarious ends. If you believe the word has been manipulated, what can we do as a citizenry to help reaffirm the basic principle that human thought and regard for individual rights will preserve and defend American democracy, not the instruments of violence, be they in private hands or in the hands of government actors?
Thanks for all you do too, Timothy.
I hold conflicted, paradoxical views about “heroism”. For me personally, I eventually came to see it as a mistake to even accept any award–as I explained in my 2005 speech “Awards: the good, the bad and the ugly” I don’t believe in calling any person “heroic” as we are all mixed bags (also called “sinners”) and I agree that the whole concept of putting someone on a pedestal has many downsides and can be used for manipulation of public opinion. Even the Nobel Peace Prize has been subverted over the years. However, I do think that human actions can be heroic. Ethical decision-making needs to be recognized, applauded and hopefully emulated by all citizens.
(Link to 2005 speech: Awards: the good, the bad and the ugly – Coleen Rowley)
When you, along with other American whistleblowers, met with Ed Snowden in October to give him the Sam Adams Award, what feelings were going through your heart? If I were in your shoes, I would have been very emotional, not only as a result of meeting a great American hero, but also the sad awareness of having to do so on foreign soil, in Russia, not here at home in America. What were you feeling during that event in Russia with Ed Snowden, and how did you process it all?

Donate
By Rise Up TimesPublished On: January 10th, 2014Comments Off on Tikkun: Q & A with Coleen Rowley, F.B.I. Whistleblower: Part One