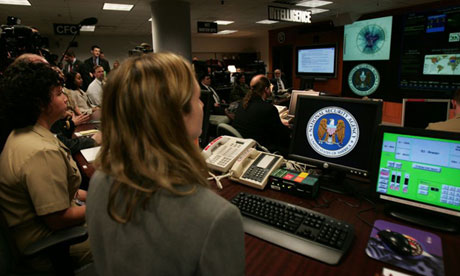 The dissemination of the sensitive data transgressed both the NSA’s affirmations to the secret surveillance court about the extent of the access it provided, and prompted incensed Fisa court judges to question both the NSA’s truthfulness and the value of the now-cancelled program to counter-terrorism.

While the NSA over the past several months has portrayed its previous violations of Fisa court orders as “technical” violations or inadvertent errors, the oversharing of internet data is described in the documents as apparent widespread and unexplained procedural violations.

“NSA’s record of compliance with these rules has been poor,” wrote judge John Bates in an opinion released on Monday night in which the date is redacted.

“Most notably, NSA generally disregarded the special rules for disseminating United States person information outside of NSA until it was ordered to report such disseminations and to certify to the [Fisa court] that the required approval had been obtained.”

In addition to improperly permitting access to the email and internet data – intended to include information such as the “to” “from” and “BCC” lines of an email – Bates found that the NSA engaged in “systemic overcollection”, suggesting that content of Americans’ communications was collected as well.

Privacy experts have long noted that email metadata is inherently content-rich, as it will show interactions with businesses; or political affiliations such as listserv membership.

The court had required the NSA to comply with a longstanding internal procedure for protecting Americans’ sensitive information prior to sharing the data internally within NSA, known as United States Signals Intelligence Directive 18 (USSID 18) and also declassified on Monday night; and additionally required a senior NSA official to determine that any material shared outside the powerful surveillance agency was related to counter-terrorism.

Yet in a separate Fisa court document, the current presiding judge, Reggie Walton, blasted the government’s secret declaration that it followed USSID 18 “rather than specifically requiring that the narrower dissemination provision set forth in the Court’s orders in this matter be strictly adhered to”.

In an opinion apparently written in June 2009, Walton said the court was “gravely concerned” that “NSA analysts, cleared and otherwise, have generally not adhered to the dissemination restrictions proposed by the government, repeatedly relied on by the court in authorizing the [email and internet bulk] metadata, and incorporated into the court’s orders in this matter [redacted] as binding on NSA.”

Walton said the NSA’s legal team had failed to satisfy the training requirements that NSA frequently points to in congressional testimony as demonstrating its scrupulousness. Walton added that he was “seriously concerned” by the placement of Americans’ email and internet metadata into “databases accessible by outside agencies, which, as the government has acknowledged, violates not only the court’s orders, but also NSA’s minimization and dissemination procedures as set forth in USSID 18.”

Bates’ heavily redacted opinion suggests that the collection of the internet and email metadata from Americans in bulk provided only minimal relevant information to FBI for generating terrorism investigation leads, the entire purpose of the program. Bates questioned, as a “threshold concern”, the government’s willingness to represent its activities to the Fisa court it cites as the principal check on its surveillance powers.

“The government’s poor track record with bulk [internet and email] acquisition … presents threshold concerns about whether implementation will conform with, or exceed, what the government represents and what the court may approve,” Bates wrote.

Previously disclosed documents show that Bates and Walton wrestled with NSA’s veracity and its overcollection repeatedly, in 2009 and 2011, over different bulk surveillance programs. For much of 2009, Walton prevented NSA analysts from querying its bulk American phone records database until he was satisfied the government complied with court-ordered restrictions.

In 2011, Bates wrote that the “volume and nature” of the NSA’s bulk collection on foreign internet content was “fundamentally different from what the court had been led to believe”.

Yet the documents disclosed Monday night, thanks to a transparency lawsuit, show that Bates and Walton permitted the surveillance of Americans’ bulk email and internet metadata to continue under additional restrictions, out of concern for the ongoing terrorism threat.

Unlike the bulk surveillance of Americans’ phone data and foreigners’ internet communications, the NSA and the Obama administration decided in 2011 to cease collecting email and internet content from Americans in bulk, a development first reported by the Guardian.

Shawn Turner, a spokesman for the Office of the Director of National Intelligence, told the Guardian at the time that the decision was reached for “operational and resource reasons”. He did not mention the overcollection, nor the dissemination of the information within and beyond NSA in violation of court orders, nor the discomfort with the program by at least two Fisa court judges.

Elizabeth Goitien of the Brennan Center for Justice at New York University said that the declassified opinions raise disturbing questions about the NSA’s truthfulness.

“Neither of those explanations is particularly comforting.”

Be Thankful for the People Struggling to Limit NSA Spying