The blockade on Syria – on Syrian life not weaponry – reaches into the heart of social, historical and cultural life.

This is a fascinating article exploring a too often overlooked but vitally important aspect of US/UE/GCC sanctions imposed on Syria. Syria is a richly diverse society with thousands of years of history and a fully literate and highly educated population. There is an effort to rewrite history. Culture is an essential part of resistance. Barbara Nimri Aziz presented this information as part of a panel titled: ‘What’s At Stake in US War on Syria’ held at the International Action Center and earlier as a panel at the Left Forum.  —Sara Flounders, International Action Center

The blockade on Syria – on Syrian life not weaponry – reaches into the heart of social, historical and cultural life. This policy is integral to the US-led assault against the country and against Arab national integrity. No-fly zone, poison gas, foreign guerrillas, sectarian massacres: These frightening yet alluring, ambitious yet wearying, thoughts define Syria today. More reason to take time for other dramas—Syrian TV serials and their politics.

Apart from an opportune “Ramadan” reference, this topic may seem inconsequential or out of place for a nation engulfed in conflict. Yet the subject isn’t too slight a target for US policies.  Extending its aggression against Syria into every corner of the economy, the United States has seen TV productions by its longstanding enemy dumped from international satellites, a move that essentially severs global access. This move followed withdrawal of supporting infrastructure for widely popular Syrian programs by US-Gulf state allies, erstwhile co-sponsors, customers and distributors of TV dramas originating in Damascus.  Now, why would anyone censor Syrian TV? Are we not led to believe that Syrian media’s sole purpose is to mislead rather than inform? How could anything of value originate from that ‘brutal dictatorship’? Anyway, how can ‘mindless’ TV soaps warrant an international embargo? 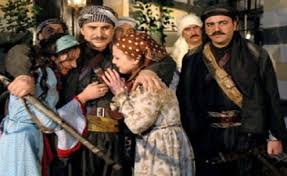 People familiar with the range of public issues which Syrian producers address through popular drama will understand. Over the past decade the Damascus-based industry rose to become a major center of high quality TV drama. Its productions won admiration across the Arab-speaking world, rivaling once dominant Egyptian dramas. 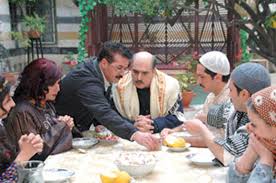 What Syrian dramas, most of which are made by private companies, offer is best illustrated by two productions: – “Bab al-Hara” *(www.istikana.com/en/episodes/bab-el-hara-1-1), first released during Ramadan month in 2006, and a hugely successful 2010 production, “Ma Malakat Aymanukum” (www.middle-east-online.com/english/?id=41098). “Bab al-Hara” is a colonial period drama typical of the historical productions Syria excels in. This and dramatizations of early epochs hold special significance throughout the Arab world through portrayals and reflections of Arab civilization’s accomplishments and historical events. 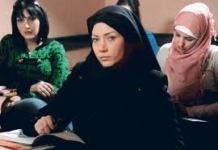 Yes, armed conflict itself thwarts artistic production. Hundreds of Syria’s most talented and liberal-thinking people– actors, designers, musicians, writers, technicians– are jobless today. Many flee in search of outside employment, like those featured in a token CNN Ramadan story (www.cnn.com/video/data/2.0/video/business/2013/07/19/exp-marketplace-middle-east-syria-ramadan-ratings.cnn.html.)

By contrast view yourself the Syrian Ramadan 2013 series (https://www.youtube.com/watch?v=8lQDCeW80Lg) broadcast over lbc TV. Theater is one of many institutions devastated by war.

But the destruction of this industry is not collateral damage. It’s deliberate. The sale of Syrian series came to a standstill when networks in Saudi Arabia and UAE (where major distributors are located) cancelled orders for Syrian productions. Next, in June 2012 the Arab League itself ordered satellite transmitters Hotbird, Nilesat and Arabsat to cease carrying Syrian media including Syrian TV and Syrian Drama TV. Whereas Syria exported 25 new TV series in 2010, the following year producers were able to sell only one—a direct effect of the US-designed embargo. Of course this blockade has significant economic consequences for Syria. But its real target is Syria’s cultural and ideological position in the region.

The Arab public and specialists recognize that Syrian productions are unrivaled in their authenticity and ideology. Syria is known to have the highest standards in historical research (applied to the arts) and in Arabic language. Besides the technical, literary and entertainment value of specific stories, Syria’s dramatic productions represent a struggling political consciousness–the Arab nationalist ideal. (This includes celebration of Palestinian resistance.) Syrian dramas invoke regional pride and values largely absent in productions from neighboring countries. The industry’s collapse was targeted because these productions embody and espouse values which the West seeks to eliminate. Nothing is overlooked, it seems, in the US design against Syria. Meanwhile Turkish TV serials, translated into Arabic, their focus limited to romance and family conflict, keep people distracted. A coincidence?

Feedback welcome; and please send information updating us on this issue. My blogs are also posted on RadioTahrir.org  Barbara Nimri Aziz is a veteran anthropologist, author and NY-based radio host.

*All photos were found on Google images by WAMMToday.  From Wikipedia: Bab Al-Hara (Arabic: باب الحارة‎; “The Neighborhood’s Gate”) is one of the most popular television series in the Arab world,[1] watched by tens of millions of people[2] from “poverty-stricken Gaza to the opulent cities of the Persian Gulf.”[3]The series chronicles the daily happenings and family dramas in a neighborhood in Damascus, Syria in the inter-war period under French rule when the local population yearned for independence.[3] The appeal is cross-generational, and viewers include Muslims, Christians, Druze and Jews from Arab countries, the show was a huge success in the Arab World so MBC decides to renew it for a second season, the series’ second season was even a bigger success as the finale was watched by over a 50 million viewers around the Arab World.

← Henry A. Giroux> The Violence of Organized Forgetting
[Video] Jack Nelson-Pallmeyer on the Culture of War and National Security State →