Fixations on denouncing Edward Snowden distract, by design, from the serious transgressions of those who are far more powerful 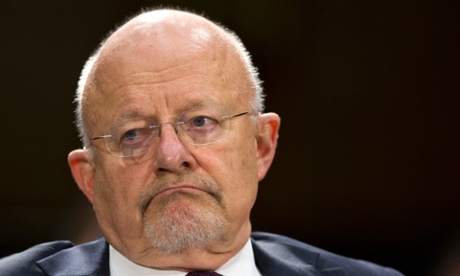 The NSA revelations continue to expose far more than just the ongoing operations of that sprawling and unaccountable spying agency. Let’s examine what we have learned this week about the US political and media class and then certain EU leaders.
The first NSA story to be reported was our June 6 article which exposed the bulk, indiscriminate collection by the US Government of the telephone records of tens of millions of Americans. Ever since then, it has been undeniably clear that James Clapper, the Director of National Intelligence, outright lied to the US Senate – specifically to the Intelligence Committee, the body charged with oversight over surveillance programs – when he said “no, sir” in response to this question from Democratic Sen. Ron Wyden: “Does the NSA collect any type of data at all on millions or hundreds of millions of Americans?”

That Clapper fundamentally misled Congress is beyond dispute. The DNI himself has now been forced by our stories to admit that his statement was, in his words, “clearly erroneous” and to apologize. But he did this only once our front-page revelations forced him to do so: in other words, what he’s sorry about is that he got caught lying to the Senate. And as Salon’s David Sirota adeptly documented on Friday, Clapper is still spouting falsehoods as he apologizes and attempts to explain why he did it.
How is this not a huge scandal? Intentionally deceiving Congress is a felony, punishable by up to 5 years in prison for each offense. Reagan administration officials were convicted of misleading Congress as part of the Iran-contra scandal and other controversies, and sports stars have been prosecuted by the Obama DOJ based on allegations they have done so.
Beyond its criminality, lying to Congress destroys the pretense of oversight. Obviously, members of Congress cannot exercise any actual oversight over programs which are being concealed by deceitful national security officials.
In response to our first week of NSA stories, Wyden issued a statement denouncing these misleading statements, explaining that the Senate’s oversight function “cannot be done responsibly if senators aren’t getting straight answers to direct questions”, and calling for “public hearings” to “address the recent disclosures,” arguing that “the American people have the right to expect straight answers from the intelligence leadership to the questions asked by their representatives.” Those people who have been defending the NSA programs by claiming there is robust Congressional oversight should be leading the chorus against Clapper, given that his deceit prevents the very oversight they invoke to justify these programs.
But Clapper isn’t the only top national security official who has been proven by our NSA stories to be fundamentally misleading the public and the Congress about surveillance programs. As an outstanding Washington Post article by Greg Miller this week documented:

“[D]etails that have emerged from the exposure of hundreds of pages of previously classified NSA documents indicate that public assertions about these programs by senior US officials have also often been misleading, erroneous or simply false.”

Please re-read that sentence. It’s not just Clapper, but multiple “senior US officials”, whose statements have been proven false by our reporting and Edward Snowden’s disclosures. Indeed, the Guardian previously published top secret documents disproving the claims of NSA Director Gen. Keith Alexander that the agency is incapable of stating how many Americans are having their calls and emails invaded without warrants, as well as the oft-repeated claim from President Barack Obama that the NSA is not listening in on Americans’ calls without warrants. Both of those assertions, as our prior reporting and Miller’s article this week demonstrates, are indisputably false.
Beyond that, the NSA got caught spreading falsehoods even in its own public talking points about its surveillance programs, and were forced by our disclosures to quietly delete those inaccuracies. Wyden and another Democratic Senator, Mark Udall, wrote a letter to the NSA identifying multiple inaccuracies in their public claims about their domestic spying activities.
Defending the Obama administration, Paul Krugman pronounced that “the NSA stuff is a policy dispute, not the kind of scandal the right wing wants.” Really? In what conceivable sense is this not a serious scandal? If you, as an American citizen, let alone a journalist, don’t find it deeply objectionable when top national security officials systematically mislead your representatives in Congress about how the government is spying on you, and repeatedly lie publicly about resulting political controversies over that spying, what is objectionable? If having the NSA engage in secret, indiscriminate domestic spying that warps if not outright violates legal limits isn’t a “scandal”, then what is?
For many media and political elites, the answer to that question seems clear: what’s truly objectionable to them is when powerless individuals blow the whistle on deceitful national security state officials. Hence the endless fixation on Edward Snowden’s tone and choice of asylum providers, the flamboyant denunciations of this “29-year-old hacker” for the crime of exposing what our government leaders are doing in the dark, and all sorts of mockery over the drama that resulted from the due-process-free revocation of his passport. Thisis what our media stars and progressive columnists, pundits and bloggers are obsessing over in the hope of distracting attention away from the surveillance misconduct of top-level Obama officials and their serial deceit about it.
What kind of journalist – or citizen – would focus more on Edward Snowden’s tonal oddities and travel drama than on the fact that top US officials have been deceitfully concealing a massive, worldwide spying apparatus being constructed with virtually no accountability or oversight? Just ponder what it says about someone who cares more about, and is angrier about, Edward Snowden’s exposure of these facts than they are about James Clapper’s falsehoods and the NSA’s excesses.
What we see here, yet again, is this authoritarian strain in US political life that the most powerful political officials cannot commit crimes or engage in serious wrongdoing. The only political crimes come from exposing and aggressively challenging those officials.
How is it anything other than pure whistleblowing to disclose secret documents proving that top government officials have been systematically deceiving the public about vital matters and/or skirting if not violating legal and Constitutional limits? And what possible justification is there for supporting the ability of James Clapper to continue in his job despite what he just got caught doing?

Then we come to the leaders of various EU states. These leaders spent the last week feigning all sorts of righteous indignation over revelations that the NSA was using extreme measures to spy indiscriminately not only on the communications of their citizens en masse but also on their own embassies and consulates – things they learned thanks to Edward Snowden’s self-sacrificing choice to reveal to the world what he discovered inside the NSA.
But on Tuesday night, the governments of three of those countries – France, Spain and Portugal – abruptly withdrew overflight rights for an airplane carrying Bolivian President Evo Morales, who was attempting to fly home from a conference in Russia. That conduct forced a diversion of Morales’ plan to Austria, where he remained for 13 hours before being able to leave this morning.
These EU governments did that because they suspected – falsely, it now seems – that Morales’ plane was also carrying Snowden: the person who enabled them to learn of the NSA spying aimed at their citizens and themselves that they claim to find so infuriating. They wanted to physically prevent Bolivia from considering or granting Snowden’s request for asylum, a centuries-old right in international law. Meanwhile, the German government – which has led the ritualistic condemnations of NSA spying that Snowden exposed – summarily rejected Snowden’s application for asylum almost as soon as it hit their desks.
A 2013 report from Open Society documents that Spain and Portugal were among the nations who participated in various ways in rendition flights – ie kidnapping – by the US. In particular, the report found, “Spain has permitted use of its airspace and airports for flights associated with CIA secret detention and extraordinary rendition operations.” Similarly, “Portugal has permitted use of its airspace and airports for flights associated with CIA extraordinary rendition operations.” The French judiciary previously investigated reports that the French government knowingly allowed the CIA to use its airspace for renditions.
So these EU states are perfectly content to allow a country – when it’s the US – to use their airspace to kidnap people from around the world with no due process. But they will physically stop a plane carrying the president of a sovereign state – when it’s from Latin America – in order to subvert the well-established process for seeking asylum from political persecution (and yes: the US persecutes whistleblowers).
All of this smacks of exactly the kind of rank imperialism and colonialism that infuriates most of Latin America, and further exposes the emptiness of American and western European lectures about the sacred rule of law. This is rogue nation behavior. As human rights law professor Sarah Joseph put it:

As the Index on Censorship said to EU states this morning: “Members of the EU have a duty to protect freedom of expression and should not interfere in an individual’s attempts to seek asylum. Edward Snowden is a whistleblower whose free speech rights should be protected not criminalised.”

As usual, US officials and their acolytes who invoke “the law” to demand severe punishment for powerless individuals (Edward Snowden, Bradley Manning) instantly exploit the same concept to protect US political officials, their owners and their allies from the worst crimes: torture, warrantless eavesdropping, rendition, systemic financial fraud, deceiving Congress and the US public about their surveillance behavior. If you’re spending your time calling for Ed Snowden’s head but not James Clapper’s, or if you’re obsessed with Snowden’s fabricated personality attributes (narcissist!) but apathetic about rampant, out-of-control NSA surveillance, it’s probably worth spending a few moments thinking about what this priority scheme reveals.

Donate
By Rise Up TimesPublished On: July 8th, 2013Comments Off on Glenn Greenwald> James Clapper, EU play-acting, and political priorities