The End of Syria as We Know It?

Beirut.
The short answer is Iran and Hezbollah according to Congressional sources. “The Syrian army’s victory at al-Qusayr was more than the administration could accept given that town’s strategic position in the region. Its capture by the Assad forces has essentially added Syria to Iran’s list of victories starting with Afghanistan, Lebanon, Iraq, as well as its growing influence in the Gulf.” 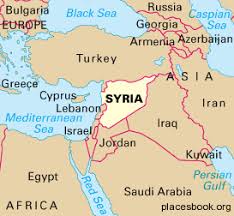 Other sources are asserting that Obama actually did not want to invoke direct military aid the rebels fighting to topple the Assad government or even to make use of American military power in Syria for several reasons. Among these are the lack of American public support for yet another American war in the Middle East, the fact that there appears to be no acceptable alternative to the Assad government on the horizon, the position of the US intelligence community and the State Department and Pentagon that intervention in Syria would potentially turn out very badly for the US and gut what’s left of its influence in the region. It short, that the US getting involved in Syria could turn out even worse than Iraq, by intensifying a regional sectarian war without any positive outcome in sight.

Donate
By Rise Up TimesPublished On: June 23rd, 2013Comments Off on Why Obama is Declaring War on Syria