From June 2011 to August 2012 my partner David and I rode our bicycles 12,200 miles, from our home in Minneapolis around the perimeter of the United States. On the trip we observed a puzzling contradiction. People overwhelmingly oppose the current wars, yet young people are still signing up to “serve.” What follows are thoughts on how this works in my own hometown and the hundreds of urban and rural communities we cycled through. 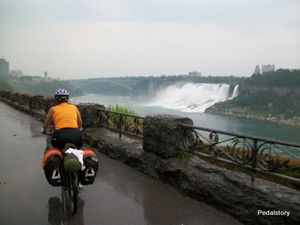 Minneapolis is an antiwar town. The Minneapolis City Council has just passed a resolution which calls for a shift in federal spending priorities away from war to, instead, local essential needs.* But youth going to a football game here receive a much louder message: The stadium in downtown Minneapolis displays mega-sized banners of the Minnesota National Guard in full military gear, draped next to giant portraits of Minnesota football heroes. All banners are framed in Viking purple and gold. The message to young people: The best way to serve our state is to sign up for war.
Connecting war with team spirit and athletic heroes is effective advertising. There are other less obvious ways of sending the message to new generations that going to war is the best way to serve their communities. One way is to glorify past wars. This is more effective in smaller towns than in larger cities.
Minneapolis does have its war monuments. Lucia Wilkes Smith, a former director of Women Against Military Madness, took me to see Hennepin County’s World War I Memorial not far from her home. The seemingly endless rows of trees and stones, one for every soldier, are a graphic reminder of the sheer numbers of men, and a few women, who served during the Great War. For Lucia it firms her resolve to work for peace. For others it probably reinforces support for the U.S. military. This is, after all, “Victory Memorial Parkway,” not “All Quiet on the Western Front Boulevard.”
But for most Minneapolitans the memorial, with its paved paths and mile of green space, is just a good place to ride a bike, see a band, or play Frisbee.
In many of the small towns we visited during our cycling journey, however, war memorials speak louder to young people. The memorial bridge or road that forms the main artery into town is festooned with Army, Navy, and Marines flags. Memorial statues are located in the center of the only park in town. The memorial is the place people gather for sports or other occasions, and to simultaneously venerate soldiers past, present, and future. 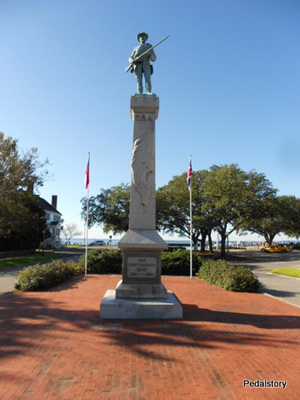 In the South we noted that many of these central memorials are “To the Unknown Confederate Soldier.” Cycling into Edenton, North Carolina, we were struck by such a statue, situated in the center of town, surrounded by state and U.S. flags. The main café, a few steps from the statue, is decorated with photos and paintings celebrating local military “heroes” from the Confederacy to the war in Afghanistan, connecting the past to current wars.
Young people in Edenton inspired to join the army don’t have to go far to see where they might be training. They can visit Jacksonville, North Carolina, a city of approximately 70,000 adjacent to Camp Lejeune military base, where every establishment caters to the soldiers.
Jacksonville is the most youthful city in the United States, full of young Marine families.
When we were there, in October 2011, they were getting ready for Halloween, Oktoberfest, and a community fundraiser to cure muscular dystrophy. Everyone seemed to be trying to outdo the other with signs proclaiming support for the troops. The Super 8 hotel where we stayed was serving free ribs and beer for the mostly military clientele. Young men not old enough to drink were grabbing two Buds and climbing into their rooms through the windows while hotel personnel smiled indulgently.
Subscribe or “Follow” us on riseuptimes.wordpress.com. For the TC EVENTS calendar and the ACTIONS AND ACTION ALERTS click on the tab at the top of the page and click on the item of interest to view. WAMMToday is also on Facebook! Check the WAMMToday page for posts from this blog and more! “Like” our page today.
Reading the Marine Corps paper in Jacksonville one might conclude that Lejeune is a summer camp or training center for soccer-playing clinic builders. The October 2011 issue had stories about Marines constructing hospitals and schools in Latin America, an MRI machine on its way to Helmand Province, and the local soccer game between Marines and Jacksonville teens. But the sounds of bombs bursting in air as we rode out of town, and a flashing sign: “WARNING Military exercise when lights are flashing: Watch for thick smoke, low visibility on freeway” reminded us of the real purpose of this base.
On an individual level it is understandable that so many young people throughout the country—especially in small towns—would join the military. Even if they are not convinced that it is the way to become a community hero, it is often the only job they can find. For people in towns where the one timber, brass, steel, or tobacco mill has closed down, joining the military is—ironically—the only way to keep the family at home. This overwhelming economic incentive, combined with the war-selling machine, is what perpetuates the production of new soldiers for future wars in rural areas that today provide the highest percentage of recruits.
That is why it is so important to measure and speak loudly of the cost of wars to local communities. For base towns like Jacksonville the glorification of violence must create psychic dissonance not just for soldiers but also for their children. Consider these two excerpts from local publications in Jacksonville:
Jacksonville Daily News, “Surviving on the Battlefield” (October 21, 2011):
A tour of Camp Lejeune’s new infantry immersion trainer is like a visit to an elaborate theme park – albeit one set in Afghanistan, with piped–in smells of rotting flesh and burning wood, booby trapped with black powder explosive.
An authentic Afghan village, from the dirt covering the floors to the prayer call sounding overhead, the $20 million 3,200 square foot facility is a jaw-dropping novelty.
Rotovu, the official weekly of Lejeune Marine Corps Base, “Ask the Expert” advice column, response to a question about getting kids to stop fighting. (October 22, 2011):
It is never too early to teach children that violence is not an acceptable problem-solving method.
Well, on that the “Expert” and I agree, but to do so we need to stop sending children and youth the double messages about the honorableness of violence. In addition, we have to find a way to build sustainable peacetime economies, especially in small, formerly one-industry communities. The first step is to do what the Minneapolis City Council has resolved: stop the wars and transfer funds to local needs, then we will have the funds to invest in these communities.
The question still remains: How do we meet the needs of veterans and remember past wars without sending more young people the message that joining the army is the way to become a hero? I put this question to Jim Northrup, author of Anishinaabe Syndicated and columnist for The Circle, a Native American newspaper in Minnesota. Jim often writes about his experience in Vietnam and as a veteran, and he and his wife Pat make regular pilgrimages to the Vietnam Memorial Wall in Washington, D.C.
He said: “The Vietnam memorial has 55,000 names. I would depict 55,000 families crying. No one would ever go to war again.” Then he added: “The best way to honor veterans is to stop making them.”
* created by the initiative Minnesota Arms Alternative Spending Project (MNASAP) http://www.mnasap.org.
WAMM member Anne Winkler-Morey teaches history and ethnic studies at Metro State University. She is writing a book titled “Turtle Road”, about the bike trip. She can be reached at winkl002@umn.edu.
© 2012-2013 Women Against Military Madness. All rights reserved.

Donate
By Rise Up TimesPublished On: December 23rd, 2012Comments Off on Anne Winkler-Morey> Honor Veterans! Stop Making Them!