Consequences of War on Iran

“Let’s be clear—we’re already at war on Iran. And the drumbeat for a military attack increases daily. Yet rarely is there any consideration for the consequences and the fact that never before in history has a bomb with depleted uranium been dropped on a nuclear site.” 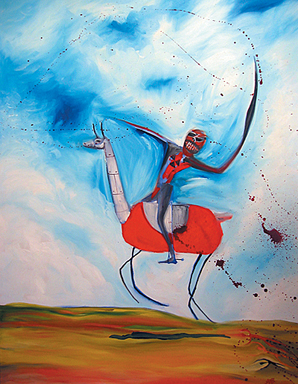 Patriarchy on the Move. Oil on canvas by Jane Evershed. evershed.com

The prime minister of Israel, Benjamin Netanhayu, is threatening a preemptive attack against Iran. Right-wing U.S. lobby groups, affiliated with the rightwing of Israel, have been pressuring Congress for years to pass laws to hurt the Iranian people. Now Congress is being pressured to join Israel in an attack on Iran. We must ask ourselves to consider the very serious and devastating consequences.
First, Let’s Be Clear: We’re Already at War. Iranians don’t just hear verbal threats from the U.S., its Western allies, and Israel, such as that they must “tighten the noose” “cripple Iran” and create “forced deprivation”; Iranians experience the reality that these threats have resulted in.
That’s because the U.S. and Israel have been waging a cyber war against Iran. The Stuxnet virus shut down a considerable portion of Iran’s civilian nuclear program, and infected infrastructure activities, including power plants, oil rigs, and water supplies. (1)
Also causing severe internal damage, the U.S. has for a number of years now funded, trained, and backed terrorist groups such as Jundullah, which has been bombing Iranian targets, including military installations and civilians at Iranian mosques. In addition, the U.S. State Department recently took the organization MEK (the People’s Mujahedin of Iran) off its terrorist list to make overt arming and funding of the group more possible. (2) The assassination of five Iranian nuclear scientists in the past two years has been attributed to the Israeli intelligence service, Mossad. (3)
Outside Iran’s borders, the U.S. has surrounded the country with its military bases. Since late spring, F-22 and F-15C warplanes have moved into two separate bases in the Persian Gulf to bolster the combat jets already in the region and carrier strike groups in the area. (4) The U.S. currently has thousands of military personnel and several military bases on an area of about 40 percent of Kuwait’s land. (5) Israel has become a de facto U.S. military outpost with U.S. and Israeli command structures closely integrated. (6)
Sanctions Are an Act of War: The crippling sanctions on Iran have resulted in deaths caused by shortages of medicine, according to an official from the Tehran Province Thalassemia Association. (Thalassemia is a blood disorder originating in the Middle East). Kidney dialysis and transplant patients are also suffering the effects of the shortages, with the impact expected to get worse in the coming months. (7) Last August, the Iranian Hemophilia Society announced that “the lives of tens of thousands of children are being endangered by the lack of proper drugs caused by international economic sanctions.” (8)
Do we want the children of Iran to suffer the same consequences as the children of Iraq and Gaza? A 2011 report by professor Omar Dewachi found that nearly a quarter of Iraqi children under five have stunted growth as a result of chronic malnutrition. (9) When Norwegian Dr. Mads Gilbert, hosted by Women Against Military Madness, came to Minnesota, he spoke about growth-stunting consequences of the sanctions and blockade on Gaza, something experienced by one out of every three children in Gaza:

[Growth stunting] also affects brain development and the ability to learn. This is a direct consequence of malnutrition. Remember, this is not caused by drought or natural disasters, but a deliberate, man-made lack of food and water, imposed, planned, and executed in the most detailed way by the Israeli government. (10)

The first of the 37,000-pound Massive Ordnance Penetrators (bunker busters) was delivered to the U.S. Air Force one year ago. Their development was fast tracked at Boeing’s top secret Phantom Works facility and they are “Ready to Go”.
When we hear, “Let the sanctions work,” we must realize that sanctions anywhere are a weapon of war and that children suffer the most. How can we forget the 500,000 children who died as a result of U.S.-imposed sanctions on Iraq?
What Would Happen if Iran Were Attacked Militarily? General Martin Dempsey, who heads the Joint Chiefs of Staff, told the National Journal that a war on Iran “would be really destabilizing” and that the U.S. should not be complicit in any attack against Iran. (11) Former National Security Adviser Zbigniew Brzezinski has said a war on Iran could drag out for years and would have economic consequences devastating for the average American. (12) Former Defense Secretary Robert Gates warned recently that a U.S. or Israeli attack on Iran would have disastrous consequences. (13)
Some Israeli officials have also warned about the dangers of a war on Iran. Former Israeli Mossad Chief Efraim Halevy stated that a war on Iran would not be a war of weeks or months, but a generations-long war. Iran commands the eighth largest active duty military in the world, as well as highly trained special forces. (14)
Consequences of a Military Attack: We have to remember the devastating effects of depleted uranium (DU) on the civilians of Iraq, Afghanistan, and on our own veterans. When depleted uranium munitions impact a target, the uranium coating of these weapons becomes a powder that easily contaminates the surrounding air, soil, and water. Depleted uranium is both chemically toxic and highly radioactive. (15)

Learn about the potential health affects of depleted uranium (DU) munitions on American soldiers who’ve served and the civilians in the areas used. Get the facts. Earn your degree. dU101.org
The U.S. bombed Fallujah twice with DU munitions, and now there are so many babies being born with deformities—as many as one in six—that doctors in Fallujah are advising women not to have children. (16) The Gulf War Veterans Association reports that at least 300,000 Gulf War I vets have developed incapacitating illnesses. (17)
And now Boeing has developed a bigger and better bomb with depleted uranium—a 37,000- pound bunker-buster called the MOP (Massive Ordnance Penetrator), which it delivered to the U.S. Air Force one year ago. These bombs are “Ready to Go”, designed to blast through up to 200 feet of concrete, able to attack Iran’s nuclear sites. (18)
Israel has already received 55 U.S.-made bunker-busting bombs. (19) Although the U.S. does not admit to using depleted uranium, international scientists like Dr. Arun Shrivastava, who have researched the use of DU extensively, warn that “the U.S. and NATO forces have indiscriminately used DU bombs and bullets, they continue to use these weapons in all war zones, and the Pentagon is planning to use the GBU-57A/B which is also known as the Massive Ordnance Penetrator designed to penetrate 60 meters of concrete.” (20)
One key site that would almost certainly be targeted in a bombing campaign, the uranium-conversion facility at Isfahan, houses 371 metric tons of uranium hexafluoride; toxic plumes released from a strike would reach the city center within an hour, killing or injuring as many as 70,000 and exposing over 300,000 to radioactive material, a study conducted by the University of Utah’s Hinckley Institute of Politics found. (21)
Any strike on the Bushehr Nuclear Reactor will cause the immediate death of thousands of people living in or adjacent to the site, and thousands of subsequent cancer deaths or even up to hundreds of thousands depending on the population density along the contamination plume, according to a report by the Center for International and Strategic Studies. (22)
Here is one alarming fact that we must consider: Never before in history has a bomb with depleted uranium been dropped over a nuclear site. If the depleted uranium in the bombs comes into contact with radioactive nuclear materials in the targeted nuclear sites, the potential for disaster would be magnified many times over, causing the release of radioactive materials into the biosphere of Central Asia (and by eventual extension, the entire Earth).
The cost in lives, injuries, and long-term dangers to the health of civilians, including genetic damage to unborn future generations from toxins and radioactive materials in the depleted uranium bombs dropped and nuclear materials leaked is incalculable. (23)
We can’t wait until after the fact. The time to stop a war is before it starts, and the time is now.
Margaret Sarfehjooy is the co-chair of the Middle East Committee of Women Against Military Madness.
1. http://dispatchesfromtheedgeblog.wordpress.com
2. http://irancoverage.com
3. http://www.fpif.org
4. http://www.nytimes.com
5. http://presstv.com/detail/223803.html
6. http://www.globalresearch.ca
7. http://www.washingtonpost.com (Thalassemia is a blood disorder which originated in the Middle East.)
8. http://www.globalresearch.ca
9. http://costsofwar.org
10. http://electronicintifada.net
11. http://www.huffingtonpost.com
12. http://www.aljazeera.com
13. http://hamptonroads.com
14. http://www.aljazeera.com
15. http://endoftheamericandream.com
16. http://readersupportednews.org
17. http://www.gulfwarvets.com
18. http://rt.com
19. http://www.guardian.co.uk
20. http://www.outsidethebeltway.com
21. http://consortiumnews.com
22. http://www.alternet.org
23. http://www.globalresearch.ca
© 2012 Women Against Military Madness. All rights reserved.

Donate
By Rise Up TimesPublished On: November 19th, 2012Comments Off on Margaret Sarfehjooy> Consequences of War on Iran