On November 11, 2012 Marie and John Braun received an award from the Minnesota Chapter of the Fellowship of Reconciliation for their peace and justice work and particularly for maintaining a pro-peace, antiwar vigil on the Lake Street/Marshall Avenue Bridge over the Mississippi between Minneapolis and St. Paul.

I want to begin by thanking Fellowship of Reconciliation for this award. 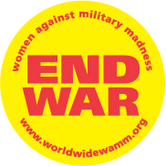 It is always humbling and, yes, a little embarrassing to receive a peace award, because I am so aware that while John and I have tried to do our part to bring about a more peaceful world, that we have stood side-by-side with so many people, who could just as well be standing here. At the same time, I believe that giving awards for peacemaking is a good thing because it is important to honor the peacemakers, not just the warmakers, and it is another opportunity to stop, for a short time, to remind ourselves of the plight of the people, especially children, who live with the suffering and deprivation that war brings and to join together to say “War is not the answer.”
I suspect one of the reasons we were chosen to receive this award is because of our dedication to continuing the vigil on the Lake Street/Marshall Avenue bridge so we are especially thankful to those of you who have stood with us through freezing cold weather, snow, rain, excessive heat and gloom of night for the past 13 years, never missing a Wednesday, even on special holidays.
It was in the spring of 1999, in response to the U.S. bombing of Yugoslavia, that members of Women Against Military Madness, Friends for a NonViolent World, and a number of local faith communities, started the weekly vigil on the bridge. We gathered in solidarity with people in Yugoslavia who were standing on their bridges in the belief that the U.S. would not intentionally kill large numbers of civilians. A courageous act indeed.
John and I have been committed to this vigil for all these years because we believe it is very important to have an ongoing public witness against war. As many of your know, it is hard to get the corporate media to cover peace events now, and it is so easy for them to say that the peace movement is dead, but, though our numbers are small at times, we are there . . . and I know that this vigil has been an inspiration to many others who started vigils in their own communities across the state of Minnesota and as far away as Sacramento, California.
The vigil has focused primarily on opposing the sanctions on Iraq and the war and occupation of Iraq and Afghanistan, but vigilers have frequently raised their voice relative to other issues: threats of war against Iran, North Korea, and Syria; torture; attacks on civil liberties; and U.S. support for the occupation of Palestine, calling on our government to fund human needs . . . not war. This month our focus is drones.
I feel particularly honored to be receiving this award on November ll, Armistice Day, the day the world agreed to end all wars. Fighting ceased on the 11th hour of the 11th day of the 11th month of 1918. People across the U.S. were horrified by the numbers of people killed and wounded in that war. Congress responded to the wish of people to put an end to war by passing a resolution calling for “exercises designed to perpetuate peace through good will and mutual understanding …” In 1938 Congress added that November 11th was to be “a day dedicated to the cause of world peace.” However Armistice Day was changed to Veterans Day in 1954 and has since lost much of its original purpose.
The Kellogg Brian Pact, another effort to renounced war, was signed on August 27, 1928, and passed into U.S. law in 1929 with only one Senator in opposition. While the co-authors of the Pact, French Foreign minister Aristide Briand and Frank Kellogg of Minnesota won the Nobel Peace Prize, and, while the Pact is still U.S. and International Law, it never made a meaningful contribution to international peace because our government, together with other signers, chose to ignore it.
Yet these efforts still stand as a tribute to those who understood the horror of war and who made valiant attempts to rid the world of the scourge of war.
Today, while most U.S. troops have left Iraq and the President is promising to bring U.S. troops home from Afghanistan by the end of 2014, the infrastructure in these countries remains in shambles and the children will continue to suffer the effects of war and occupation for many years to come. And, even as we hear reports of these wars drawing down, we hear new threats of war against other nations in the Middle East, and thousands of civilians in Pakistan, Yemen, Iran, Somalia, Afghanistan, and Iraq are dealing with the trauma of U.S. military drone dropping bombs on their communities — little war machines called Predators and the Reapers, which are unmanned and unaccountable.
When will it end and who will speak out against war and the atrocities of war if we don’t?
So, while we may never be able to fill their shoes, let us at least try to walk in the footsteps of peacemakers who have gone before, Dorothy Day, Mahatma Gandhi, Jane Addams, Howard Zinn, Sojourner Truth, Martin Luther King, Jr., Daniel Berrigan and so many others who believed in the dignity of every human person and understood the immorality and the futility of war . . . war which is the ultimate form of violence and certainly a crime against humanity.
` Let us have their courage and the courage of others like Bradley Manning, Julian Assange and Baltarsar Garzon whose truth-telling has made them pariahs and outcasts in the eyes of many in power , but who will someday go down in history as heroes of the people.
Thank you again Fellowship of Reconciliation.
Marie and John Braun are members of WAMM.

Donate
By Rise Up TimesPublished On: November 12th, 2012Comments Off on Marie Braun> Acceptance Speech, FOR Award for Peace and Justice Work