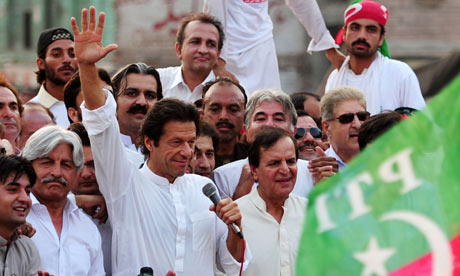 Imran Khan, centre, chairman of Pakistan Tehreek-e-Insaf, with party’s supporters. He has led a high-profile campaign against US drone strikes. Photograph: A Majeed/AFP/Getty Images
Imran Khan is, according to numerous polls, the most popular politician inPakistan and may very well be that country’s next Prime Minister. He is also a vehement critic of US drone attacks on his country, vowing to order them shot down if he is Prime Minister and leading an anti-drone protest march last month.
On Saturday, Khan boarded a flight from Canada to New York in order to appear at a fundraising lunch and other events. But before the flight could take off, US immigration officials removed him from the plane and detained him for two hours, causing him to miss the flight. On Twitter, Khan reported that he was “interrogated on [his] views on drones” and then added: “My stance is known. Drone attacks must stop.” He then defiantly noted: “Missed flight and sad to miss the Fundraising lunch in NY but nothing will change my stance.”
The State Department acknowledged Khan’s detention and said: “The issue was resolved. Mr Khan is welcome in the United States.” Customs and immigration officials refused to comment except to note that “our dual mission is to facilitate travel in the United States while we secure our borders, our people, and our visitors from those that would do us harm like terrorists and terrorist weapons, criminals, and contraband,” and added that the burden is on the visitor “to demonstrate that they are admissible” and “the applicant must overcome all grounds of inadmissibility.”
There are several obvious points raised by this episode. Strictly on pragmatic grounds, it seems quite ill-advised to subject the most popular leader in Pakistan – the potential next Prime Minister – to trivial, vindictive humiliations of this sort. It is also a breach of the most basic diplomatic protocol: just imagine the outrage if a US politician were removed from a plane by Pakistani officials in order to be questioned about their publicly expressed political views. And harassing prominent critics of US policy is hardly likely to dilute anti-US animosity; the exact opposite is far more likely to occur.
But the most important point here is that Khan’s detention is part of a clear trend by the Obama administration to harass and intimidate critics of its drone attacks. As Marcy Wheeler notes, “this is at least the third time this year that the US has delayed or denied entry to the US for Pakistani drone critics.”

Last May, I wrote about the amazing case of Muhammad Danish Qasim, a Pakistani student who produced a short film entitled “The Other Side”, which “revolves around the idea of assessing social, psychological and economical effects of drones on the people in tribal areas of Pakistan.” As he put it, “the film takes the audience very close to the damage caused by drone attacks” by humanizing the tragedy of civilian deaths and also documenting how those deaths are exploited by actual terrorists for recruitment purposes.
Qasim and his co-producers were chosen as the winner of the Audience Award for Best International Film at the 2012 National Film Festival For Talented Youth, held annually in Seattle, Washington. He intended to travel to the US to accept his award and discuss his film, but was twice denied a visa to enter the US, and thus was barred from making any appearances in the US.
The month prior, Shahzad Akbar – a Pakistani lawyer who represents drone victims in lawsuits against the US and the co-founder of the Pakistani human rights organization, Foundation for Fundamental Rights – was scheduled to speak at a conference on drones in Washington. He, too, was denied a visa, and the Obama administration relented only once an international outcry erupted.
There are two clear dynamics driving this. First, the US is eager to impose a price for effectively challenging its policies and to prevent the public – the domestic public, that is – from hearing critics with first-hand knowledge of the impact of those policies. As Wheeler asks, “Why is the government so afraid of Pakistanis explaining to Americans what the drone attacks look like from a Pakistani perspective?”
This form of intimidation is not confined to drone critics. Last April, Ireported on the serial harassment of Laura Poitras, the Oscar-nominated documentarian who produced two films – one from Iraq and the other from Yemen – that showed the views and perspectives of America’s adversaries in those countries. For four years, she was detained every single time she reentered the US, often having her reporters’ notebook and laptop copied and even seized. Although this all stopped once that article was published – demonstrating that there was never any legitimate purpose to it – that intimidation campaign against her imposed real limits on her work.
That is what this serial harassment of drone critics is intended to achieve. That is why a refusal to grant visas to prominent critics of US foreign policy was also a favorite tactic of the Bush administration.
Second, and probably even more insidious, this reflects the Obama administration’s view that critics of its drone policies are either terrorists or, at best, sympathetic to terrorists. Recall how the New York Times earlier this year – in an article describing a new report from the Bureau of Investigative Journalism documenting the targeting of Pakistani rescuers and funerals with US drones – granted anonymity to a “senior American counterterrorism official” to smear the Bureau’s journalists and its sources as wanting to “help al-Qaida succeed”.
For years, Bush officials and their supporters equated opposition to their foreign policies with support for the terrorists and a general hatred of and desire to harm the US. During the Obama presidency, many Democratic partisans have adopted the same lowly tactic with vigor.
That mindset is a major factor in this series of harassment of drone critics: namely, those who oppose the Obama administration’s use of drones are helping the terrorists and may even be terrorist sympathizers. It is that logic which would lead US officials to view Khan as some sort of national security threat by virtue of his political beliefs and perceive a need to drag him off a plane in order to detain and interrogate him about those views before allowing him entrance to the US.
What makes this most ironic is that the US loves to sermonize to the world about the need for open ideas and political debate. In April, Secretary of State Hillary Clinton lectured the planet on how “those societies that believe they can be closed to change, to ideas, cultures, and beliefs that are different from theirs, will find quickly that in our internet world they will be left behind,”
That she is part of the same government that seeks to punish and exclude filmmakers, students, lawyers, activists and politicians for the crime of opposing US policy is noticed and remarked upon everywhere in the world other than in the US. That demonstrates the success of these efforts: they are designed, above all else, to ensure that the American citizenry does not become exposed to effective critics of what the US is doing in the world.

Donate
By Rise Up TimesPublished On: November 5th, 2012Comments Off on Glenn Greenwald> US detention of Imran Khan part of trend to harass anti-drone advocates