“We begin history here in 1820,” John Anfinson said in a KFAI radio interview.

By Susu Jeffrey  Southside Pride   September 2012
Chief of natural and cultural resources for the National Park Service (NPS), Anfinson is the architect of the Coldwater Park redux. 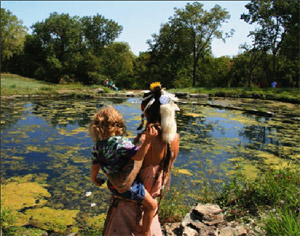 In 1820, U.S. soldiers took possession of Coldwater Springs and harvested limestone out of the Mississippi gorge to build Fort Snelling. They harvested oaks for firewood.

Dakota people showed Mni Owe Sni (water-spring-cold) to Lt. Col. Henry Leavenworth, who had lost 20% of his troops the previous winter due to unsanitary practices at their camp on the Minnesota side of the confluence.
The Dakota welcomed soldiers who would buffer Anishinabe threats and allow Dakota people to trade for guns and other European goods. “It’s like bringing Walmart in,” a Dakota man said. Coldwater furnished water to Fort Snelling for a century, from 1820 to 1920.
By the late 1830s, the army was forcibly evicting Swiss, French, Canadian, Irish, English and African pioneers, as well as Native Americans from the fort in order to preserve firewood and game. The Whiskey Wars and settler pressure were threatening fur trade profits.
We don’t know if Indian people were at Coldwater “because they didn’t write down their stories,” Anfinson told a Coldwater tour group in November 2011. The following month NPS contractors clear cut most of Coldwater from the spring north to the park entrance and west to Highway 55 and the rail transit line—except the ash trees. Already there’s an emerald ash borer infestation at Fort Snelling.
NPS was appointed to manage the Coldwater property in January 2010. Coldwater supporters were thrilled with the plan to remove the old Bureau of Mines buildings and roads and return the land to park space. Anfinson spoke of planting “thousands” of oaks.
Park planners apparently forgot that the area immediately around Coldwater Spring House and reservoir is “Airport Safety Zone A,” where “no new trees” are permitted. The NE-SW flyway is directly above Coldwater. Federal Aviation Administration rules and maps were included in the 2006 draft Environmental Impact Statement and repeated in the 2009 final EIS.
Park officials announced they would restore Coldwater as a prairie landscape, because that would be faster and cheaper than growing a blufftop oak grove. Coldwater is in Minnesota’s deciduous Eastern Broadleaf Forest Province. The prairie landscape firm now under contract uses “a lot of Roundup. We just spray it and kill everything.”
Mendota Dakota people speak of the traditional use of fire to clear unwanted vegetation, a non-toxic, fertilizing practice. NPS chose the industrial model of simultaneously clearing and flattening the land with its $3-million federal appropriation. Now the park service is asking for donations to plant trees.
Forever Sacred
The Minnesota Historical Society supports the Dakota claim of Coldwater as a traditional sacred site. In April 2010, Deputy state historic preservation officer Britta Bloomberg wrote to local NPS superintendent Paul Labovitz: “Our staff has reviewed the ethnographic resources study prepared by your cultural resources consultant (June 2006) and are in agreement with their findings that the site does quality as a TCP (Traditional Cultural Property).
“We were surprised that the National Park Service has disagreed with this determination … In addition, we have some concerns regarding the extent and nature of future land restoration and landscape modification for this site.”
Anishinabe spiritual elder Eddie Benton Benais called Coldwater “forever sacred” in his 1999 court-ordered testimony. Speaking specifically about the land between Minnehaha Falls and Coldwater Springs, Benais said his grandfather remembered traveling from northern Wisconsin “by foot, by horse, by canoe to this great place to where there would be these great religious, spiritual events. And that they always camped between the falls and the sacred water place.”
“The place where these two rivers joined was a sacred meeting ground for the Dakota Bands,” Rhoda Gilman wrote in her 1989 classic, “The Story of Minnesota’s Past.” “There they held dances, ceremonies, councils, and contests,” she continued.
“The place where the Minnesota River meets the Mississippi River was called ‘Makoce Cokaya Kin’ by the Mdewakanton Dakota Indians, meaning ‘Center of the Earth.’ The area is sacred to the Dakota,” according to a River Rides ad quoting the NPS.
Jim Redsky Anderson, chairman of the (non-federally recognized) Mendota Mdewakanton Dakota Community, calls the meeting of waters region “our Garden of Eden.”
In 2006, the Lower Sioux Indian Community Council in Morton, Minn., a federally recognized tribe, declared “Coldwater Springs and the land that surrounds it” to be a Traditional Cultural Property and “sacred.” Anfinson said the Coldwater TCP status applies only to the Lower Sioux community, not all Dakota or other Indian people.
In 1805, the Dakota signed a treaty with Lt. Zebulon Pike for land to establish military posts from below the confluence of the Minnesota and Mississippi rivers, upriver to the falls now called St. Anthony. The Dakota retain the rights to “pass, repass, hunt or make other uses of the said districts, as they have formerly done….”
_________________
To see the slide show about Coldwater and to sign an online petition to support Traditional Cultural Property/Sacred Site status for Native Americans at Coldwater Springs go the www.FriendsofColdwater.org.
A half-hour Coldwater radio documentary produced at KFAI-FM can also be heard at www.FriendsofColdwater.org.

Donate
By Rise Up TimesPublished On: September 20th, 2012Comments Off on Susu Jeffrey> Coldwater: The new history