Excuse me if I don’t join in Democrats’ sycophantic cheerleading for an Obama presidency that has shredded laws and liberties. 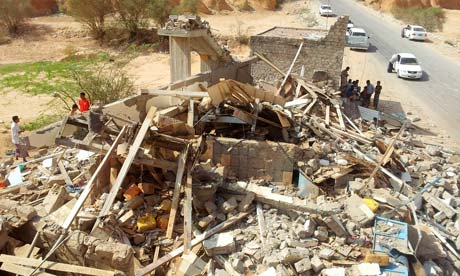 A US drone strike in eastern Yemen on Sunday was claimed by a security official to have killed six suspected Islamist militants. The Yemeni government has contradicted this, saying the intended target was ‘completely missed’, and 13 civilians were killed instead.
Photograph: Reuters
(updated below)
For several decades, protection of whistleblowers has been a core political value for Democrats, at least for progressives. Daniel Ellsberg has long been viewed by liberals as an American hero for his disclosure of the top secret Pentagon Papers. In 2008, candidate Obama hailed whistleblowing as “acts of courage and patriotism”, which “should be encouraged rather than stifled as they have been during the Bush administration”.
President Obama, however, has waged the most aggressive and vindictive assault on whistleblowers of any president in American history, as even political magazines generally supportive of him have recognized and condemned. One might think that, as the party’s faithful gather to celebrate the greatness of this leader, this fact would be a minor problem, a source of some tension between Obama and his hardest-core supporters, perhaps even some embarrassment. One would be wrong.
Far from shying away from this record of persecuting whistleblowers, the Obama campaign is proudly boasting of it. A so-called “Truth Team” of the Obama/Biden 2012 campaign issued a document responding to allegations that the Obama White House has leaked classified information in order to glorify the president:

Here is what they said:

Leave aside that this is a total nonsequitur: the fact that Obama has persecuted whistleblowers hardly negates, or even pertains to, the charge that he has leaked classified information when doing so benefits him politically. Indeed, that’s precisely what makes his behavior so pernicious: that his administration exploits secrecy laws to punish those who expose high-level wrongdoing while leaking at will for political gain.

More remarkable is that a Democratic presidential candidate is sticking his chest out and proudly touting that he has tried to imprison more whistleblowers on espionage charges than all previous presidents in history combined: more than the secrecy-loving Bush/Cheney White House, more than the paranoid, leak-hating Nixon administration, more than anyone in American history. Just contrast the script Democrats now read from to the one they pretended to believe in, in 2008; from the Obama/Biden campaign’s official Document for Change:

This tracks perfectly with what Mother Jones’ Adam Serwer adeptly documented Tuesday is the radical transformation in the Democratic party platform from 2008, when they feigned concern with civil liberties, to the 2012 platform, when Obama’s record makes it impossible (and politically unhelpful) to pretend any longer. Rather than object to what Obama is doing with the power he has been vested is the exact opposite of what they claimed they believed four years ago, Democratic loyalists simply shift like the wind as their leader does, without even seeming to recognize that they are doing so.

This is the same mentality that causes Democrats to cheer wildly for their leader the day after things like this happen, as just did on Sunday:

There will be no mention of any of that during the Democratic National Convention this week – unless it is to cheer for it wildly. Indeed, here’s how the Washington Post Wednesday morning characterized the ceremonies taking place right now in North Carolina:

Democrats will spend the week raucously applauding the violence and killing continuously unleashed by their strong, tough, resolute Democratic president – whom they’ll hail as their “commander-in-chief” whom we’re so blessed to be led by, even though most of them are not in the military and therefore, by definition, have no “commander”, chief or otherwise. And they will keep cheering for such acts even as the bodies of his latest innocent victims go unburied. And if any of this bothers any of us, we’ll be drowned out by stirring and deeply emotional tributes to the kindness and goodness of this great man, which will make all these unpleasant thoughts about the reality of his actions blissfully disappear.
As the Nation’s Jeremy Scahill, who has spent considerable time inYemen with the families of Obama’s drone victims, wrote last night on Twitter, as he watched all of this unfold: 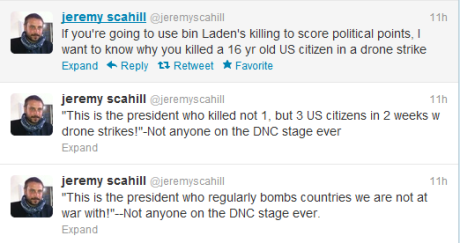 Persecuting and abusing whistleblowers. Indefinitely imprisoning people with no charges. Due process-free assassinations of citizens, even teenagers. Continuous killings of innocent people in multiple Muslim countries.

This isn’t just what Democrats do. It’s what they now boast about, what they campaign on, what they celebrate. That, as much as anything, is the Obama legacy.
* * * * *
UPDATE: A local TV reporter in Cincinnati, Ben Swann, interviewed President Obama today and — unlike virtually all national reporters — decided to challenge him on how it is that he believes he has the right to order even American citizens assassinated without due process, and specifically asked him about the killing of the American teeanger Abdulrahman Awlaki in Yemen. Obama’s response, needless to say, was to refuse to answer on the ground that it is all a big secret, but the imperiousness of this refusal can only be appreciated by watching the video:

Last year, ABC News’ Jake Tapper relentlessly asked White House press secretary Jay Carney similar questions, and if you haven’t seen that video, it’s really worth doing so to see how odious it is for the President to claim this most extremist power — to order people assassinated in secret — and then have to account to nobody for it.

Recall that “three dozen” — that’s “three dozen” — current and former Obama aides ran to the New York Times in May to heap praise on Obama’s supposedly judicious though resolute use ofdrones to vanquish America’s enemies. Recall, too, that he feels free openly to tell jokes about his use of drones to kill people.
But the minute he is confronted with real questions, he retreats — just like he does when his conduct is challenged in court — to claiming that it is all just too secret to permit any discussion of it whatsoever. In other words, The Most Transparent Administration Ever argues that which citizens the President chooses to kill and why is too secret to permit you to know anything about it (unless having you know about it can benefit him politically, in which case dozens of his aides will leak it).

Donate
By Rise Up TimesPublished On: September 8th, 2012Comments Off on Obama campaign brags about its whistleblower persecutions