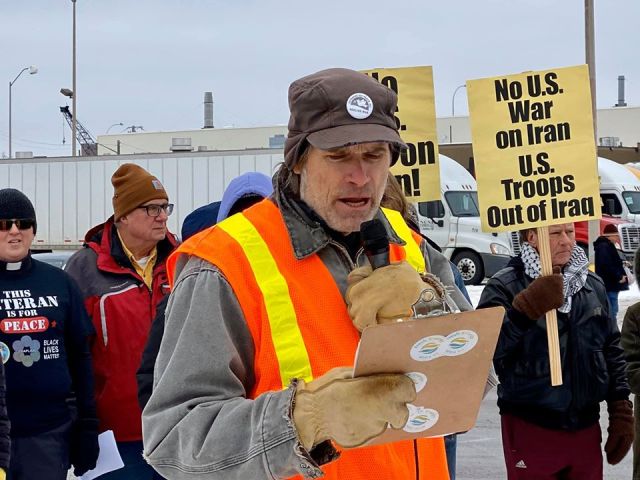 On January 25, 2020 Mike Madden gave the following speech at a protest of Trump’s actions in the assassination of Suleimani, inciting a possible war with Iran.

American bias in US media coverage* has been obvious for a long time:

So I had low expectations when I sat down to watch the PBS NewsHour in the days following the assassination of General Qassem Suleimani. Here’s a sample of what I heard:

And no PBS newscast is complete without comment from anonymous sources:

And just in case these descriptions were too subtle, PBS brought on Michael Doran of the Hudson Institute, which PBS simply described as “a think tank in Washington DC”.

A visit to the Hudson Institute website reveals additional information that might have been helpful to viewers. Their Vice President, Lewis ‘Scooter’ Libby, is a convicted felon. In addition to his convictions for perjury and obstruction of justice, Mr. Libby was Chief of Staff to the notorious war criminal and architect of torture, Dick Cheney.

Individual donors to the Hudson Institute include nice guys like Rupert Murdoch and Charles Koch. Their major corporate funders include Northrup Grumman, Lockheed Martin, and General Atomics, which just so happens to manufacture the Reaper Drone which delivered the missile that killed General Suleimani.

Conflict of interest? Not so much as to merit a mention from PBS.

So what about the substance of Michael Doran’s commentary?

I would say it carried all the nuance his paymasters would have expected. Here’s a sample;

It didn’t start with the attack on Qassem Suleimani. The Iranians have been escalating in a very deliberate fashion since last April… We have no choice now whatsoever. We’re under attack. This is war.

The Prime Minister is a lame duck. There’s a constitutional crisis in Iraq right now. Until we have a new government in place in Iraq, the statements he’s making don’t really matter. So the question isn’t what the Prime Minister is saying, or or what half of the parliament is saying. The question is what are we going to do about this direct attack on American forces, and there’s no choice here whatsoever. We have to demonstrate to the world they can’t treat us like this.

Iran is like a puffer fish. It looks powerful because of these militias, because of the precision guided weapons, and because of its boldness… It is behaving in this fashion in order to look much stronger than it is. We can best this adversary with relative ease

OK Mr. Doran. I get it. We have no choice whatsoever, and war with Iran will be a cakewalk with a puffer fish.

The Overton Window at PBS was established. The parameters of domestic debate allowed for disagreement as to the wisdom of the assassination, but all must agree that the victim had it coming.

And so it was for Iran as well. On day four of PBS coverage, the spectrum of domestic debate ranged from that of a Republican Congressman, Mike Gallagher of Wisconsin, to that of a Democratic Congressman, Jason Crow of Colorado. It was permissible for them to debate whether the assassination met the ‘imminence standard’, but there was no disagreement that Iran is an aggressor and a destabilizing force in the Middle East.

What made this PBS segment so depraved, the reason it can only be described as journalistic malpractice, is that both Congressmen, Gallagher and Crow, served as military officers during the 2003 US War in Iraq, and were introduced as such. Did it not occur to interviewer Judy Woodruff that the Iraq War might have been an act of aggression? That the United States might be a destabilizing force in the region?

I think it probably did. But when it comes to foreign policy, PBS is not an independent news outlet. It is a full fledged member of Team America.

*Editor’s note: Mike is referring here to the “mainstream corporate media,” which of course dominates the media in the USA.  Since PBS had its government funding significantly cut and has come to rely increasingly on corporate funding, much of their reporting has resulted in news coverage following the White House line instead of in-depth reporting of integrity.

← Peace on Earth. And in Colombia? by Meredith Aby Keirstead
The Women Fighting to Protect Yemen →