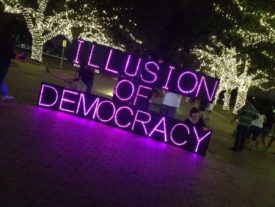 for the world, it’s dead serious, from the destruction of the environment and the growing threats of terminal nuclear war to a long list of other crimes and horrors.

The refrain of Russian attribution has been repeated so regularly and so emphatically that it’s become easy to forget that no one has ever truly proven the claim.

▶ John Kiriakou: CIA whistleblower says Edward Snowden would not get fair trial in US

I do not believe that he will get a fair trial in the United States, especially in the Eastern District of Virginia, where he’s being charged or where he has been charged. I think the deck is stacked against him, as it is against any whistleblower, and if the government has its way, Ed Snowden […]

John J. Dilulio, Jr: The Rise and Fall of the US Government

Congress is now controlled by politicians who raise money and win reelection by granting political favors to their supporters. For example, high-priced lobbyists for Wall Street first devised the deregulation that made too-big-to-fail banks possible, and then fashioned the faux financial fix-it legislation that followed the 2008 economic crisis. These new laws featured a “highly complex stew of new regulations” that could not be well implemented and “would likely not solve the underlying … problem even if they were.”

Glenn Greenwald: Cash, Weapons and Surveillance: the U.S. is a Key Party to Every Israeli Attack

The new Snowden documents illustrate a crucial fact: Israeli aggression would be impossible without the constant, lavish support and protection of the U.S. government, which is anything but a neutral, peace-brokering party in these attacks. And the relationship between the NSA and its partners on the one hand, and the Israeli spying agency on the […]

Lawrence Davidson: How the US Propaganda System Works

Americans are told that other governments practice censorship and propaganda, but not their own. Yet, the reality is quite different with many reasonable viewpoints marginalized and deceptive spin put on much that comes from officialdom. . . . By Lawrence Davidson  ConsortiumNews.com   May 9, 2014 Many Americans assume the U.S. government speaks “the truth” to […]

Click where it says “Watch on Vimeo” to see video.  Senator Dianne Feinstein’s condemnation of CIA spying marked both a low and high point for the U.S. government. Finally, someone in office is angry enough at the privacy violations occurring daily in the United States to publicly denounce a spy agency’s actions. Mark Fiore weighs […]

Diana Johnstone> The Good Intentions That Pave the Road to War

The Good Intentions That Pave the Road to War R2P and Genocide Prevention by DIANA JOHNSTONE  Counterpunch  WEEKEND EDITION FEBRUARY 1-3, 2013 Paris. Opposing genocide has become a sort of cottage industry in the United States. Everywhere, “genocide studies” are cropping up in universities.  Five years ago, an unlikely “Genocide Prevention Task Force” was set […]