Chomsky: Trump’s Actions on Syria Reflect the Foreign Policy of a Con Man

Trump is an effective con man who has a good sense of what animates his voting base. …that withdrawing a few hundred troops would appeal to the sector of the population that resonates to his message that America is foolishly expending its blood and treasure to help “unworthy” people…

October 13, 2019 · by Rise Up Times · in Activism, International, violence against women, women's rights · Leave a comment

Haiti: 4 More Dead in Longest Bout Of Protests Against President Telesur  October 12, 2019 So far, around 17 people have died and almost two hundred have been injured in the month-long protests. At least four people have died and dozens were injured between Friday and Saturday in strong protests in Port-au-Prince, Haiti, after police used tear gas to […]

Chris Hedges, On Contact: The Uncivil War on Syria with Max Blumenthal and Ben Norton

Discussing the US role in the Syrian conflict.

Seymour Hersh: What Really Led to the Killing of Osama bin Laden

“When your version comes out — if you do it — people in Pakistan will be tremendously grateful,” Durrani told me. “For a long time people have stopped trusting what comes out about bin Laden from the official mouths. There will be some negative political comment and some anger, but people like to be told the truth, and what you’ve told me is essentially what I have heard from former colleagues who have been on a fact finding mission since this episode.”

Horror Beyond Description: Noam Chomsky on the Latest Phase of the War on Terror

Chomsky: One informative discussion, in Business Week (Feb. 12, 1949), recognized that social spending could have the same “pump-priming” effect as military spending, but pointed out that for businessmen, “there’s a tremendous social and economic difference between welfare pump-priming and military pump-priming.” The latter “doesn’t really alter the structure of the economy.” For the businessman, it’s just another order. But welfare and public works spending “does alter the economy. It makes new channels of its own. It creates new institutions. It redistributes income.” And we can add more. Military spending scarcely involves the public, but social spending does, and has a democratizing effect.

Noam Chomsky: My Hopes for the Future

Destruction of ISIS by any means that can be imagined might lay the basis for something worse, as has been happening quite regularly with military intervention. The state system in the region imposed by French and British imperial might after World War I, with little concern for the populations under their control, is unraveling. 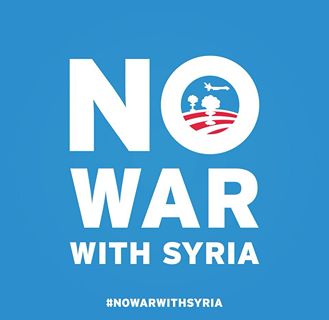 In the wake of Turkey’s intentional downing of a Russian jet over Syrian airspace it appears the wrong lessons are being learned. Instead of greater cooperation to fight terrorism, we see the US doubling down on its failed policy. Events are spinning out of control as Syria turns into a battleground for military forces locked […]

Van Auken: The NATO ministers, including US Defense Secretary Ashton Carter, seized upon Moscow’s airstrikes in Syria against Islamist militias seeking the overthrow of the government of President Bashar al-Assad as the pretext for more aggressive deployments of military forces on Russia’s border.

Bello: Yes, these people are refugees. People who are not safe in their homes, who live in countries which no longer have untainted water supplies and where economic “opportunities” are either nonexistent or too dangerous to pursue are refugees.

No one knows what the future holds for Syria or its children, so Gross feels that helping these kids process their emotions now is especially important. “It wasn’t like going on vacation in a strange place where you expect to be misunderstood, to have a few struggles and then to return to your own bed. […]

Ray McGovern: How War on Syria Lost Its Way

September 16, 2013 · by Rise Up Times · in Military Madness, Peacemaking · Leave a comment

Exclusive: What looked like another U.S. march to war in the Mideast has turned toward a peaceful accord that carries hope of getting Syria to relinquish its chemical weapons and achieving a cease-fire, maybe even an end to the civil war. But some want to resume the drive toward a U.S. attack, ex-CIA analyst Ray McGovern says. By […]

Noam Chomsky: Who Owns the Earth?

A minor event, but it forcefully brought home a lesson: The legitimacy of borders – of states, for that matter – is at best conditional and temporary. By Noam Chomsky  05 July 2013  Truthout | Op-Ed (Photo: Michael Kamber / The New York Times)  (This article is adapted from a commencement speech by Noam Chomsky on June 14, […]

Professor Noam Chomsky speaking at Boğaziçi University in Turkey in January 2013 Malcolm Steinberg posted in CounterPunch Friends and Supporters WHY DOES THE U.S. SUPPORT ISRAEL? Noam Chomsky has the best explanation I’ve heard… load this video up, go to the 38min45sec spot and the tale begins —-> https://www.youtube.com/watch?v=MEYiGamLZSo This video is the full speech, […]

U.S. Predator spy drone shot down by Kurd rebels in Turkey, near Iraq

U.S. Predator spy drone shot down by Kurd rebels in Turkey, near Iraq Posted by David Cenciotti in Drones  September 20, 2012 Pictures of the wreckage of a U.S. Air Force MQ-1 Predator drone shot down in Turkey were released by the Kurdish Firat News Agency on Sept. 19. The spy robot was shot down by the […]

Excerpt from Professor Noam Chomsky’s UCL Rickman Godlee Lecture 2011 — Contours of global order: Domination, stability, security in a changing world Further information: http://blogs.ucl.ac.uk/events/2011/03/14/an-evening-with-noam-chomsky-contour&#8230; Uploaded by HousekaterClaudio on Oct 18, 2011 You may subscribe to WAMMToday from this blog website.  WAMMToday is now on Facebook!   Check the WAMMToday page for posts from this blog and more! […]