The occupation of the Palestinian territory may be one of the most well-documented situations,… with…experts alleging that violations of international humanitarian and human rights law have occurred.

Gazans Were “Grass to Be Mowed” Again, But Their Roots Remain Strong

In tragedy, Palestinians’ will to live is not defeated: Instead, the roots of Palestinian identity grow stronger. 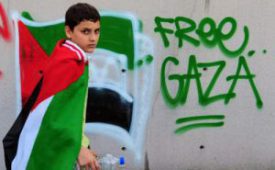 On a Sunday afternoon in November, Dr. Mona El-Farra spoke with an audience in Minneapolis via Skype from Manchester, England,

I think that this is what this attack has shown, is that while most of the political and militant leadership of the Palestinians has been assassinated in the last century, or is imprisoned, even though there isn’t a way for Palestinians to actually unite because they’re divided in bantustans all over the West Bank, in Gaza, and all over Israel, even though they are separated by a complex matrix of control of IDs and live under extreme discrimination inside of Israel, they will still continue to resist until they have freedom.

Blumenthal: So the Dahiya doctrine aims to, by attacking civilians, aims to demoralize the civilian population until they assent to the West Bank model. And the people in the Gaza Strip are incredibly resilient. They almost unanimously support resisting the occupation.

Peter Hart: How to Decode the New York Times

The New York Times muddies the waters about the deaths of the three Israeli teens that started the recent attacks on Gaza by Palestine… By Peter Hart  FAIR.org  September 5, 2014    It is, by many accounts, the action that caused the most recent war in Gaza: the kidnapping and murder of three young Israelis […]

“Our terror is delivered to the wretched of the earth with industrial weapons. It is, to us, invisible. We do not stand over the decapitated and eviscerated bodies left behind on city and village streets by our missiles, drones and fighter jets. We do not listen to the wails and shrieks of parents embracing the […] 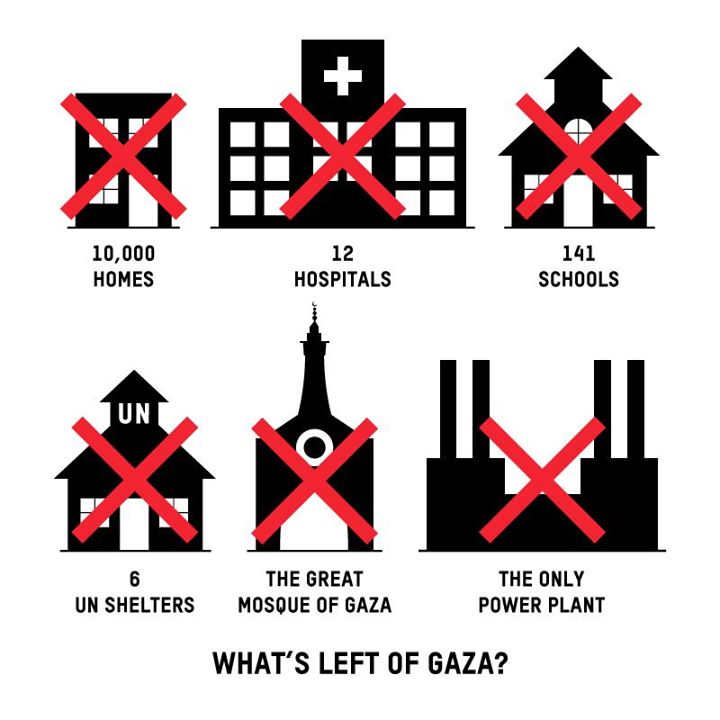 Israel’s truce with Hamas held for a second day Friday, as talks continued between the government of Prime Minister Binyamin Netanyahu and all three main Palestinian factions—including Fatah and Islamic Jihad. By Chris Marsden  wsws.org  16 August 2014 The talks, mediated by Egypt, have produced statements from all three Palestinian groups claiming that a breakthrough […]

Noam Chomsky: The Nightmare in Gaza

“There is no place in the prison of Gaza safe from Israeli sadism.” By Noam Chomsky  AlterNet  09 August 14  ReaderSupportedNews.org Amid all the horrors unfolding in the latest Israeli offensive in Gaza, Israel’s goal is simple: quiet-for-quiet, a return to the norm. For the West Bank, the norm is that Israel continues its illegal […]

▶Truthdigger of the Week: Navi Pillay

“…the voice of the victim everywhere” The lawmakers criticizing Pillay for attempting to do her job represent a government entangled with the interests of multinational business, including and especially purveyors of Middle Eastern oil. United Nations High Commissioner for Human Rights Navi Pillay visits South Sudan in April. AP/UNMISS By Alexander Reed Kelly  truthdig.com  August […]

Noam Chomsky: For Gaza, ‘The Norm’ Is Devastating

‘We have no dignity, no pride; we are just soft targets, and we are very cheap. Either this situation really improves or it is better to just die.’ With its latest offensive, Israel’s objective is simple: to return to the status quo. An IDF paratrooper takes aim in Gaza as part of Israel’s Operation Protective […]

David Swanson: If a Genocide Falls in the Forest

Glenn Greenwald: Cash, Weapons and Surveillance: the U.S. is a Key Party to Every Israeli Attack

The new Snowden documents illustrate a crucial fact: Israeli aggression would be impossible without the constant, lavish support and protection of the U.S. government, which is anything but a neutral, peace-brokering party in these attacks. And the relationship between the NSA and its partners on the one hand, and the Israeli spying agency on the […]

Ed Felien: Gaza and Israel, A Bit of History, Today, and A Response

BY ED FELIEN  Southside Pride  August 4, 2014 Gaza has been Arab since the dawn of civilization.  The city of Gaza was the home of the Philistines at the time of Moses.  It was an Egyptian city with an Egyptian religion and social customs.  According to the Torah the Arabs wouldn’t let the Jews pass […]

▶ Mads Gilbert: Gaza crisis is a ‘major defeat’ for humanity

Al Arabiya   1 August 2014 Mads Gilbert, a Norwegian surgeon volunteering at a Gaza hospital, called the conflict a “major defeat for the development of humanity,” in an interview with Al Arabiya News Channel. Gilbert practices in Gaza’s al-Shifa’a Hospital, where he and Palestinian medical personnel have worked to save the lives of hundreds of […]

▶ Jon Snow makes heartfelt plea for the children of Gaza

The journalist and broadcaster recounts his time reporting from Gaza, and draws attention to the innocent lives lost during the conflict Telegraph  27 Jul 2014 Channel 4 broadcaster Jon Snow has spoken about his recent visit to Gaza, where he witnessed the harsh realities for many of the Palestinian children living in the strip. Subscribe […]

A member of the Israeli group ‘Breaking the Silence’ has published accounts of Israeli soldiers being authorized by their commanders to carry out revenge attacks against civilians in the Gaza Strip “to enable the soldiers to take out their frustrations and pain at losing their fellow soldiers”.  by Celine Hagbard  IMEMC News  July 29, 2014 […]

Noor Harazeen reports from, Gaza City, Palestine. 53 Palestinians killed, 15 of them are children under the age of 17, over 450 injured. (Numbers represent time since beginning of ‘Operation Protective Edge’ till the 9th. Does not include the number of dead and injured in tonight’s bombing raids which are happening now.)  via Revolution News Facebook […]

Where’s our humanity for Gaza?  “The Gaza Strip is now in its 46th year of occupation, 22nd year of closure, and sixth year of intensified closure.” By Sara Roy |  GLOBE CORRESPONDENT NOVEMBER 23, 2012  Boston Globe A young Palestinian boy carries a bag with scavenged plastic in a dump outside Gaza City earlier this month. […]