On Sunday, September 4, 2022, the movement for social change in Chile suffered a massive setback. The new constitution, submitted to a national referendum, was rejected by 62 percent of the voters, with 86 percent of eligible voters casting a ballot. The new constitution was defeated in all 16 regions of the country (divisions similar to states in the U.S.), and in 338 of the 346 communes, which are similar to our counties within each state.

The road to rejection started on October 18, 2019, when mass protests broke out in the entire country. The protests focused on three crucial problems faced by Chileans: education, pensions, and healthcare. The root problem, however, was the political-economic system enshrined in the Chilean constitution, a constitution that was written by the dictator General Augusto Pinochet before he was forced from power in 1990. Under Pinochet, the capitalist elite was given free rein in Chile, following the economic philosophy of U.S. economist Milton Friedman and his Chicago Boys (named for the University of Chicago, where most of these Chileans had gone to graduate school). The Chicago Boys created a version of capitalism known as neoliberalism that has since been imposed on many countries of the world, especially in Latin America.

Under the neoliberal policies of the Pinochet dictatorship the pension system was privatized, health care was privatized, and public education was defunded and semi-privatized with a system of charter schools. These policies were written into the constitution of Chile by Pinochet and remained in effect even through the transition to democracy in 1990, making  it difficult for subsequent presidents and congress to alter these policies which were essentially outside of the power of the government to change. Chile had what the Chileans called a “subsidiary state model”—a government that was subsidiary to the interests of capital. At the root of the October 2019 mass movement was the call to change the constitution so that the Chilean people could improve the systems that directly affecttheir lives.

The proposed constitution was long, coming in at over 180 pages. The document contained 388 articles and over 100 kinds of rights. They ranged from the profound, such as abortion rights, strong environmental protections, and strong worker and union protections, to the mundane, such as the right to internet access and the right to culturally appropriate diets, and they were all mixed in together. The variety of issues and length of the document made it difficult to understand and easy to mischaracterize. It was not a socialist constitution. It did not take away people’s rights to their pension or their homes (as right-wing propaganda claimed). It did, however, threaten neoliberal capitalism and the power of the ruling elites. Ultimately, the constitution was more democratic, more pro-working people, and more pro-environment than the previous constitution and most recent constitutions. Take, for instance, the article on protecting water, air, and other elements of the commons:

Every person, natural or juridical, has the right to property in all its species and over all goods. Exceptions are those goods that nature has made common to all persons and that the constitution or the law declares cannot be appropriated, such as water and air.

The law shall determine the manner of acquiring property, its content, limits, and duties, in accordance with its social and ecological function.

The proposed constitution also reduced the power of the Chilean Senate, a less democratic body than the Chilean Chamber of Deputies and a bastion of ruling class power.

So, while the constitution was overly long, hard to grasp, and had some frivolous features, it was ultimately a very democratic document.

The constitutional convention was dominated by the left, who made up about two thirds of the delegates. The right and far right had about one-third of the seats. Some of the left-wing delegates were politically inexperienced, and a few were outright opportunists. Three events on the left caused scandal: as part of his election campaign, one of the delegates claimed he had cancer—he did not; a female delegate took off her shirt during the convention and gave a speech naked from the waist up; and a male delegate did not show up for the convention and once voted from his shower—he was asked to turn off a video, which he had not done. These events were well publicized and served the needs of the right wing to delegitimize the whole campaign process.

The right-wing delegates tended to be politically experienced and well-connected to corporate and political elites. The political inexperience of the majority of left-wing delegates made it hard for them to craft a concise, clear document and involved some individual missteps along the way that hurt the legitimacy of the process and, as a result, the people who wanted a new constitution.

While the process was flawed, the main reason for the failure of the constitution was the massive propaganda campaign launched against it. The right wing spent twice as much as the pro-constitution forces and flooded the print and electronic media with propaganda. It was not just the money that mattered, although it did. It was also who controlled the media. Two media conglomerates own 90 percent of the print media in Chile: El Mercurio Group and Copesa. These conglomerates are, in turn, owned by two of the Ten Families that hold much of Chile’s wealth, the Edwards family (which owns the Mercurio Group, banks, real estate, and mines) and the Saieh family, whose head, Alvaro Saieh, is the fourth richest person in Chile and the 729th richest person in the world. 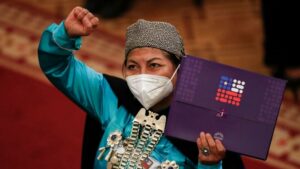 A Mapuche woman shows enthusiasn for a progressive new Chilean constitution last July. Due to a vigorous propaganda campaign to defeat even the Mapuche voted against it in September.

A third crucial factor was the provisions for a plurinational state in which indigenous peoples are recognized as members of distinct nations with autonomous governments. Many Chileans, including native peoples, opposed the creation of parallel judicial systems for different nationalities. A poll of voters who were Mapuche, the largest indigenous group in Chile, showed that only 24 percent of them favored this provision. Instead, they wanted equal protection under the law and an end to the killing and political repression of Mapuche activists by government forces. This repression was common under the previous right-wing government of Sebastian Piñera and has continued under the left-wing government of Boric.

Immediately after the vote to reject, three things happened. First, President Boric shuffled his cabinet, removing some of his closest advisors and replacing them with more moderate political figures. This lurch from the left to the center happened within days. Second, the right-wing political parties claimed a great victory, which indeed they had achieved: The neoliberal order that benefitted the Ten Families (the 10 richest extended families in Chile that control most of the country’s wealth) and transnational corporations was saved, at least for the time being. And third, the government and progressive social forces started to plan a way forward to a new constitution.

While the right-wing political forces are emboldened and the progressive forces are searching for a way forward, we do not know what effect this defeat will have on the masses of the Chilean people. The Boric government is trying to restart a new process of constitutional reform, but as of this writing the right-wing political forces in the Chilean Senate and Chamber of Deputies are blocking all proposals. In addition, the Boric government has been weakened and the disapproval rating for Boric has climbed from 20 percent disapproval when he took office to 56 percent disapproval. Many fear that Boric will essentially be a lame duck for his remaining three and a half years in office. While he may recover politically, the true answer as to what comes next will be given by the majority of Chileans, who are still suffering from the neoliberal capitalist state.

Michael Livingston is a professor of psychology at St. John’s University/St. Benedict College in Minnesota.  He is an antiwar and anti-interventionist activist in the U.S. He has worked and lived in Chile, Spain, and Honduras and has written for the WAMM newsletter on related topics. 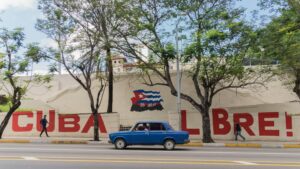 By Jerris Heckler and Kim DeFranco, members of the WAMM Solidarity Committee on the Americas

The Solidarity Committee on the Americas has been working with the Saving Lives Campaign (SLC). The campaign was developed through the U.S.- based National Network on Cuba and Canadian Network on Cuba. It launched as a collaboration between the United States, Canada, and Cuba to combat the devastating effects of the U.S. blockade of Cuba.

Our country has been at war with Cuba, either directly or indirectly since 1898. Since Cuba first gained its independence from U.S. military rule in 1902, it has been a target.

This was especially the case after the U.S. attempt to invade Cuba – known as the Bay of Pigs Invasion, the failed landing operation on the coast of Cuba in 1961, conducted by Cuban exiles working for the U.S. who opposed Fidel Castro’s Cuban revolution. In 1962, President John F. Kennedy proclaimed a comprehensive embargo on trade with Cuba, in response to certain actions taken by the Cuban government and its leaders, even though the government of Cuba made lives better for its people. Kennedy directed the U.S. Departments of Commerce and Treasury to implement the embargo, which remains in place today.

Despite the 60-year U.S. blockade on Cuba, the island-nation has a unique healthcare system free of charge to everyone. It focuses on prevention. Cuba has also sent doctors, nurses, and medical brigades all over the world to provide medical care and aid to people in countries in need.

Despite all the remarkable things Cuba has been able to do, it needs more humanitarian and medical supplies. In April 2021, the Saving Lives Campaign implemented the Saving Lives Syringe Campaign. Along with contributions nationally and from around the world, the campaign was able to send eight 40-foot containers containing six million syringes to Cuba, as well as four 40-foot containers of personal protective equipment (PPE) to support Cuba’s frontline health-care workers. These vital medical supplies were sent through Global Health Partners, a member of the National Network on Cuba.

In June 2022, Saving Lives initiated a new campaign to combat a dire need – obtaining anesthesia machines. Calixto Garcia Hospital is a leading trauma facility with 23 operating rooms and only two working anesthesia machines. Surgeries are delayed and doctors must make critical decisions about which Cuban citizens get care. The call went out to raise $125,000 for three anesthesia machines, sutures, and other important medical supplies such as artificial limbs. Due to U.S. sanctions on Cuba and its limited ability to obtain parts, it was imperative for Cuban doctors and Saving Lives organizers to identify a specific type of anesthesia machine that Cuba will be able to both maintain and repair.

Saving Lives representatives have been able to procure $150,000 of in-kind medical supplies from medical organizations and facilities around the U.S. At the same time, due to the blockade, Cuba continues to be faced with a desperate need for medical supplies and medicines for its people. The Saving Lives Campaign is hopeful that the money for the anesthesia machines and other medical supplies will be obtained soon. Global Health Partners is responsible for the campaign on behalf of Saving Lives and has obtained the necessary Commerce Department export licenses.

Moreinformation through Global Health Partners at this website:
ghpartners.org/cuba2022
or the Saving Lives Campaign at: savinglivescampaign.org.