When the New York City Department of Emergency Management issued a 90-second public service announcement about how to survive a nuclear attack, people thought it was some sort of joke or parody, but it wasn’t. It was a serious announcement. * 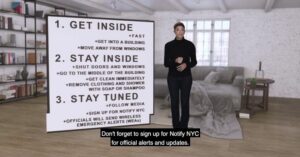 *A screenshot of a public service announcement issued by the New York City Department of Emergency Management about how to survive a nuclear attack.

What to Do in Case of a Nuclear Attack

Kristin Dooley, the director of Women Against Military Madness responded, “Let’s examine how to survive a nuclear attack in New York City, as advised. The announcement begins:

‘You, your friends, your family…’

Sorry, your bodies have been vaporized, there is NO you and yours.

And continues: ‘…get inside.’

All buildings have been demolished, there is NO inside.

‘Remove clothing and shower with soap or shampoo’

Everything has been demolished. There is NO water, soap or shampoo.

Oops! Media has been wiped out. There is NO media to follow.

According to New York City’s Mayor Eric Adams, “It’s any natural disaster. Pack a bag. Know where your medicines are located. These are just smart things to do.” **

Kristin Dooley concludes:: “No, Mayor Adams, they’re not.
And P.S. a nuclear attack is not a natural disaster.”

The Nuclear Triad and Treaties: a Death or Life Struggle

Intro: [WAMM Newsletter Editor] The nuclear weapons with the highest amount of destructive power, the ones that can lead to the end to life on earth, are referred to as the Nuclear Triad. They can launch from land “combat ready”, from sea “always on patrol,” and from air “capable of providing massive firepower in a short time anywhere on the globe.” The U.S. Department of Defense informs us that the triad consists of 400 land-based intercontinental ballistic missiles (ICBMs), 14 ballistic missile submarines (SSBNs) armed with 240 280? submarine-launched ballistic missiles (SLBMs), and 45 heavy bombers (B-52s) and 20 stealth bombers (B2s) [1]

These weapons are held partially in check by the New Strategic Arms Treaty (New START) negotiated in 2018 between the U.S. and the Russian Federation, which together own 90 percent of the world’s nuclear weapons.

So – as of now, the number of these weapons is fixed, but “modernizing” the aging systems is in progress. Antinuclear activists are working to abolish them altogether.

The current Minuteman-3 ICBMs are 50 years old and deteriorating significantly, so the U.S. Air Force decided on new missiles instead of upgrading the old.  The new missiles (Ground-Based Strategic Deterrent) are named “Sentinel.”  They are due to become operational in 2029 with 400 in place by 2036.[2]  An initial outlay of $100 billion goes to Northrop Grumman, which has some people in Utah cheering because it means 10,000 jobs for a new production facility there.  The other two legs of the Triad (subs and bombers) are also being upgraded to provide national security deterrence for decades in the future.

The International Campaign to Abolish Nuclear Weapons (ICAN) is moving ahead with its purpose: promoting the Treaty on the Prohibition of Nuclear Weapons (TPNW) that was adopted by the United Nations in 2017. [3] At a conference in Vienna in June,ICAN announced that 66 countries have now ratified the treaty with eight more in line soon. The 652 organizations who are a part of the treaty are working to educate people and promote the treaty. [Women Against Military Madness was one of the first 25 such organizations to sign up.]

The UN’s Nonproliferation Treaty (NPT) [4], which went into force in 1970 and was extended indefinitely in 1995, conducts a review every five years. Itdoes advocate disarmament as well as non-proliferation, but nations had done little to disarm.Now, the Arms Control Association, which works on support of arms control policy,intends to demand actual disarmament at the NPT conference this August,according to the association director Daryl Kimball. 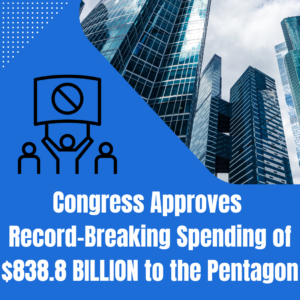 However, the nine nuclear nations [the U.S., the UK, Israel, France, Russia, China, Pakistan, India, North Korea] show no sign of disarmament, and Russia, China, and North Korea are modernizingtheir nuclear forces, in addition to the U.S. modernizing its own. China is expected to double its ICBMs from 300 to 600, and North Korea may increase its ICBMs from 40 to more than 150 in the next decade. Both these countries will have plenty of missiles to target cities in the U.S. mainland, as we can target theirs.

While the death wish of the nuclear race continues, antinuclear advocates work for the life of humanity.  (WAMM Editor)

Jay Kvale is a member of the WAMM End War Committee.

The Intermediate Nuclear Weapons Treaty (INF), created under pressure from a mass anti-nuclear movement,[i]required the elimination in Europe of ground-based intermediate-range missiles (GBIRMs) that could reach 500 km (310 miles) to 5,500 km (3,417 miles). Just four years later 2,692 missiles had been destroyed and “an entire category of weapons” [ii] ceased to exist.

The treaty was cancelled in 2019. Christian Sorensen, in his 2020 book Understanding the War Industry, offered this background: “War corporations loathed the INF Treaty as there is much money to be made in the development, sale, deployment, maintenance, and upgrade of short- and intermediate-range land-based missiles and missile launchers…war corporations lobbied hard against it behind closed doors.”

Italian anti-nuclear, Stop NATO activist ManlioDinucci warns about U.S. plans to install GBIRMs in Europe. Also very concerning is thatLockheedMartin’s Aegis Ballistic Missile Defense Systems were installed by the U.S. in Romania and Poland and on warships in the Mediterranean, Black Sea, and Baltic Sea.[iii] 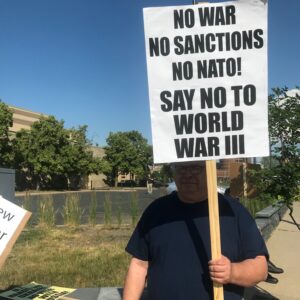 A section on the Lockheed Martin website called “The Heart of Aegis” proclaims that it was “designed as a total weapons system from detection to kill.”[iv]

Anti-missile shield systems sound benignly defensive, but they were designed with offensive capabilities as well, and can be used to launch missiles from land or sea. Dinuccidecries that they can be armed with nuclear warheads.[v]

He sounded the alarm: “Europe is thus being turned by the U.S. into the front line of a nuclear conformation with Russia…”[vi]

But as if establishing Europe as a nuclear arena is not enough, according to Sorensen, “the day after D.C. formally withdrew from the INF, [then] Secretary of War Mark Esper (former Raytheon vice president) said he was in favor of deploying ground-based missiles to the Far East.” Now Japan may host them.  This could place China within reach. Because of U.S. encroachment in the Pacific and the fact that Taiwan is part of One China, it’s not surprising then that Speaker of the House Nancy Pelosi, third in line for U.S. Commander in Chief, going to Taiwan in August is viewed by China as highly provocative, resulting in a show of force with live weapons by the Chinese military.

[i]ICAN statement regarding the collapse of the Intermediate-Range Nuclear Forces Treaty, Feb. 8, 2019. tinyurl.com/3efejrc9

[iii]Concerns about ground-based intermediate-ballistic missiles and ballistic missile defense system are addressed withinManlio Dinucci’s article,“The B61-12 Mini-nukes ‘made in America’ to be Used in a ‘Nuclear First Strike,’ Global  Research, July 15, 2022. tinyurl.com/munruz49

[iv]AEGIS Weapons Systems. The Heart of Aegis – Aegis: The Shield (and the Spear) of the Fleet. Lockhead Martin. tinyurl.com/yrbn3bfb

Tactical Nuclear Weapons: the Most Likely to Be Used

Nonstrategic nuclear weapons may be the most dangerous of all because they are the most likely to be used.[i] That’s because nonstrategic nuclear weapons are considered “tactical” weapons, designed for use against an adversary in limited warfare or “in support of the military commander’s scheme of maneuver” and they are not restricted by the New START treaty or any treaty, as strategic weapons are.[ii] With lower yield (explosive power) and a shorter range of reach, they can still have approximately three times the explosive power of the 15-kiloton bomb that the U.S. dropped on Hiroshima on August 6, 1945, destroying the Japanese city, and killing an estimated 135,000 of its inhabitants. 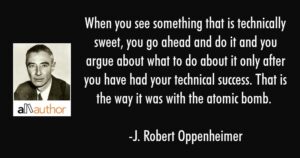 130 nonstrategic, tactical weapons are currently stored somewhere in the U.S., or in what it claims as its territories. The U.S. maintains another 100 of these weapons ­– referred to as B61s – in European states, meaning close to the target. These weapons are considered an important factor in “alliance cohesion,” bonding the U.S. with Europe in NATO, with Russia being the intended enemy target.[iii]

Modernization of B61 weapons began this year. Design and engineering were a joint project of Sandia National Laboratory, Boeing, and Los Alamos National Laboratory – where the first atomic bomb was developed.[iv]  The B61-12 was developed as a flexible nuclear weapon with optional levels of explosive power, supposed to be more user-friendly because of increased accuracy (which also makes it more likely to be used). 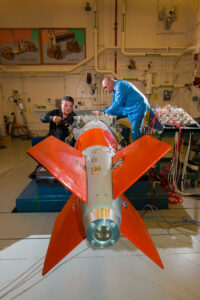 Engineers modernize the B-61-12, A tailfin was added to increase accuracy, supposedly reducing the prospect of “collateral damage” and political objections, but making it more likely to b used. Photo: Scandia National Laboratory

In the U.S./NATO proxy war with Russia over Ukraine, Russian President Vladmir Putin intimated that his country could use tactical nuclear weapons if Russia’s national survival is threatened. But do we hear about the provocative U.S./NATO combat training exercises involving simulated tactical nuclear strikes on Russia?  Nuclear Watch New Mexico reported in 2017, five years before the modernization of the B61-12 was finalized at Sandia National Laboratory, that a Russian defense source complained of such exercises in Russia’s northwest and the Baltic Sea, concerned that these exercises and the U.S. speeding up the B61-12 modernization was an indication of U.S./NATO testing a scenario for “limited nuclear war in Europe.”[v]

Why hasn’t more attention been paid to these extremely dangerous weapons that are the most likely to be used? The 2022 congressional research report to Congress speculates that “in contrast with the longer-range strategic nuclear weapons, these weapons had a lower profile in policy debates and arms control negotiations, possibly because they did not pose a direct threat to the continental United States.”[vi] In other words, who cares what we do to any other part of the world, as long as we’re safe? Of course, this ignores the facts that nuclear explosions’ effects don’t recognize manmade boundaries and that once even a few low-yield nuclear weapons are used in a localized war, it opens up the possibility of escalation.

[i] What are Tactical Nuclear Weapons?, Explainer, Union of Concerned Scientists, June 1, 2022

Also note: Russia is estimated to have 1,000 to 2,000 tactical nuclear weapons in its possession; they are estimated to have less explosive power than those in the U.S. and some may be on its southern borders, not near Europe. The Department of Defense believes that our country can more thancompensate for having fewer tactical weapons with thesuperior destructive power of our conventional or strategic warfighting weapons. Russia’s Nuclear Weapons: Doctrine, Forces and Modernization. Congressional Research Service. Updated April 21, 2022. tinyurl.com/4nhc85m2. India and Pakistan are also among the countries possessing tactical nuclear weapons, and an increase in tensions between them could mean that they are tempted to resort to their use. China has nonstrategic weapons, too.

[v]Controversy After Another Test of the B61-12 Nuclear Smart Bomb, Nuclear Watch New Mexico, September 23, 2017. tinyurl.com/yjv744tm