Peace does not come easily – unfortunately for the Afghan people, who continue to suffer.

The Long War and Its Aftermath – Afghanistan

To hear Western analysts, it might appear that the 20-year war on Afghanistan waged by the U.S. and its allies was a benign and beneficial effort to modernize the country, liberate Afghan women, and provide health care, education, and good jobs for the Afghan people, and that all this has been swept away by capitulation to the Taliban.  But the truth is that the U.S. spent $2.26 trillion on the war and the bulk of this sum went to maintaining the U.S. military occupation, dropping over 80,000 bombs and missiles on Afghans, paying private contractors, and transporting troops, weapons, and military equipment back and forth for 20 years.

Under pressure from the Biden administration, $460 million in funds allocated by the International Monetary Fund (IMF) that were scheduled to be sent to Afghanistan have been cancelled.  The U.S. and other Western nations have also halted humanitarian aid to Afghanistan.  After chairing a 67-nation summit on Afghanistan in August, UK Prime Minister Boris Johnson said that withholding aid and recognition provided sufficient leverage – “economic, political and diplomatic” – to affect Taliban policy.

Peace does not come easily – unfortunately for the Afghan people, who continue to suffer.

The U.S. war on Afghanistan has often been referred to as “the longest war,” but, in fact, Korea is the longest war. Although hostilities supposedly ended in 1953, a peace treaty was never signed to officially end the Korean War. Today, the U.S. maintains a military force of 28,500 personnel at bases in South Korea, as well as weaponry on land, air, and naval warships. The U.S. has also installed the THADD missile “defense” weapon system* in South Korea, which is regarded as a potentially offensive system by China. In addition, on the basis that North Korea has an arsenal of nuclear weapons, the U.S. has been leading a war of economic sanctions against North Korea, which impacts basic human needs of ordinary Koreans.

PM: Korea – The Longer War and Its Continuation

The San Francisco Chronicle of October 1st ran an interesting story about Kim Jong Un, the present-day leader of North Korea, and his nation’s newly developed anti-aircraft missile, which was fired in the fourth round of missile tests conducted within six months. At the same time, Kim has been pushing to renew conditional talks with Seoul, expressing his willingness to hold communication with South Korea.

According to the Korean Central News Agency, the official state media agency of North Korea, Kim said the restoration of border talks in early October would realize the Korean people’s wish for peace between the two Koreas.

Some experts say North Korea, in its quest to receive international recognition as a nuclear power, is pressuring South Korea to tone down its criticism of the missile tests, which are banned by UN Security Council resolutions.

U.S. officials are reported expressing hope for talks with North Korea but have stated that they will continue sanctions until the North takes concrete steps toward denuclearization. While announcing his intention to open communication with South Korea, Kim said the U.S. offer to talk was an attempt to hide America’s “hostile policy and military threats.” 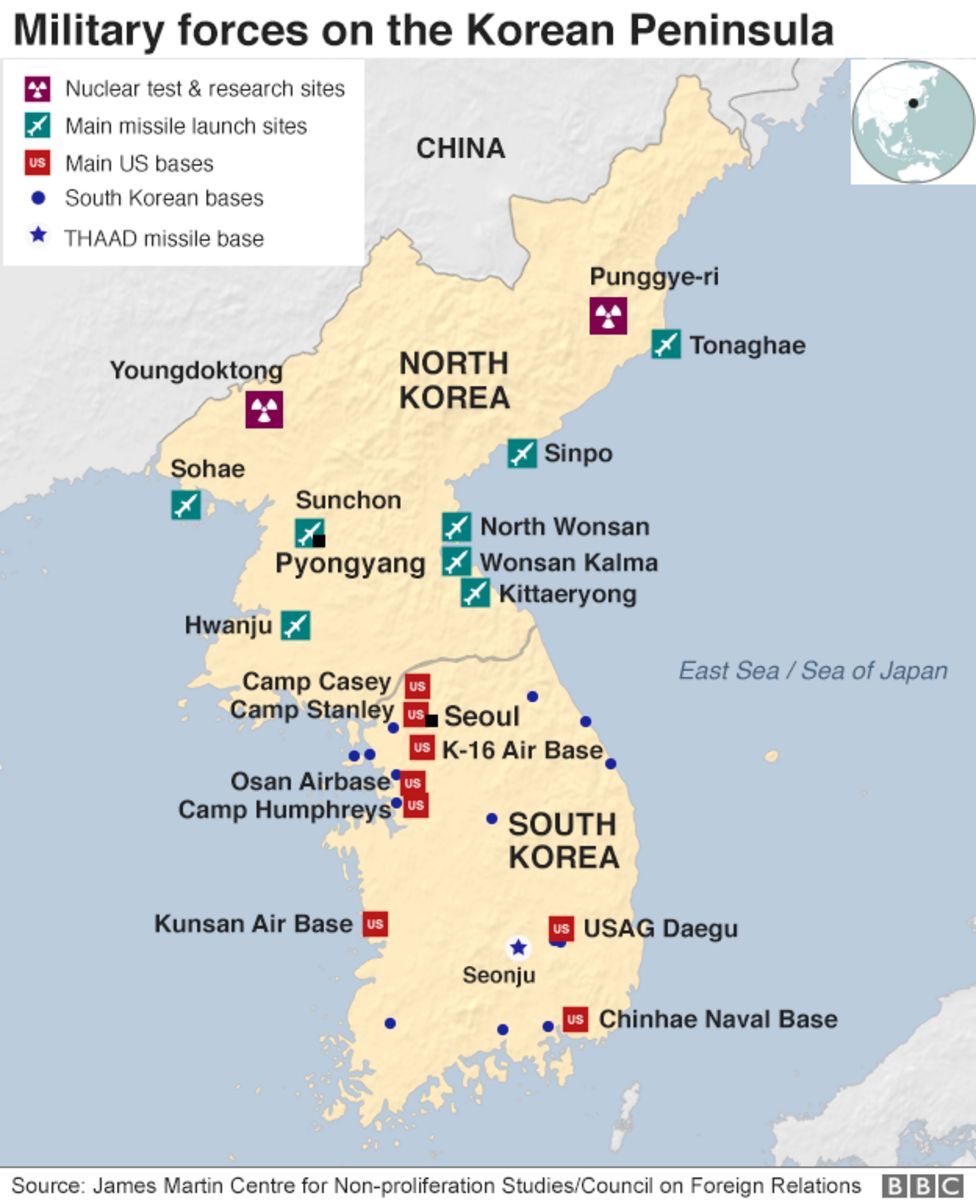 Military Bases on the Korean Peninsula

Korea Peace Now, a global movement of women mobilizing to end the Korean War, commissioned a report, “The Human Costs and Gendered Impact of Sanctions on North Korea.” Released in 2019, the report revealed that nearly 4,000 North Koreans died and millions more were at risk due to the impact of U.S.-led sanctions creating delays and shortages in the flow of aid.

What is the way out of this? Peace is possible on the Korean peninsula. The way is already being led by grassroots activism. The coalition of organizations and activists, Korea Peace Now, have been mobilizing for the United States, North Korea, South Korea, and China to end the Korean War, sign a peace agreement, and include women in the peace process.

Polly Mann is a co-founder of WAMM and regular contributor to this newsletter. Mary Beaudoin contributed to this column.

Call your congressional representatives to support this legislation recommended by Korea Peace Now:

Korean Quarterly: (koreanquarterly.org), a national publication based in the Twin Cities with news and information related to Korea.

Donate
By Rise Up TimesPublished On: January 15th, 20222 Comments